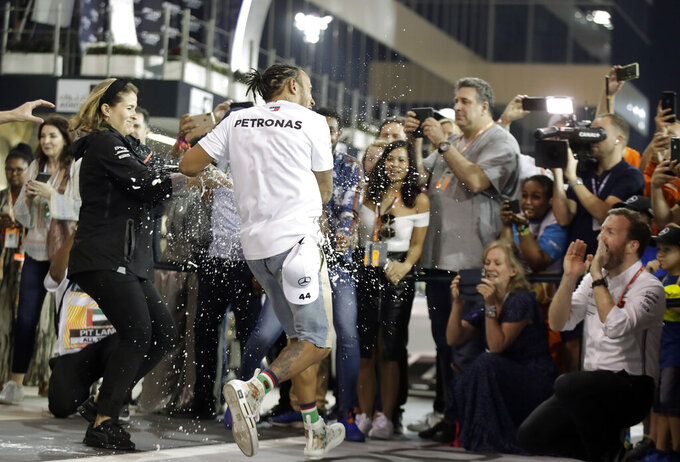 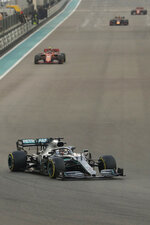 ABU DHABI, United Arab Emirates (AP) — World champion Lewis Hamilton’s 11th victory of another dominant season proved so easy that the driver who finished way back in second place at the Abu Dhabi Grand Prix joked that he should have eased up a bit.

“I wasn’t expecting to have the pace advantage to that extent,” Hamilton said.

After Hamilton pulled clear from pole, he was five seconds ahead within 10 laps and Verstappen never got remotely close to catching his Mercedes in a season-finale resembling more of a coronation procession for the six-time Formula One champion.

“I do wish we had some battles,” Hamilton said to Verstappen, sitting alongside him in the post-race news conference.

“You could have slowed down,” Verstappen joked, after his ninth podium of the season saw him consolidate third place in the standings behind the Mercedes pair of Valtteri Bottas and Hamilton.

Although Verstappen had reliability issues approaching the midway point of the 55-lap race, the 22-year-old Dutchman conceded it had little impact on who won.

“We drove around the problem,” he said. “But it wouldn’t have made any difference today (in terms) of winning the race.”

After clinching a record-extending 88th career pole, Hamilton won on the Yas Marina circuit for the fifth time in his career— four with Mercedes and once when driving for McLaren in 2011.

This was the opposite of the season-ending thriller in 2016, when former Mercedes driver Nico Rosberg beat Hamilton to the title in dramatic fashion.

The fans watching as the sky darkened and the floodlights flickered on saw no overtaking, except for Verstappen’s clean move on Charles Leclerc’s Ferrari on Lap 33. It was typical Verstappen, already a young master at overtaking and arguably the best in F1.

Leclerc finished third for a 10th podium in a strong first season with Ferrari, which included an F1-leading seven poles — two more than Hamilton and Bottas — and two wins.

However, Ferrari was summoned for a post-race investigation because there was a difference between the amount of fuel in the car declared by the team and the amount inside the car.

Ferrari was found to have inaccurately declared the amount and fined 50,000 euros ($55,000), but no action was taken against Leclerc.

Leclerc only just held off Bottas, who climbed 16 places to fourth after starting last.

Sebastian Vettel started fourth and finished fifth in a disappointing end to a season where the four-time F1 champion won only once — in Singapore — out of 21 races.

After Hamilton’s clean getaway, Verstappen was overtaken by Leclerc and just held off Vettel on the first lap, which saw Pierre Gasly’s Toro Rosso sandwiched between both Racing Point cars and forced to pit for a new front wing.

Ferrari pitted both drivers for new tires on the 13th lap, but while Leclerc’s tire switch was relatively good, Vettel’s took several seconds too long because the mechanics struggled to fit his front left tire on.

It was the latest basic mistake from Ferrari in yet another season marred by errors following similar blunders in the past two seasons.

Ferrari replaced Maurizio Arrivabene with Mattia Binotto as team principal, but Binotto has not managed to stem the flow of mistakes.

Leclerc finished fourth in the standings and Vettel was a lowly fifth.

"We didn't have the year we were hoping for, full stop. The reasons are clear, the lessons are clear and it's up to us to take them on board,” said Vettel. “As a team we must perform stronger, and as an individual I can do better.”

Although dull, Sunday’s race underlined the superiority shown by Hamilton for much of the year.

When he pitted about halfway through the race, such was his comfort zone that he still came out six seconds clear of Leclerc, while an anxious Verstappen complained about engine, braking and throttle issues.

Still, the audacious Dutchman found some extra speed to overtake Leclerc and assuredly held the Monegasque driver off as he tried to overtake him back down the right.

Ferrari pitted both drivers simultaneously again on Lap 39, and this time the tire changes were both fairly smooth.

Leclerc finished a massive 43 seconds behind Hamilton but had built up just enough of a lead to hold off Bottas by .9 seconds.

“Valtteri was very quick towards the end,” Leclerc said. “I was pretty worried at one point.”