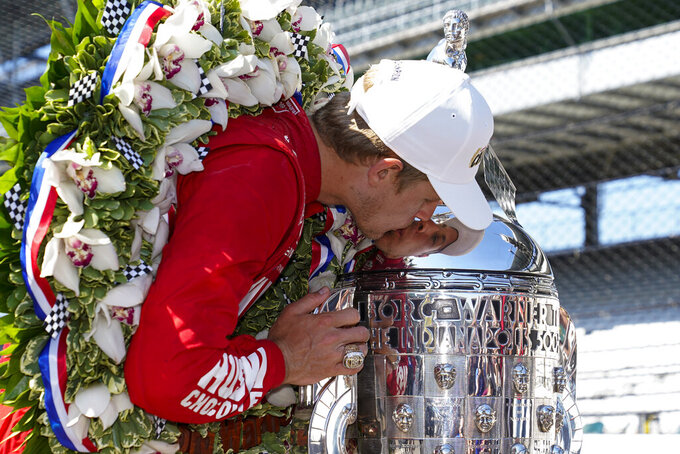 Ericsson on Sunday became the second 500 winner from Sweden and his homecoming later this summer could be fit for a king.

“I’m planning to go home for mid-summer, that could be a good mid-summer party, right?” Ericsson said after winning with Swedish company Huski Chocolate as his sponsor.

First, Ericsson must complete a weeklong victory tour. Then it's on to Detroit, where he won his first career IndyCar race last June and then a race at Road America. The 31-year-old doesn't mind the busy schedule considering the long, arduous path he took to join his mentor Kenny Brack atop the world of IndyCar racing. Brack won the 500 in 1999.

Ericsson's rapid ascension is likely to keep the interest in American racing percolating throughout Europe.

Ericsson's trek to the top of the victory podium at Indianapolis Motor Speedway spanned 97 winless Formula One starts and then an uninteresting rookie IndyCar season with Schmidt Peterson Motorsports in 2019.

Then he bought a ride with Chip Ganassi Racing, leaned on the strength of the organization and advice from Brack, and logged a pair of victories last season. Then came the Indy 500 win, which hardly surprised Brack at all.

“It’s great to see, so a big congratulations,” Brack said while calling into Ericsson's post-race news conference. “I don’t think you realize yet what this means for your career, but you will find out in time.”

The Ericsson victory is a win for Sweden and IndyCar, too.

IndyCar has always had a strong South American presence but now boasts Pato O'Ward of Mexico, the runner-up Sunday to Ericsson, and Simon Pagenaud and Romain Grosjean of France and British drivers Jack Harvey and Callum Illot.

“I can’t even pronounce those guys' names because they are Swedish, but I think all these guys are watching what’s happening and they should,” the Brazilian said. "If you have enough talent, why don’t you come to a place where if you’re good, you’re going to have your opportunity?”

Rosenqvist and Ericsson certainly found it in America.

They made the jump together after Rosenqvist's F1 quest ended. He initially landed with Ganassi's team, earning 2019 rookie of the year honors and his first career win at Road America in 2020.

Rosenqvist moved to Arrow McLaren SP last year, and while he hasn't yet returned to victory lane, the 30-year-old has won one pole and was in contention for the win Sunday before finishing a career-best fourth to put a pair of Swedes in the top-four.

“Obviously, people that follow me and Marcus, the word kind of gets spread around,” Rosenqvist said. “There was a big spike in 2019 when we both came here and now it’s a consistently growing fan base in Sweden. With all the new talent in Sweden, I think we have a good future in the U.S."

The question is how much will Ericsson's big victory help?

Drivers with previous Formula One experience, such as Ericsson, Grosjean and Takuma Sato of Japan, have found more success in America than overseas and there's no indication the influx of talent or opportunities are abating.

The series already fields 26 full-time entries, its highest total in a decade, and at least three additional teams — Cusick Motorsports, Paretta Autosport and Dreyer & Reinbold Racing — would like to run full time.

That could open the door to even more international drivers — maybe even Swedes eager to follow Ericsson.

“It’s something you dream of for so long. To actually do it, you have to pinch yourself,” he said. “All that support (from Sweden) is very important to me. I’m extremely thankful for that. I hope they enjoyed that moment."