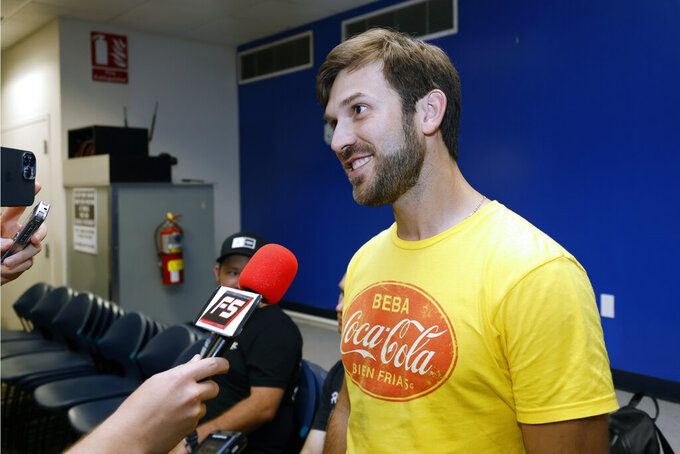 DAYTONA BEACH, Fla. (AP) — Daniel Suarez says he was never concerned about his racing future and insists he won't be down the road despite signing a one-year contract extension with Trackhouse Racing for 2023.

Suarez made it clear Friday that he accepted a short-term deal with the belief that it could lead to long-term job security once NASCAR and its teams have more financial clarity once the racing series lands a new media rights deal. The next deal should be known by the end of next year.

“We decided to do it this way for now,” Suarez said. “The same way that I wasn't worried about this contract I'm not really worried about next year, either. ... Trackhouse is my home now. They know that and we're working together extremely well."

The 30-year-old Suarez, who joined Trackhouse before its inaugural season in 2021, won his first race this year and is locked into the playoffs. He took the checkered flag at Sonoma Raceway in June, becoming the first Mexican-born driver to win in the NASCAR Cup Series.

He said the sides have been talking about an extension since.

The deal provides some stability for Suarez, who bounced around for the first four years of his Cup career. He began at Joe Gibbs Racing in 2017, moved to Stewart-Haas Racing in 2019 and then landed at Gaunt Brothers Racing the following year.

Suarez currently ranks 12th in points heading into the regular-season finale at Daytona.

His contract is the latest in a series of team extension announcements, including Joey Logano and Ryan Blaney at Team Penske and Bubba Wallace at 23XI Racing.

Thunderstorms washed out practice and qualifying at Daytona on Friday, leaving Kyle Larson on the pole for the regular-season finale.

Larson gets the pole because of a formula that puts significant emphasis on last week’s finish; Larson won at Watkins Glen.

Hendrick Motorsports teammate Chase Elliott, who was involved in a controversial ending with Larson at the Glen, will start on the outside of the first row. Joey Logano and Suarez will be on Row 2.

Aric Almirola is putting off retirement and remaining at Stewart-Haas Racing for at least another year, maybe more. Almirola signed a multiyear agreement with SHR that includes more financial backing from longtime sponsor Smithfield Foods.

The 38-year-old Almirola, who is completing his 11th consecutive year with Smithfield as a sponsor, said Friday he discovered a new balance between family and racing in 2022. His wife and two kids joined him for most race weekends as they turned the work trips into mini-vacations by visiting ballparks and hitting tourist spots across the country.

They visited the St. Louis arch, took in baseball games in St. Louis, Philadelphia and Detroit, and took a road trip between Phoenix and Las Vegas that including a hiking excursion to Zion National Park in Utah.

“I have found a renewed sense of what a work-life balance looks like," Almirola said, adding that his family will have made 28 races by the end of the year. “We've just really taken this year to embrace it and soak it all up, and I think as a family we're not ready for it to end yet.”

American tool company Craftsman will return as title sponsor of NASCAR’s Truck Series beginning in 2023. Craftsman served as the title sponsor from the truck series’ inception in 1995 through 2008.

Camping World has been the title sponsor since. But Camping World CEO Marcus Lemonis announced in July that his company would leave NASCAR at the end of the 2022 season. Lemonis said his company wanted to focus on increasing worker salaries and benefits.

Longtime Hendrick Motorsports crew chief Greg Ives is stepping away after 17 seasons in NASCAR, the last five with Alex Bowman. The 42-year-old Ives worked with Bowman on the No. 48 Chevrolet the last two years. He previously worked with Dale Earnhardt Jr. (2015-17) on the No. 88 before Bowman replaced Earnhardt in that car.

“There are many reasons, but the most important one is the chance to focus on my family and spend more time with our kids as they grow up,” Ives said in a social media post.