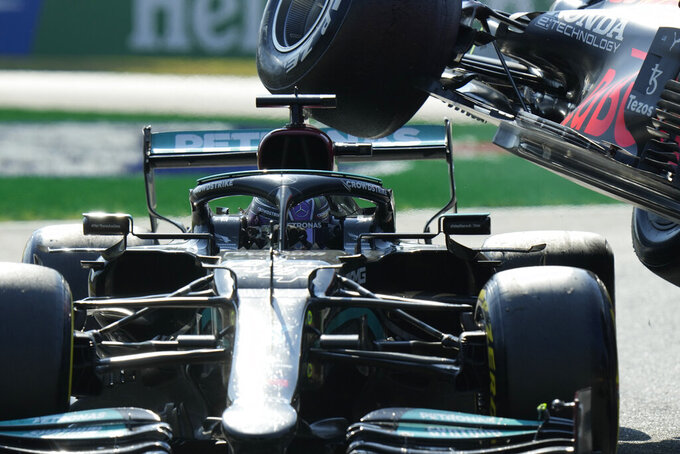 Last race: Kyle Larson passed Kevin Harvick with less than four laps to go at Bristol and won his series-best sixth race of the season.

Fast facts: Aric Almirola, Tyler Reddick, Kurt Busch and Michael McDowell were eliminated from the playoffs as the field was winnowed to 12 drivers. ... Harvick finished second. after being blocked by Chase Elliott He won nine times last season but has now gone 36 races since his last victory. He’s last in the still-in-the-playoffs standings. ... Martin Truex Jr. is 30 points behind Larson. Denny Hamlin and Ryan Blaney are 35 back. Kyle Busch is 37 behind, just ahead of defending champion Elliott.

Last race: A.J. Allmendinger passed Justin Allgaier and Austin Cindric on the last lap of overtime and won at Bristol, giving him the regular season championship.

Fast facts: Allgaier led 92 laps at Bristol, Daniel Hemric led 78 and Cindric led 75. Allmendinger led only one lap — the last one. ... Brandon Jones, Riley Herbst and Jeremy Clements clinched the final three spots in the 12-driver playoffs. ... Cindric and Allmendinger begin the playoffs tied, with Allgaier 24 points back. ... Cindric has led 723 laps, three more that Allmendinger (355) and Algaier (371) combined. Hemric has not won, but his 510 laps led rank second.

Fast facts: Smith advanced to the round of eight in the playoffs with the victory. ... Creed, the winner of the previous two races, led 189 of the 200 laps. ... Creed is 24 points behind John Hunter Nemechek, who finished third. Ben Rhodes is 31 back, Zane Smith is 41 back and Chandler Smith is 44 behind.

Fast facts: Alex Palou, the only three-time winner this season, finished second last weekend and expanded his points lead from 25 to 35 over Pato O'Ward heading into this season finale. Paloucan clinch his first IndyCar championship if he finishes 11th or better. Josef Newgarden is third, 48 points behind.