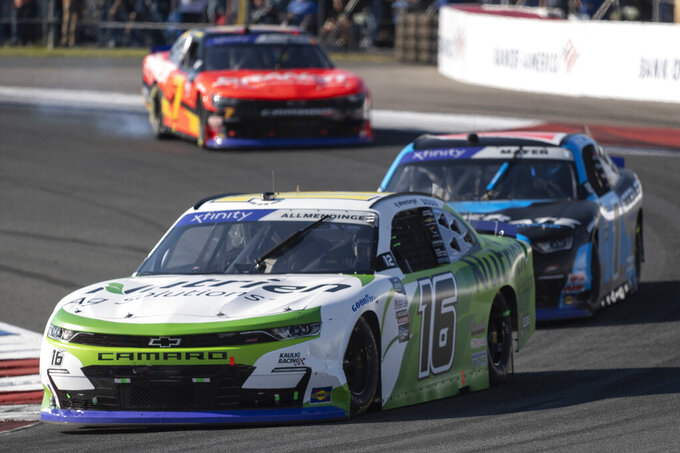 CONCORD, N.C. (AP) — It took two overtimes Saturday for AJ Allmendinger to remain undefeated on The Roval at Charlotte Motor Speedway and seize the momentum for the next round of the Xfinity Series playoffs.

Allmendinger led the entire first stage but slipped back into traffic after a round of pit stops and didn't get another shot at extending his streak until a series of late cautions. He took the lead on the first overtime restart by passing leader Ty Gibbs, then made it stick when another caution forced a second overtime and another two-lap shootout.

“Ty was really good there at the end, and I didn't know if I was going to be able to get him,” Allmendinger said. “I knew if I could just get to one restart on the outside of him, at least we had a chance.”

Allmendinger earlier this week announced he's returning to full time Cup Series racing next year with Kaulig Racing, the team that lured him out of retirement with partial Xfinity Series schedules while leaning on the veteran to help it build a two-car Cup team.

The win was the fifth of the season for Allmendinger, who said “we stole that one” after collecting the checkered flag for the 10th time in his career in an Xfinity Series road course race.

Advancing into the next round were Allmendinger of Kaulig Racing, the entire four-car fleet from JR Motorsports of Noah Gragson, Justin Allgaier, Sam Mayer and Josh Berry, as well as Brandon Jones of Joe Gibbs Racing and Austin Hill of Richard Childress Racing.

Ty Gibbs finished second and was followed by Gragson and then James Davison in his first NASCAR race of the season.

Marco Andretti made his NASCAR debut for Big Machine Racing and was having a decent race until a late crash. He hit a disabled car stranded on the track in a place his spotter couldn't see to warn Andretti in advance.

Andretti, who broke his wrist while winning the SRX all-star summer series, said he tweaked the injury in the collision.

“My reflexes were a little better this time. I was worried about that,” Andretti said. “I didn't know anybody was sitting in the middle of the track. Of course, it's my luck it's the only corner the spotter couldn't see. It was fun up until that point.”

The longtime IndyCar veteran said his NASCAR learning curve was steep and he was just starting to enjoy the race when he crashed. He said he'd love to get back in a stock car.