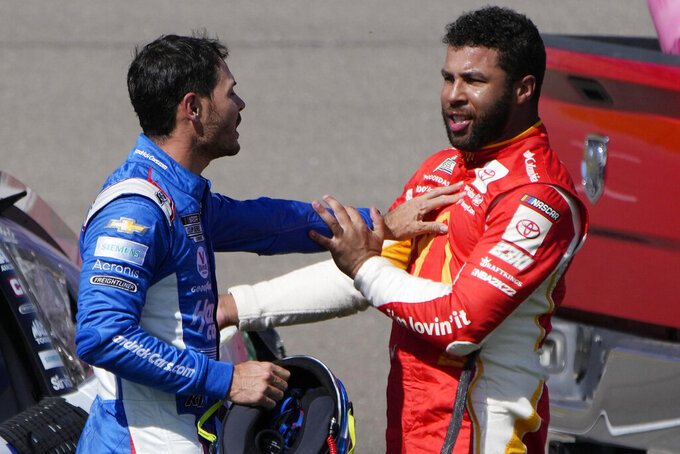 Bubba Wallace, right, and Kyle Larson push each other away after the two crashed during a NASCAR Cup Series auto race Sunday, Oct. 16, 2022, in Las Vegas. (AP Photo/John Locher)

Wallace had led 29 laps and clearly had a fast car in the opening race of the third round of the playoffs. Wallace did not qualify for the playoffs, and Larson was eliminated last week.

The incident began when Larson attempted a three-wide pass — Kevin Harvick in the middle dropped out of the bunch — and Larson slid up the track against Wallace. When Wallace didn't lift to give Larson any room, Larson used his Chevrolet to shove Wallace's Toyota into the wall.

Wallace then bounced back down the track, followed Larson's car down to the apron and appeared to deliberately hook him in retaliation. That sent Larson spinning into the path of Bell, who won last Sunday at Charlotte to earn the automatic berth into the round of eight, and ended Bell's race.

Wallace climbed from his car and marched his way toward Larson. Wallace was shouting before he even got to Larson and immediately began to shove the smaller driver. Larson tried to turn away from him and several times lifted his arms to block Wallace's shoves, but Wallace got in multiple shots before a NASCAR safety worker separated the two.

Wallace claimed he didn't deliberately wreck Larson, but both Larson and Bell viewed it as clear retaliation. NASCAR could penalize Wallace if it also believes he deliberately retaliated.

“I'm smart enough to know how easily these cars break, so when you get shoved into the fence deliberately like he did trying to force me to lift, the steering was gone,” Wallace said. "Larson wanted to make a three-wide divebomb, but he never cleared me and I don't lift.

“I know I'm kind of new to running up front, but I don't lift. I wasn't even at a spot to lift and he never lifted, either, and now we're junk. Just (very bad) move of his execution.”

Asked what message he was trying to send to Larson when he began shoving him, Wallace said, “He knows.”

“He knows what he did was wrong. He wanted to question what I was doing, and he never cleared me,” Wallace said.

And as for Bell becoming collateral damage?

“Sports," Wallace, who like Bell is a Toyota driver, said with a shrug.

Larson, who hit the wall last week at Charlotte to contribute to his playoff elimination, said he wasn't surprised Wallace hooked him.

“I obviously made an aggressive move into (turn) three, got in low, got loose and chased it up a bit,” Larson said. “He got to my right front, and it got him tight and into the wall. I knew he was going to retaliate. He had a reason to be mad, but his race wasn’t over until he retaliated.

"It is what it is. Just aggression turned into frustration and he retaliated.”

He thought Wallace's crashing of Larson was inappropriate considering how much scrutiny NASCAR has been under concerning its new Next Gen car. Alex Bowman, who is Larson's teammate at Hendrick Motorsports, is out for a third consecutive race with a concussion and Kurt Busch has been forced to step away following his July concussion.

“I think with everything that’s been going on here lately, with head injuries... I don’t think it’s probably the right thing to do,” Larson said. "I’m sure with everything going, he’ll know that he made a mistake in the retaliation part and I’m sure he’ll think twice about that next time.”

He also said he expected Wallace to be ready to fight when Wallace approached his crashed car.

“I saw him walking over, so I figured he would do something,” Larson said. “He had every right to be upset. I would rather him do that (fight) than tear up our cars in a dangerous manner.”

Bell, who will be scored 34th on Sunday and likely drop to last in the eight-driver playoff standings, said "we got the short end of the stick” with Larson and Wallace tangling.

“It’s disappointing because our performance is capable of racing for the championship, and it doesn’t appear that we’re going to get to," he said.