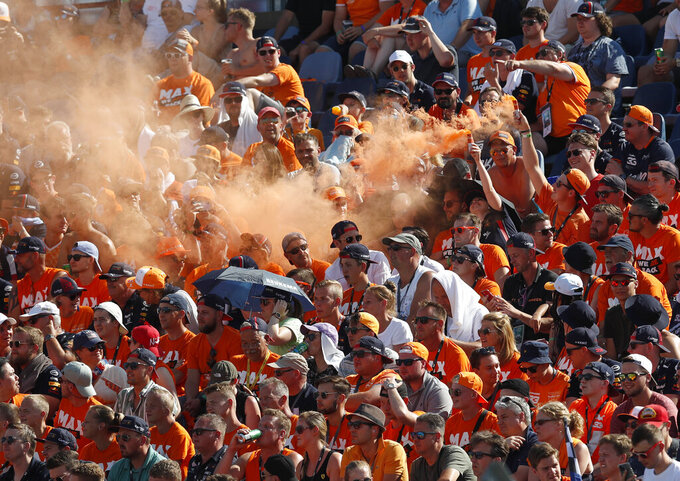 SPA-FRANCORCHAMPS, Belgium (AP) — Max Verstappen had a few weeks to ponder how his sizeable lead in the Formula One championship was eaten up by Lewis Hamilton in just two races.

Now the Red Bull driver must focus his mind on checking the Mercedes star’s momentum, starting at this Sunday’s Belgian Grand Prix, where a thrilling season resumes following its mid-season break.

Hamilton leads Verstappen by eight points after 11 races of a season which has produced the best wheel-to-wheel racing for years and a thorny rivalry between two gifted drivers.

Hamilton clawed back a 33-point deficit but the manner of his comeback angered Verstappen. He was leading the British GP from pole position and was sent flying off track by a risky Hamilton overtaking move at the lightning-fast Copse corner that led to a time penalty.

Verstappen was unlucky in the following race at the Hungarian GP, where he was one of several drivers to go off track following a clumsy first-lap mistake by Hamilton’s Mercedes teammate Valtteri Bottas.

He recovered to eighth place despite driving a damaged car, but Hamilton finished second and moved ahead overall.

Understandably, Verstappen may feel annoyed considering he leads Hamilton 5-4 in wins, 5-3 for pole positions and 4-3 for fastest laps so far.

Yet, for reasons largely out of his control, he trails in the standings.

“It’s a lot of freak moments which cost us a lot of points,” he said. “I will be there again, I will try my very best, and of course I hope my car is going to be competitive.”

The 23-year-old Dutchman can count on huge support Sunday from orange-clad fans who will make the short trip from nearby Netherlands. Last year the stands were empty because of coronavirus regulations.

“It will be cool to see so much orange in the grandstands again,” he said. “I also think it is a good place to re-set our championship fight and I’m well prepared.”

He will need to be.

For Hamilton has renewed momentum as he bids for a 100th career GP win, and a record eighth F1 title to pull ahead of Michael Schumacher and stand alone among F1 greats.

But Hamilton has been pushed harder than at any time since his then-Mercedes teammate Nico Rosberg won the 2016 title.

Red Bull’s speed allied to Verstappen’s relentless intensity have tested the resilience of a Mercedes team long used to dominating.

“This has been one of the most intense F1 seasons that I can remember. The battle is far from over,” Mercedes head of motorsport Toto Wolff said. “The W12 (car) feels in a better place, after the upgrades introduced at Silverstone and an encouraging showing in Hungary.”

Hamilton’s lights-to-flag win here last year was his first at the circuit since 2017.

It was his fourth overall at the famed track, putting him level in third place for most wins with the late Jim Clark and 2007 F1 champion Kimi Raikkonen — who is still driving at age 41 with Alfa Romeo.

The 7-kilometer (4.3-mile) track nestled in the thick Ardennes forest is the longest in F1 and an estimated 82 % of the race is at full throttle.

With its unpredictable weather, iconic corners such as Eau Rouge, high G-force, brutal elevation changes and long straights for overtaking, Spa-Francorchamps has a unique appeal for drivers.

It also became a firm favorite for the Schumacher family.

Michael Schumacher made his F1 debut here in 1991 and won the first of his record six Belgian GP titles — and 91 F1 wins — at Spa the following year.

His son Mick Schumacher, who is driving in his first F1 season, registered his first F3 pole position and win here in 2018.

He will hope for his first F1 points after a difficult start to the season with Haas.

“I’m driving in a Formula 1 car 30 years after my dad made his debut. It’s a really special moment for me and my family,” the 22-year-old Schumacher said. “Spa is my favorite track in any circumstance. It’s such a special track to us as a family.”