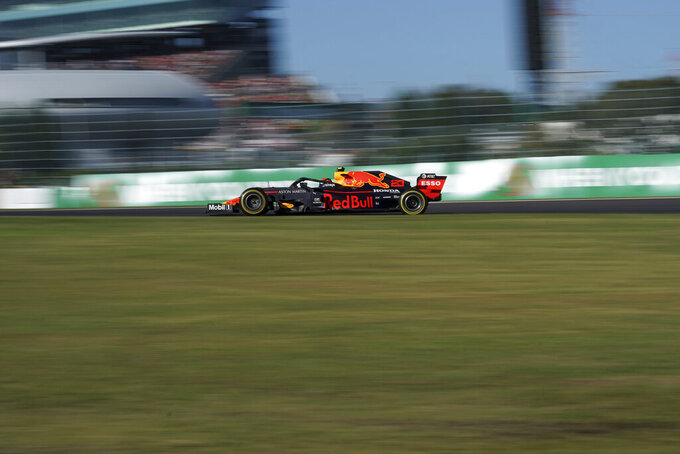 Red Bull driver Alexander Albon of Thailand steers his car during the Japanese Formula One Grand Prix at Suzuka Circuit in Suzuka, central Japan, Sunday, Oct. 13, 2019. F1 has always had a solid following in Southeast Asia. Having Albon performing as well as he is will only add to the sport's popularity in the region.(AP Photo/Toru Hanai)

SUZUKA, Japan (AP) — Formula One has always had a solid following in Southeast Asia. Having Red Bull driver Alexander Albon performing as well as he is will only add to the sport's popularity in the region.

Albon recorded a fourth-place finish in Sunday's Japanese Grand Prix for his best result of the season, an indication that a podium finish is not too far off for the Thai driver.

"Fourth is my F1 career best finish and this weekend has definitely felt like my best with the team," Albon said. "Immediately from (the first practice) I felt comfortable with the car and the balance, which is important for a track like Suzuka where you need a lot of confidence, especially on your first visit."

After making his 2019 Formula One debut with Toro Rosso at the Australian Grand Prix, Red Bull announced in August that Albon would replace Pierre Gasly in the senior team with the swap effective from the 2019 Belgian Grand Prix where Albon rose from 17th on the grid to finish fifth, a result he matched in Russia.

"Obviously it's a big step, first year in Formula One and then being with the big team," Albon said. "You're with a team that has had a lot of previous success, world championships as well. So it was a bit nerve-racking but the team has been good to me. The first four races have been pretty good but you always want a little more."

While in Japan, the 23-year-old spoke of his Thai heritage and the enormous support he felt on a recent trip to Thailand.

"Obviously, Thailand doesn't have a big motorsport background," Albon said. "But it's certainly getting bigger and to race under the Thai flag I feel like I'm representing the country but also Asia in some respects. I've gone to Thailand three times this year already and every time I go there I realize how big it's getting."

After Sunday's impressive showing in Suzuka, Albon is on 64 points and ranked eighth in the drivers' standings.

And he hopes for a chance to one day wave the Thai flag on the winner's podium.

"To show that Thailand can compete in the top level, would always be a dream of mine," Albon said. "So we'll see but I'm not putting pressure on myself to say I need to finish in the top three, I think that's kind of the wrong way to approach it but hopefully I keep improving every race, and getting more comfortable with the car and by the end of the year, who knows?"