Reddick's jump to 23XI a start for NASCAR driver shuffling 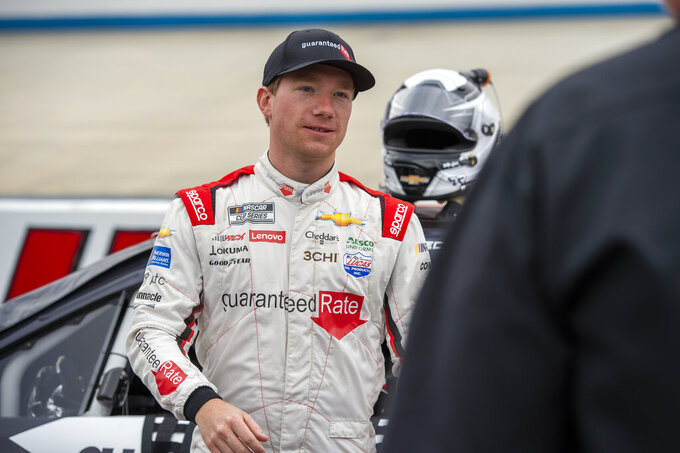 Well, that’s one driver off the free-agent market.

Kyle Busch still wants a new deal for 2023, and yes, the long-time Joe Gibbs Racing driver has shopped himself to other teams. Kurt Busch and Bubba Wallace both want to stay with 23XI for as long as the team will let them drive -- even with no concrete plan to add a third car.

The Stewart-Haas Racing driver had announced this season in the No. 10 Ford would be his last before he called it a career, saying he wanted more time with his family. Almirola, the defending New Hampshire Motor Speedway race winner, has recently hedged on his decision and said he’d be open to driving a few races next season, especially if sponsor Smithfield was on board.

The final months of the NASCAR season could be as much about as who signs where than who wins it all.

Kyle Busch, in a pickle once M&M Mars pulls its sponsorship at the end of the season, would love to chase a third Cup championship at JGR without the weekly headache of talking about his contract.

Dave Alpern, president of Joe Gibbs Racing, said he intended to have Busch back next year. Toyota Racing Development President David Wilson said the manufacturer was “working diligently, with hand-in-glove,” to keep Busch in the JGR fold.

Busch said Saturday a new contract “would be nice, sooner than later.”

“But honestly, it doesn’t matter how soon or late it gets done,” Busch said. “Until there’s an announcement that somebody else is driving the 18 car, then I feel like I still have a seat.”

It seems almost inconceivable that a two-time Cup champion with 222 wins across NASCAR’s three national series hasn’t yet signed a contract. But sponsorship deals are prickly and championship-level rides are scarce, leaving Busch with few realistic options. The 37-year-old Busch offered no specifics but said he has talked with other teams and said “anything’s possible” for 2023.

Big brother Kurt played coy with his future at 23XI. He’s teased retirement in the past and for a driver who turns 44 next month, there are far more checkered flags behind him than what’s ahead. Hamlin promised Busch both a ride for as long as he wanted and a “cushy office job” in retirement. Busch spoke in a word salad about blue skies and chess pieces and puzzles and paved roads but nothing about a firm retirement season.

Either way, Hamlin, a three-time Daytona 500 champion, believed that signing Reddick stamped 23XI Racing as a player in free agency.

Wallace, the lone Black driver in the Cup Series, won the first race for 23XI last season at Talladega and said he wants to remain with 23XI for the long haul. 23XI Racing President Steve Lauletta also will have a say in the roster.

“I took this opportunity when it was just an idea,” Wallace said. “I had a solid team going where I was at in the 43. I took a leap of faith based on an idea. I’ve told Denny and Steve and MJ and all these guys, this is where home should be for a very long time. As long as we keep doing what we’re doing, we actually need to do a lot better this year, that’s what we’re focused on. One race to brag about, the Daytona 500. That’s it.”

Reddick, a two-time Xfinity Series champion, sure has bragging rights. He is coming off his breakthrough first career Cup victory on July 3 at Road America and landed a fantastic ride at 23XI.

But he didn’t have to look far to find some haters.

RCR blasted the move in a tweet -- released while Reddick was still on the 23XI video call announcement -- when it wrote the “timing of this announcement could not be any worse.” RCR driver Austin Dillon, the 2018 Daytona 500 champion, also called out the timing of the deal.

Reddick might want to ask Kevin Harvick for advice on how to handle a lame-duck season at RCR. Harvick won four races and finished third in the 2013 standings in his final year before he moved to Stewart-Haas Racing in 2014. Harvick told Childress before a race at Phoenix in 2012 -- that he won -- that he would leave the organization. And yes, there were hard feelings that took time to mend.

“I think it took probably a couple of years just to have really good, meaningful conversations,” Harvick said.

Harvick called the 2013 season “less awkward” than it might have been because the team was successful.

Dillon said Reddick assured him he was committed to racing for wins and championships as long as he was still with the team. Reddick said there had been no talks about racing elsewhere next season in a stopgap year to end any potential uneasiness.

“I’ve got plenty time of left to continue to do what I wanted to come to RCR and do, and that’s win races and put ourselves in contention,” Reddick said.

Almirola suddenly put himself in play for 2023 but said he had nothing lined up.

“The chatter turns into real chatter, more questions are getting asked by decision-makers, not just (the media),” he said. “It puts that in my head to where I should at least give it thought. As of right now, as I said, I don’t have anything new to add.”

SHR could move on from Almirola with a younger, cheaper driver; 31-year-old Ryan Preece is already at SHR as a reserve driver.

One potential candidate to scratch off the list of Almirola replacements is Erik Jones. Jones said he’s deep in talks to return next season to Petty GMS Motorsports. Jones’ teammate, Ty Dillon, is leaving GMS at the end of the season. Noah Gragson, who has two wins this season in the Xfinity Series, could replace Dillon.