Malukas dazzles racing through field and against Penskes 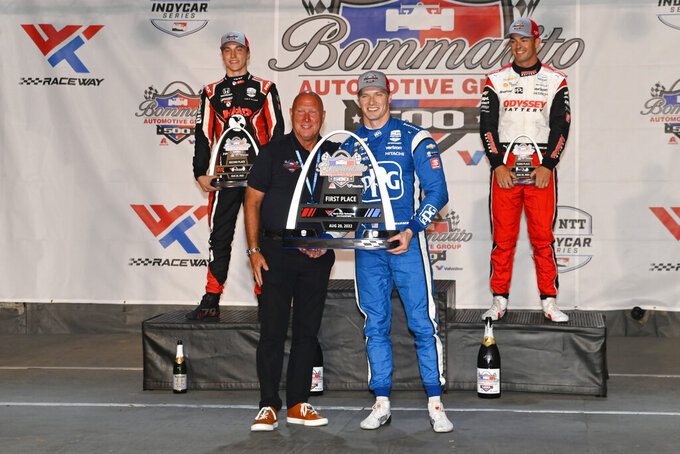 MADISON, Ill. (AP) — Josef Newgarden saw the checkered flag out his windshield as the hard-charging rookie sprinted closer and closer into his rearview mirror.

David Malukas was coming fast for the leaders, seemingly out of nowhere, late Saturday night after a long rain delay and a strung-out race.

The 20-year-old was flying and darted outside and around Scott McLaughlin for second. Then he set his sights over the final lap on Newgarden, the two-time IndyCar champion so far unable to take control of the championship race.

Alas, Malukas ran out of time on the 1.25-mile oval outside St. Louis. He picked off McLaughlin, and if there had been one more lap, Malukas might have won his first IndyCar victory.

He's still learning oval racing, even though his results show he's a quick study. His 16th-place finish in the Indianapolis 500 was his lowest of the five ovals on the schedule; his second-place finish Saturday night was the best of his maiden IndyCar season and his first career podium.

And yet he's left to wonder if a rookie mistake cost him a chance at running down Newgarden for the win at Gateway.

On fresh tires for the final run of the night, Malukas waited until two laps to go to experiment with the upper groove at Gateway. His car like a rocket ship in the top lane, he sailed past McLaughlin on the outside. Although he ran out of time to catch Newgarden, Malukas was closing in quickly when Newgarden took his series-best fifth win of the season.

What took him so long to try the outside lane?

“It was a bit unfortunate I did it so late. But I guess rookie season, rookie stuff,” Malukas said. “I’m going to put it in the back of my brain and remember it for next time.”

It wasn't his only mistake of the night: Malukas was scolded by McLaughlin for mispronouncing his last name. It's Muh-GLOCK'-luhn, McLaughlin said, and there's no soft h.

Either way, second-place was just as good as the win on Saturday night for Malukas. He even got to celebrate with champagne when Newgarden graciously let the underage Malukas spray the real stuff instead of the grape juice he'd been given.

“Why didn’t they give me the real stuff? That’s not fun,” Malukas said. “Maybe I can just tell them I’ll close my mouth, I don’t know.”

Just three months ago he was smarting from losing Indianapolis 500 top rookie honors to Jimmie Johnson, who finished the race below Malukas but was rewarded for both an eye-popping speed show in qualifying and his ambassadorship for “The Greatest Spectacle in Racing.”

Malukas supporters were outraged and, after posting his own 200-plus mph marks in practice, as well as actually finishing highest among the Indy 500 rookies, Malukas himself wondered how he lost out on top rookie to 46-year-old Johnson.

Once the drama faded from social media, Malukas went back to big runs for tiny Dale Coyne Racing.

He finished eighth in the second race of the Iowa doubleheader last month and is ranked 16th in the standings, ahead of Indianapolis 500 winners Helio Castroneves and Takuma Sato, his teammate, and also the rest of the rookie class.

Newgarden heaped praise on Malukas after the race and said Malukas, a Lithuanian-American from the Chicago area, could probably get a little more aggressive. Newgarden is three points behind Team Penske teammate Will Power with two races remaining, yet he didn't worry about the potential risks of racing a rookie with Saturday night's win on the line.

“When you see rookies, I think you definitely are a bit more cautious or reserved, or at least you’re second-guessing what you think you should be doing,” Newgarden said. “I would give Malukas a lot of respect. He’s probably been one of the cleanest rookies I’ve ever seen. He’s been almost too respectful.”

Malukas acknowledged both getting out of the way of Penske cars during practice and also getting a little starry-eyed when he found himself racing Newgarden and McLaughlin.

His engineer radioed that Malukas was about to get sight of the race leaders and then he caught a glimpse of them sailing through Turns 1 and 2. It took a moment for him to realize that "Oh, my God, they’re Penskes. I’m going behind Penskes right now. This is crazy.’”

Malukas rooted for Team Penske as a kid and says he's stayed out of their way when he made it to IndyCar this season: “Every time through practice, every time they passed me, I always let them by. Man,” he said.

And so he had to collect himself as he chased the duo.