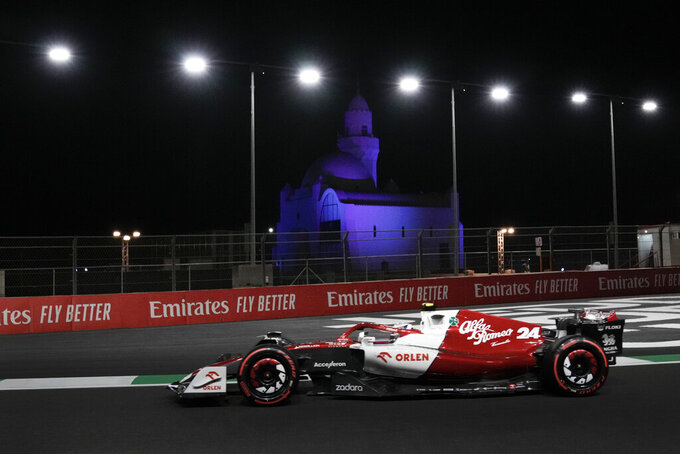 JIDDAH, Saudi Arabia (AP) — Formula One appeared on schedule to race Sunday at the Saudi Arabian Grand Prix after nearly four hours of meetings over attacks on the kingdom by Yemen’s Houthis rebels.

The 20 drivers on the grid met several times Friday in talks that stretched well past 2 a.m. at the track discussing safety concerns after an attack on an oil depot located about 11 kilometers (seven miles) from the F1 circuit.

The Houthis rebels acknowledged the attacks and Saudi Arabia state TV called it a “hostile operation." The Jiddah oil depot erupted in flames when attacked during Friday's first practice session. It caused a raging fire that rattled the drivers enough to hold extraordinary talks regarding F1's presence in Saudi Arabia.

Many drivers expressed their concerns about racing in the region and Saudi Arabia's human rights records when F1 ran its inaugural event at the circuit last December. Now back at the track a little over three months later, tensions are heightened amidst the attacks.

There was no immediate statement from F1 or the FIA, the governing body, but also no indication Sunday's race would be canceled. Conversations between drivers, team principals and F1 chief executive Stefano Domenicali centered on safety and security conditions.

Race promoter Saudi Motorsport Company said earlier Friday that the weekend schedule had not been changed and a third practice and qualifying were still slated for Saturday. Drivers were only leaving the track mere hours before they were due to return.

“We are aware of the attack on the Aramco distribution station in Jeddah earlier this afternoon and remain in direct contact with the Saudi authorities,” the SMC said in a statement. “The race weekend schedule will continue as planned. The safety and security of all our guests continues to be our main priority and we look forward to welcoming fans for a weekend of premium racing and entertainment.”

The attack targeted the North Jiddah Bulk Plant, the same fuel depot the Houthis had attacked five days earlier. The plant is just southeast of the city’s international airport, a crucial hub for Muslim pilgrims heading to Mecca.

The plant stores diesel, gasoline and jet fuel for use in the kingdom’s second-largest city. It accounts for over a quarter of all of Saudi Arabia’s supplies and also supplies fuel crucial to running a regional desalination plant.

The Houthis have twice targeted the North Jiddah plant with cruise missiles. One attack came in November 2020. The second attack was Sunday as part of a wider barrage by the Houthis.

An Associated Press photojournalist covering Friday's first practice saw smoke rising in the distance to the east, just after 5:40 p.m. local time. As the flames rose, the tops of the tanks of the bulk plant were clearly visible.

Charles Leclerc, the Ferrari driver who won last week's season-opening race in Bahrain, led both practice sessions. Drivers had seemed unaffected by the nearby explosions during first practice, but soon began a series of meetings to determine the fate of the race.