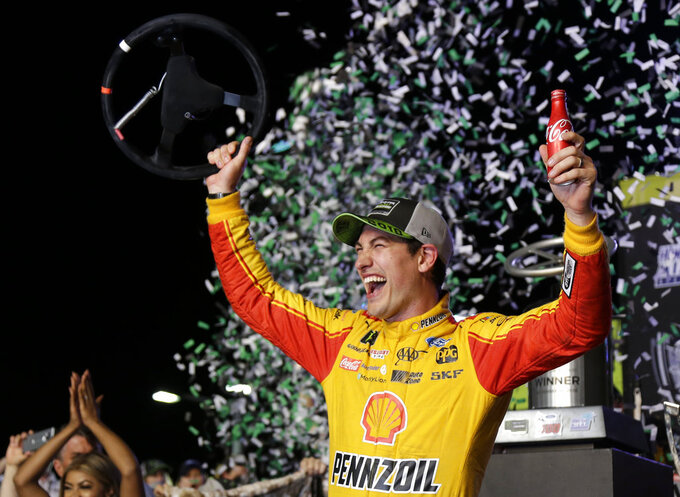 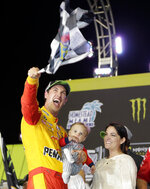 HOMESTEAD, Fla. (AP) — Joey Logano's team headed to South Beach long before NASCAR's newest champion wrapped up his obligations at Homestead-Miami Speedway. He was emotional, exhausted and still trying to comprehend how he'd chased down The Big Three to snatch his first career NASCAR title.

"I don't even know how to party," Logano said. "I guess I'm just going to follow whatever they do."

Team Penske was indeed waiting for the newly minted champion to arrive and show him how to celebrate — just another life lesson learned on the job for Logano.

Logano has literally grown up on NASCAR's national stage, transitioning from over-hyped teenager to seasoned veteran during a decade-long journey in which many of his experiences played out publicly and made him an easy target for his peers to push around.

Few knew what to make out of the gangly kid from Connecticut when Hall of Fame driver Mark Martin declared him NASCAR's next superstar. Logano got the nickname "Sliced Bread" even before his first NASCAR event, and after being held in development by Joe Gibbs Racing the team celebrated his 18th birthday with a sheet cake at Charlotte Motor Speedway.

Gibbs was ready to see Logano's promised talent and had him in a race one week after he was legally old enough to compete in NASCAR. Old enough but maybe not ready.

"I expected to go out there and win and just got my butt handed to me on a platter," Logano said.

Logano came to NASCAR as a raw talent unafraid of aggressive racing. His rivals thought he should know his place, and he struggled to live by the so-called driver code. It nearly ended his career as Gibbs let Logano go after five seasons that produced two wins but was marred by disputes with Kevin Harvick and Tony Stewart, among others.

Everything could have ended for Logano after that 2012 season.

"As a kid growing up, I was an aggressive racer and I was able to win a lot of races," Logano said. "I got humbled pretty quick. I got beat up. I got pushed around a lot. I wasn't fast. I didn't have no respect. I think that beats up on your confidence pretty quickly. There's a lot of times that I felt really weak, and I'd break down. You know, when you're confused, you don't know how to be better. You're 18 years old or 19 or 20, and this is some pretty big stuff for a teenager to be able to go through."

It was Roger Penske who rescued Logano from unemployment. Team Penske had an open seat alongside 2012 champion Brad Keselowski, who wanted Logano as his teammate.

The lifeline saved his career.

"I was losing my job at Gibbs, that was a pretty low point for me, and I don't think I thought as clearly as I do now," Logano said. "I was thinking, 'Oh my gosh, I'm not going to be a race car driver anymore,' and 'What am I going to do with my life? This is awful.' Next thing you know, there's the 22 car and Roger Penske."

Penske has backed Logano from the very first day and doesn't want his driver to change. It meant more incidents with other drivers, including a feud with Matt Kenseth that cost Logano a shot at the 2015 championship. Logano was the favorite but hard racing with Kenseth had created a fracture Logano was ill-prepared to fix. He thought by not backing down or pacifying Kenseth it would go away, but it only made things worse. Kenseth deliberately wrecked Logano in a race Logano was going to win and it cost Logano a slot in NASCAR's season-ending championship race.

That was the most difficult bump to date in Logano's climb.

It is also the one that likely helped him win the championship. It toughened him up and taught him a valuable lesson in handing adversity.

Logano found another gear at the start of the playoffs and outperformed Harvick, Kyle Busch and Martin Truex Jr., the so-called Big Three that dominated the regular season. Logano won twice in the postseason, including Sunday night's finale at Homestead-Miami Speedway, never thinking he couldn't win this title — even as the underdog in a heavyweight field and even in those frantic final moments after a late caution and restart when he had to mash the gas on the No. 22 Ford and go for broke.

In previous seasons, Logano had been a target for championship contenders in the lead up to the finale. They used NASCAR's mandatory promotional appearances to try to psyche Logano out of the title. He was likely susceptible to it, too. On the eve of the 2014 championship, when Logano was set to race against tough-as-nails Harvick, Logano admitted he binge-watched "Boy Meets World" with his wife to relax.

He's 28 now, the father of an infant son he and his wife struggled to conceive, and has a decade of experience navigating NASCAR. When NASCAR sent the title contenders out to promote the finale last week, Logano held his own, didn't let anyone get in his head and told everyone he was the favorite.

"You can't just be confident and say (things) because then it's just kind of BS, right?" Logano said. "You have to believe it inside. You honestly need to preach to yourself sometimes, and I do that as much as I can and to our race team, because we didn't have a reason to not feel confident. We've executed under high pressure situations before, and we've been here before. I just had to go do my job."