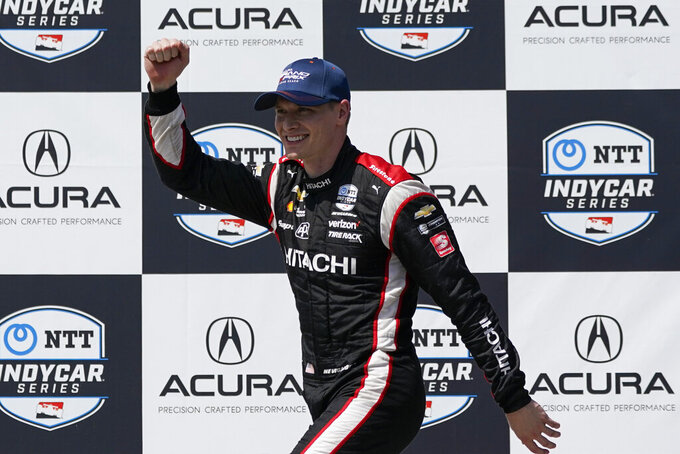 LONG BEACH, Calif. (AP) — Through just three races, the IndyCar Series is already building enough dynamic storylines to be worthy of its own Netflix program.

Speculation has been mounting that IndyCar, just like NASCAR and any motorsports series with a finger on the pulse of pop culture, is trying to put together a behind-the-scenes docuseries similar to Formula One's “Drive to Survive.” The show has led to an explosion in F1 popularity in the United States, the market every sponsor-seeking race entity in the world wants to crack.

Well, it's time to mic the IndyCar paddock, which has packed a season's worth of drama into the first three events with the Indianapolis 500 still seven weeks away.

Josef Newgarden has “The Greatest Spectacle in Racing” on his wish list and he is already talking about it. His first career Long Beach Grand Prix victory on Sunday kept Team Penske a perfect 3-0 to start the the season. Scott McLaughlin won the season opener, and Long Beach made it two straight wins by Newgarden, the two-time IndyCar champion who is 0-for-10 in the Indianapolis 500.

The American — he lives just outside of Nashville and his wife, Ashley, is expecting their first child any day now — is eyeing the Borg-Warner Trophy.

“I’m focused on it. I can’t do more than what I’ve done in the past, I can tell you that,” Newgarden said. “You can go your whole career and not win the Indy 500, and I accept that, if that’s the case. But I’m not going to go down without a fight.”

A win by Newgarden — or McLaughlin or Will Power — would extend Roger Penske's record to 19 as an owner, and happen at his first true Indy 500 as owner of the series and iconic Indianapolis Motor Speedway.

His first Indianapolis 500 after closing the sale was delayed and held in front of empty grandstands for the first time in race history. Last year was a limited crowd, but the 150,000 or so in attendance unofficially reopened America as the largest sporting event at the time.

Now he's expecting a packed house, the return of Carb Day and its traditional concerts and the re-opening of the Snake Pit party zone in the infield.

There will be 33 cars in the field, Penske insisted, although 33 entrants have yet to be announced.

“Look, anything can happen, you know? But what we've got on paper today has us at 33,” Penske told AP, insisting that did not involve him pulling together some kind of entry backed by Team Penske.

“It would have to be an end zone catch or something, we'd certainly fill the field if we had to, but that's not in our plans,” Penske told AP.

Team Penske president Tim Cindric immediately shut down any Penske involvement: “We're not doing that. We don't have any people, they are all doing sports car stuff. I don't know how we would do that.”

The 500 got a boost from a career-best, sixth-place finish in Jimmie Johnson's debut in an IndyCar oval race at Texas Motor Speedway last month. It sparked discussion the seven-time NASCAR champion could be a legitimate contender next month in his Indy debut, but that was overshadowed by a terrible weekend in Long Beach.

Johnson crashed Friday and broke his hand, so he had to compete in a cast. He crashed Saturday and again on Sunday before hustling off to see a specialist in North Carolina.

Before his weekend went off the rails, Johnson indicated he was looking into a third IndyCar season in 2023. The former Hendrick Motorsports driver should be a candidate for the Hendrick and NASCAR collaborative 24 Hours of Le Mans special entry, but told AP he can't make any decisions on driving Le Mans until he sees the 2023 IndyCar schedule.

That is just one one piece of a silly season that ramped up even before the first checkered flag this year.

Alexander Rossi, winner of the 100th running of the Indianapolis 500, is in a contract year with Andretti Autosport and the season is shaping up to be a long goodbye similar to Ryan Hunter-Reay's a year ago.

In March, Michael Andretti told reporters he'd informed Rossi he could sign with another team if a good offer came along. Two disastrous races later (bad team strategy at St. Pete and a mechanical failure at Texas), Andretti told AP that the team has failed Rossi to start the year — but his future at Andretti is still undecided.

In fact, Andretti said, as the two sides evaluate each other, Andretti twice made note that he holds an exclusive window on negotiating a new contract and Rossi isn't even able to talk with any other teams just yet.

“We just need to get a good result and get the year going. That’s the main focus,” Rossi said of his future. “Whatever else comes is life.”

Either way, the entire paddock is aware that rookie Kyle Kirkwood is being stashed at A.J. Foyt Racing and putting up on-track performances worthy of a seat with a bigger team. Andretti developed Kirkwood but didn't have a seat this year for the 23-year-old American. After his 10th-place run at Long Beach, the fight is on for Kirkwood, and Andretti must be thick in the battle.

Andretti, meanwhile, remains frustrated by his bid to land a Formula One team. Still pending is his application to add a two-car Andretti team that would feature California native Colton Herta, who has meanwhile signed a deal to test McLaren's F1 cars.

The intrigue: McLaren says it is evaluating Herta for itself while Andretti says McLaren is helping Herta earn the licensing points he needs to compete in F1. Either way, the push is on to get Herta overseas. Andretti said it will be with him should he get a team, but he wouldn't stop Herta from leaving if McLaren offered him a ride. In 2024, Herta is a free agent and can do anything he wants.

And then comes the curious case of Pato O'Ward, popular breakout star and supposed championship contender. O'Ward dreams of Formula One, the entire world knows, and his pairing with Arrow McLaren SP gives him a path to his ultimate goal.

But the 22-year-old Mexican doesn't like his current contract and began publicly complaining about it before the second race of the season. That created distractions that O'Ward admittedly is struggling to manage. He made mistakes all three race weekends — that includes hitting a crew member on pit road at Texas — but an impressive drive Sunday at Long Beach rallied him to a season-best, fifth-place finish.

It moved O'Ward from 13th to ninth in the IndyCar standings. More important, the swagger he'd shown in last year's breakout season was back again.

“Yeah, man, I know it's not a win,” O'Ward said. “But we've had a very rough start to the year. We will build on the momentum of today.”