Bowyer heads to Kansas Speedway without his typical crowd 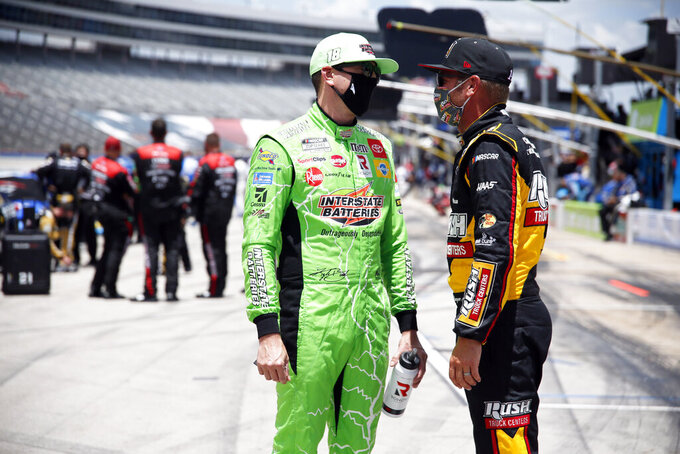 KANSAS CITY, Kan. (AP) — This is typically one of the busiest weeks of the year for Clint Bowyer, who grew up in the small southeast Kansas town of Emporia and began his racing career on the dirt surface of Lakeside Speedway just outside Kansas City.

The NASCAR star is fielding ticket requests for the Cup Series race at Kansas Speedway. He's slipping back to his home town to check on his auto dealerships. He's entertaining sponsors, meeting with friends — among them Chiefs quarterback Patrick Mahomes and tight end Travis Kelce — and trying to squeeze in a Royals game over at Kauffman Stadium.

But there is nothing typical about anything in the age of the coronavirus.

Instead, Bowyer will show up for Thursday night's race with no family crowding into his hauler, no fans in the stands. He will wear a mask along with everyone else in the garage area, and head to the track without practice or qualifying.

“Obviously it's going to be drastically different not having fans,” Bowyer said. "That is what put this sport on the map. That is what has kept it on the map all these years and without that, it is just a void that can't be replaced.

“Are we putting a product on the track? Yes. Are there people at home watching? Yes, the ratings show that and these are the things keeping us relevant,” he continued. “I think the rest of the world is fixing to see first-hand just like we experience in the last few months and the difference and challenges and impact of not having that fan presence there. It isn't just the presence, it is the atmosphere of your event. Without that, it isn't quite the event it could be or should be or would be.”

There have been fans at select NASCAR races since the pandemic began, including the All-Star race at Bristol and last weekend's race at Texas. Tickets are also being sold for New Hampshire and Daytona. But whether fans are in seats is largely left up to local jurisdictions, and with case numbers soaring in Kansas and Missouri, the decision was made earlier this month to leave the nearly 50,000 seats empty for the prime-time, mid-week race.

None of that changes the pressure Bowyer faces at his home track.

He signed a one-year extension with Stewart-Haas Racing for this season and is searching for his first win, which would ensure he races in the postseason for the third straight year and help his job prospects for next season. He hasn't won since Michigan in 2018 and no doubt sees SHR driver Chase Briscoe cleaning up in the Xfinity Series.

In other words, Bowyer's first win in 24 starts at Kansas Speedway could come at no better time.

NASCAR announced this week that it will continue to conduct races without practice or qualifying for the rest of the season in its three national series.

“The current format has worked well in addressing several challenges during our return to racing. Most importantly, we have seen competitive racing week to week," said Scott Miller, the senior vice president for competition. “NASCAR will adjust the starting lineup draw procedure for the playoff races and will announce the new process at a later date.”

The decision wasn't universally welcomed, though, especially when IndyCar and other series have practiced and qualified.

“Not qualifying has been a bummer,” Joe Gibbs Racing driver Erik Jones said, “because I know going to Kansas we could start better than wherever we're going to draw, which is anywhere from 13 on back to 24 or somewhere in there.”

Richard Childress Racing is coming off its first 1-2 finish since 2011 last weekend at Texas, where Austin Dillon and Tyler Reddick held off Joey Logano, Kyle Busch and Kevin Harvick.

“It means a tremendous amount because we’ve struggled, and everyone knows that,” team owner Richard Childress said. “To see both those guys racing for the win. I was hoping they didn’t wreck each other. ”

Defensive tackle Chris Jones of the Super Bowl champion Chiefs will serve as the grand marshal on Thursday night, though he will have to say “start your engines" from afar because of the pandemic. Jones recently signed a four-year contract that could be worth up to $85 million.

“The Chiefs provided our community a great deal of pride and joy last February, and it is only appropriate to have someone who played such a critical role in their success kick off our race weekend,” track president Pat Warren said. “We look forward to one of the NFL’s top defensive players having a role at Kansas Speedway.”