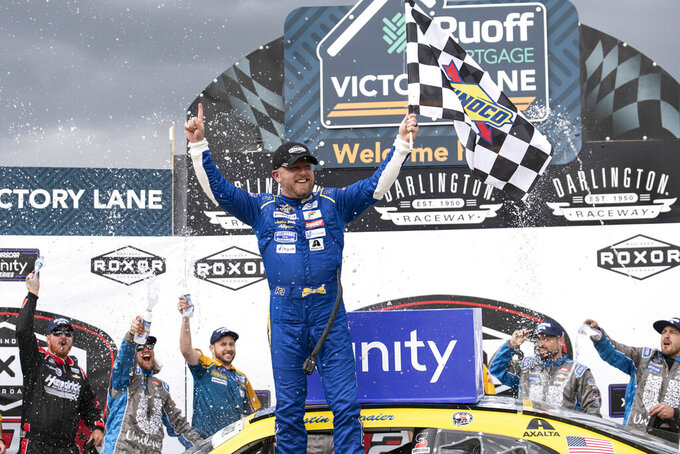 Justin Allgaier (7) celebrates in Victory Lane after winning the NASCAR Xfinity auto race at the Darlington Raceway on Saturday, May 7, 2022, in Darlington, S.C. (AP Photo/Matt Kelley)

Allgaier ended a 34-race winless streak when he passed AJ Allmendinger to start a two-lap sprint following a caution and cruised the final 2.7 miles to give team owner Dale Earnhardt Jr. another victory in NASCAR's second-tier feeder series.

Noah Gragson won two weeks ago at Talladega Superspeedway and Josh Berry won last week at Dover Motor Speedway. Allgaier was a nonfactor at Talladega and a runner-up a week later.

This was a minor breakthrough, even though it was Allgaier's 17th career victory in the Xfinity Series. It was his first one in a year, with the last one also coming at Darlington. He's been in the mix plenty since, just not the first one across the finish line.

Allgaier treated this one like it's been a while, too. He thanked everyone he could think of, grabbed the checkered flag and walked the outside wall while shaking hands and celebrating with fans.

“Got the job done,” said Allgaier, who was forced to start the race from the back of the field. “I'm super pumped. ... We've been doing this way too long. You know how this feels, and this feels great to get back to victory lane. We'll hopefully carry this momentum on for a few more weeks."

Allgaier had little resistance for the win. He lined up outside Allmendinger on the final restart with much newer tires and zipped by the leader as the green flag dropped. No one got near him over the final two laps, either.

Allmendinger and Tyler Reddick looked like they might vie for the win before Reddick blew a tire with six laps remaining, hit the wall and brought out a caution. That essentially made Allmendinger, the only one at the front of the pack on worn tires, a lame duck for the final restart.

Chevrolet took home seven of the top 10 spots, including all three from Kaulig Racing. It was Allmendinger's 11th consecutive top-10 finish for Kaulig.

The series takes a week off before returning at Texas Motor Speedway on May 21.