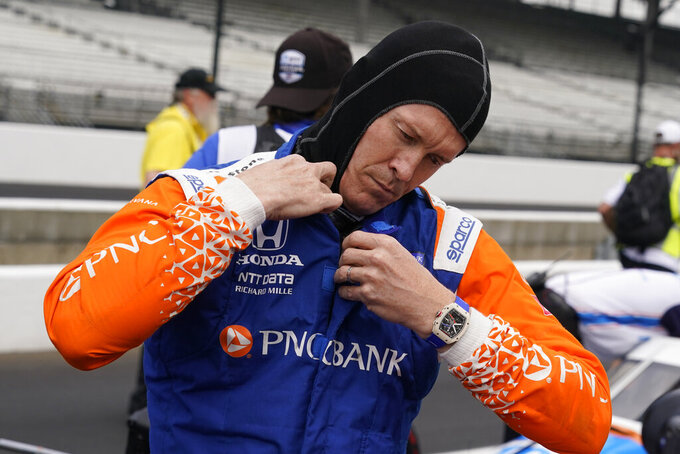 Scott Dixon, of New Zealand, puts on his equipment during qualifications for the Indianapolis 500 auto race at Indianapolis Motor Speedway, Saturday, May 21, 2022, in Indianapolis. (AP Photo/Darron Cummings)

INDIANAPOLIS (AP) — Not much rattles The Iceman at Indianapolis Motor Speedway, not even record speeds.

Scott Dixon smashed the Indianapolis 500 pole-winning record with a breathtaking qualifying run of more than 234 mph. His hands were shaking when he climbed from his car following his first run Sunday, but the New Zealander was unbothered and went back out for an incredible final run.

His four-lap average of 234.046 mph (376.661 kph) around Indianapolis Motor Speedway gave Dixon the fifth Indy 500 pole of his career. He'll lead the field to green next Sunday in “The Greatest Spectacle in Racing.”

“That’s what this place is about, the ups and downs that you have just in one day, it’s crazy,” Dixon said. “I think that’s kind of what we all secretly thrive on, right? To live on that edge is an amazing feeling and when you do nail it, that’s what it’s all about. Days like these are amazing.”

Considered the best driver of his generation, Dixon's average broke Scott Brayton's pole-winning record of 233.718 mph set in 1996. Arie Luyendyk holds the four-lap qualifying record of 236.986 mph, also done in 1996, but not in a run for the pole.

Dixon's qualifying run was the second fastest in 106 runnings of the most prestigious race in the world.

Dixon's first lap was an eye-popping 234.437 mph and drew a roar from the fans. His second lap was 234.162 and wife Emma bent over the pit wall in amazement, her hands covering her mouth. Dixon's drop-off from there was was miniscule: his fourth and final lap was 233.726 as his consistency gave Chip Ganassi Racing its seventh Indy 500 pole.

“The first number does mean a lot, and when I saw 234, it was ‘OK, this is going to be a good run,’” Dixon said. “But you're busy, you're consumed. Gone on the early years of just hitting the apexes and enjoying the speed.”

Ganassi advanced all five of his drivers into the two-round qualifying shootout to determine the starting order for the first three rows for next week's race. Seven-time NASCAR champion Jimmie Johnson needed a massive save in the first turn of his first lap and didn't advance out of the round of 12.

But Dixon did, along with his other three Honda-powered teammates. That made it Dixon, reigning IndyCar champion Alex Palou, Marcus Ericsson and Tony Kanaan in a head-to-head “Fast Six” shootout against Chevrolet-powered teammates Ed Carpenter and Rinus VeeKay.

The 21-year-old VeeKay on Saturday posted the third-fastest qualifying run in track history but didn't have enough for Dixon's big, big laps. Palou, who averaged 233.499, qualified second alongside his teammate and VeeKay was third at 233.385.

Palou, who led 35 laps last year and finished second to Helio Castroneves, said he knew he'd be beaten by his teammate.

“There was not a lot of nerves, I kinda knew he was going to get it,” Palou said. “I was super comfortable and I did everything I had. I kind of wish because Scott already had four poles here, he could have given me one, but he doesn't share much.”

“I'm very proud to be on the front row again, and I haven't qualified worse than fourth in my three qualifying attempts, so I am very proud of that,” VeeKay said.

But the 21-year-old said his best run was on Saturday — “I did what Scott did yesterday” — and he knew quickly that he couldn't beat Dixon for the pole.

“I think we could have put rocket fuel in our engine and I still think not beat Scott,” VeeKay said. “He was not just a fraction faster, he was a lot faster than everyone else.”

Carpenter was fourth and followed by Ericsson and Kanaan, who at 232.372 was the slowest of the final six shootout. But even the slowest cars were flying around Indy, which hasn't seen speeds like these since 1996.

Kanaan's four laps would have been the eighth-fastest qualifying run in the record books written before the drivers rewrote history this weekend. The 32 cars that turned qualifying laps did so at an average of 231.034, making next Sunday’s field the fastest in race history.