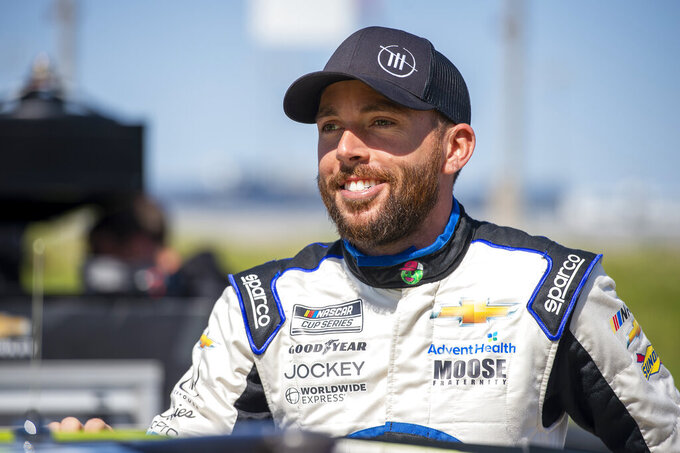 FILE - Ross Chastain smiles before NASCAR Cup Series practice at Dover Motor Speedway, Saturday, April 30, 2022, in Dover, Del. Chastain has proven to be a decent road racer over his career and there's no reason to believe he won't be in the mix Sunday at Road America in Wisconsin. (AP Photo/Jason Minto, FIle)

Ross Chastain has proven to be a decent road racer over his career and there's no reason to believe he won't be in the mix Sunday at Road America in Wisconsin.

But it takes a fine line of patience and aggression to battle for race wins and Chastain has been trying hard to find that balance in his breakout season. Chastain has picked up a pair of Cup victories this season, his first with Trackhouse Racing, but he's rattled some cages among his rivals along the way.

He's admittedly made a series of overaggressive on-track moves that have strained some relationships, but the 29-year-old Chastain is torn on how to proceed. What's he done so far has Chastain both qualified for NASCAR's playoffs and ranked second in the Cup standings.

“All I know is I've chased this dream and this goal of competing in the Cup Series for going on 11 years, 12 years now,” Chastain said. "When I race guys, I want it to be for the win and I want to race them for the win, and I need to not do (big moves) for fifth place. I need to have some better couth about it. I don't know how to fix it, I just know that I want this so bad.

“And that doesn't mean that I just get to run into people, like, I get that. And trying to be better has been a challenge. I just want to pass people. I feel like I'm the aggressive guy, yeah, but I also get run into a lot. And that's fine, that's racing, I love it, and I get to do it at the front of a Cup race, which is just a dream come true.”

Chastain picked up his first career Cup win in March on the Circuit of the Americas road course in Austin, Texas, and he had to tussle with former teammate AJ Allmendinger in the closing laps to seal the win.

He won't be afraid to bump and bang again Sunday when NASCAR makes its second consecutive trip to the idyllic 14-turn track that stretches over 4 miles and is considered among the top permanent road courses in the world. Chastain was seventh at Road America last year and the discipline suits him: Chastain has five top-10 finishes in 14 career road course starts.

He'll be trying to navigate his way into victory lane on Sunday and become the first three-race winner this season — Chastain is one of five drivers with two wins — while also trying to find his proper footing in the garage. He's not a superstar, is unmarried so doesn't hang with the young families, and hasn't been included in any of Denny Hamlin's golfing outings or basketball tournaments.

“I don't live the same life as a lot of them; I don't have a bus here in the bus lot and that's the thing — if I wanted to hang out with them on the weekends, I probably should be over there in the bus lot,” Chastain said. "But that just seems like an egregious expense that I don't care to do. Should I probably give them a call and go out on the lake with them on Mondays? Probably. But I don't like the lake that much.

“So I am probably just going to go to the shop. I've got my crew. I've got my friends. It's a pretty small circle. I'm a bit of a loner. I've got way more friends in the garage than I do on the (starting) grid.”

The Cup Series race has a pair of ringers entered in the field with Kyle Tilley and Joey Hand, a pair of veterans from the NASCAR-owned IMSA sports car series.

Tilley will be making his fourth career Cup start and first of the season. The British driver will be in the No. 78 Live Fast Motorsports Ford. In three starts last season, Tilley was 31st at COTA, 35th at Road America and 30th at Watkins Glen.

Hand, a former Chip Ganassi Racing driver, is in the race as part of his long association with Ford. The Californian will be driving the No. 15 Rick Ware Racing Ford, a car that is fielded mostly by Stewart-Haas Racing.

Road America will be Hand's fourth career start in the series, third this season. His career best finish was 20th at Sonoma in early June.