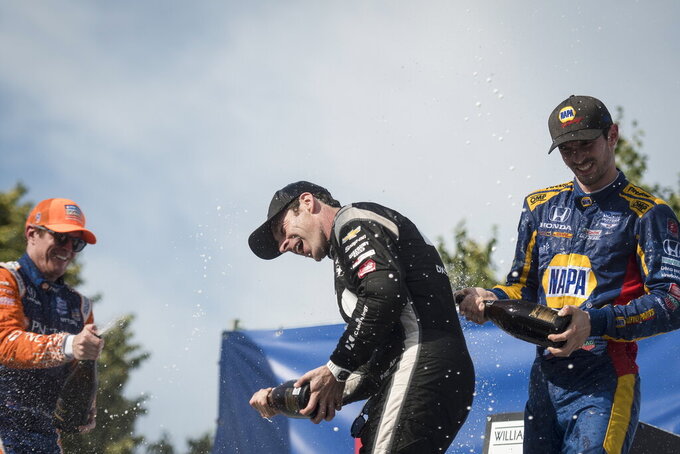 TORONTO (AP) — Simon Pagenaud won his third race of the season and Alexander Rossi tightened the championship race with Josef Newgarden in IndyCar's Sunday race through the streets of Toronto.

The win on the streets around Exhibition Place is the first for Pagenaud this year away from Indianapolis Motor Speedway. The Frenchman won the Indy 500 and the road course race at the speedway to save his job with Team Penske.

Pagenaud had to save fuel in the waning laps to hold off reigning series champion Scott Dixon. But Penske teammate Will Power caused a caution on the final lap and Pagenaud was able to coast to the finish in his Chevrolet.

"I was confident all weekend, I never had a doubt," said Pagenaud, who started from the pole and paced nearly every practice session. "We were only focused on ourselves. I never really looked at who was behind. We were just focused on getting the car where we wanted it to be.

"Those days are the best. There are a lot of bad days in racing, but those sweet days make up for it."

Dixon again indicated he will need offseason surgery on an ailing elbow — he's described the ligament strain as "tennis elbow — and that it bothered him during his drive. The reigning series champion won at Toronto last year, beating Pagenaud.

Rossi finished third, one spot ahead of IndyCar points leader Newgarden. The two began the race separated by just seven points and Rossi cut the deficit to four points.

"We didn't think we had a first-place car really at any point this weekend," Rossi said. "The fact that we were able to put it in the top five was a good thing. Then we thought we had a podium car. That was really about it, unless we had anything come to us in the form of luck. So it was good to just kind of capitalize on what we felt was our maximum today. Obviously finishing in front of Josef Newgarden) was a good thing."

Robert Wickens drove the parade lap in a car equipped with hand controls that allowed the Canadian to drive for the first time since he suffered a spinal cord injury in a crash last August.