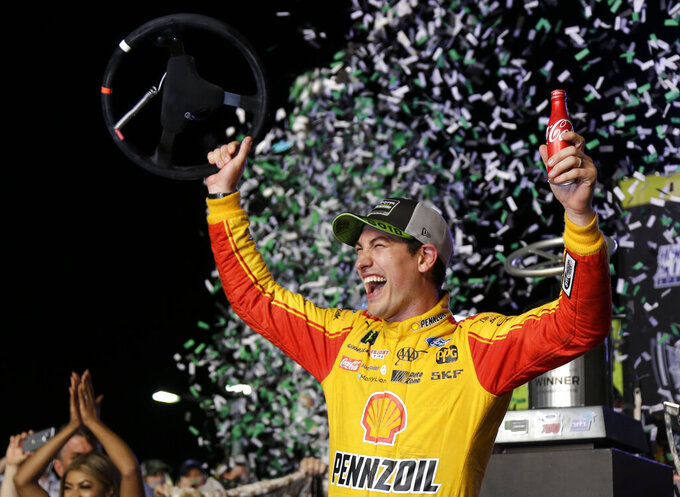 FILE- In this Nov. 18, 2018, file photo Joey Logano waves his steering wheel as confetti flies after winning the NASCAR Cup Series Championship auto race at the Homestead-Miami Speedway in Homestead, Fla. The reset button on NASCAR was triggered as soon as Joey Logano wrapped last year’s championship celebration. There was massive work to be done on stabilizing the stock-car series from a downward spiral speeding toward the bottom and the fix is nothing short of a radical reboot. (AP Photo/Terry Renna, File)

CHARLOTTE, N.C. (AP) — The reset button for NASCAR was triggered as soon as Joey Logano wrapped up last year's championship celebration. There was massive work to be done to stop the stock-car series from a spiral to the bottom and the fix is nothing short of a radical reboot.

The critical change is the introduction of an overhauled rules package designed to make the racing watchable again. And it comes under new leadership at the top.

Jim France replaced his nephew as chairman of NASCAR in August after Brian France took a leave of absence following his arrest for driving while intoxicated and criminal possession of oxycodone. Jim France is now listed as chairman and CEO, has routinely represented the family at NASCAR events and is addressing NASCAR's five-year freefall in nearly all meaningful categories.

The downturn happened during Brian France's reign, and fans essentially exiled him over his extreme changes to the championship format and his detached — often absent — style of leadership.

Jim France has been at every event since taking over and NASCAR at last is showing a sense of urgency in attempting to fix its mess.

"It is a business, but his first love is racing," said Hall of Fame owner Rick Hendrick, who added Jim France and his niece, Lesa France Kennedy, have been accessible to teams and have voiced their commitment to motorsports. "I wish he had stepped out years ago."

France is overseeing the most collaborative atmosphere in NASCAR history. All stakeholders — the sanctioning body, teams, drivers, track operators and television partners — have brainstormed improvements and ideas to stop the plunge in attendance and television ratings. The solution is a new rules package aimed at markedly improving the on-track product.

The new package uses aerodynamic ducts and a tapered spacer to reduce engine horsepower — in simplest turns, it should slow the cars and bunch them closer together to increase passing attempts and improve the overall competitiveness. It will debut in the second race of the season, at Atlanta Motor Speedway.

The old package permitted a handful of teams to move so far ahead of the competition it took too long for anyone to catch them, the racing suffered and fans stopped watching. Kyle Busch, Kevin Harvick and Martin Truex Jr. combined to win 20 of 36 races last season, though the "Big Three" lost to Logano in the championship finale.

The new package is controversial because it is supposed to level the playing field, and elite drivers believe it will diminish the advantage their talent has given them.

An early version of the package was used in last year's All-Star race and fan feedback seemed genuinely enthusiastic until drivers raised enough complaints about it to muddle expectations. Until the rules were tested last week at Las Vegas Motor Speedway, few dared to predict what the racing will look like this season.

NASCAR pushed forward and the new rules are here with major implications. The health of the sport is riding on the belief that, if nothing else, the racing will be better, more drivers will win, more teams will succeed, and fans, of course, will give it a chance.

Making the racing more entertaining is critical in getting fans to pay attention again.

"On the optimism scale of a 1 to 10, I'm a 15," said Marcus Smith, who as CEO of Speedway Motorsports Inc. last year pushed hard for the rules package and also altered his track last season to create the hybrid oval-road course "Roval" that created some buzz during last year's playoffs.

Even so, the spotlight still centers on NASCAR's aging stars, who are adamant they can still win championships.

Leading the veteran charge is seven-time NASCAR champion Jimmie Johnson in a new-look No. 48 team. Johnson and Chad Knaus, the only crew chief he'd had in his Cup career, split at the end of last season and longtime sponsor Lowe's left NASCAR.

Johnson suffered through the first winless season of his career last year but is certain he can still win a record eighth championship.

"There is a lot of 'new' to it, there's no way around that," Johnson said. "It definitely is a new challenge and I welcome it. I'm just excited to get this fresh start and see where it takes us."

Truex, a year removed from his Cup title, moved to Joe Gibbs Racing for 2019 because his title-winning team closed. He replaced Mexican driver Daniel Suarez, the only non-American in the field, and Suarez was signed last month by Stewart-Haas Racing.

Kurt Busch vacated that seat and replaced Jamie McMurray at Chip Ganassi Racing, and McMurray's career will come to a close after the Daytona 500. He and AJ Allmendinger are among the many drivers moving into television work, opening opportunities for lesser-known drivers.

Logano, who used two victories in the last four races of 2018 to become the unlikely champion, is a firm believer that NASCAR is making moves to stop its downturn.

"Our sport is not in the dumps, that's not the case at all," Logano said. "I think there's a lot of upside, a lot of great things we are doing, and when it comes to motorsports in America there is none better than NASCAR."