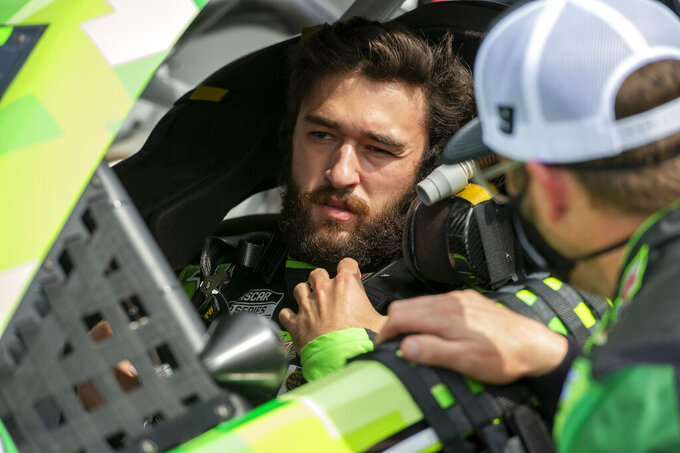 FILE- In this Aug. 22, 2020, file photo, Chase Elliott (9) sits in his car during a NASCAR Cup Series auto race at Dover International Speedway in Dover, Del. Denny Hamlin will be racing for the Cup against Team Penske drivers Joey Logano and Brad Keselowski, as well as Chase Elliott of Hendrick Motorsports. (AP Photo/Jason Minto, File)

AVONDALE, Ariz. (AP) — NASCAR will take the checkered flag on its season, one of the longest in professional sports, celebrating its ability to work through the pandemic and close its year.

The season was suspended March 13 after just four of 36 races had been completed. The shutdown lasted 10 weeks, a hectic time in which the industry wasn't sure it could survive.

Nobody makes any money unless NASCAR runs its races and the sport was desperate to get back to work. NASCAR was one of the first sports to resume in May, one of the first to get fans back at its events, and used a crammed and overhauled schedule of doubleheaders and midweek races to get to Sunday's season finale.

When the Cup champion is crowned at Phoenix Raceway, all three of NASCAR's national series will have completed their full season.

“I would suggest this is the single most difficult year that we’ve faced as a sport,” NASCAR President Steve Phelps said Saturday in the annual state of the sport — held for the first time over Zoom.

“What we have done during this global pandemic is I think nothing short of remarkable,” Phelps added. "I believe we’re stronger as a sport today than we were pre-COVID. We showed this year as a sport that we did as good or a better job than any sport did, frankly, getting back early and often.

“As of now, as of tomorrow, we’re the only major sport that finished a full season. Certainly proud of that.”

Phelps spent almost a full hour addressing how NASCAR handled the pandemic, the direction the sport is headed and Kevin Harvick's stunning failure to advance to Sunday's championship race.

NASCAR in 2014 introduced elimination rounds in the playoffs and a winner-take-all finale that Harvick won in that debut season. He seemed certain to be headed back to the final four after winning nine races and the regular season title, but he was eliminated last week after a mediocre third round of the playoffs.

Phelps noted the system was designed to create excitement and the best team doesn't always win.

“I think this system, how the playoff system worked... gave fans what they wanted, which was intense drama and really this just amazing competition,” Phelps said.

NASCAR is scheduled to open the 2021 season with the Daytona 500 in Florida and Phelps believes spectators will be permitted. NASCAR prides itself on its accessibility and is working on plans to get fans back into the infields and perhaps re-opening the garage beyond essential personnel.

NASCAR does not know if the the NFL schedule will go longer than expected, and there's a chance the Super Bowl could be played in Tampa on the same day the Daytona 500 runs just two hours away.

“I don’t want to speculate what would happen with the 500 if the NFL were to put the Super Bowl on February 14th. We’ll react to that at that particular time,” Phelps said.

NASCAR's new car has been delayed a year until 2022 and the launch is expected to dramatically create a more favorable business model for team owners.

That's created an incredible market for charters, the paperwork owners hold to guarantee a slot in the field each week and a cut of the overall purse. Only 36 charters exist for a 40-car field and bidding was intense all summer as Denny Hamlin and Justin Marks were among at least a half-dozen people trying to start new teams.

Phelps said the charter agreement limits NASCAR to the original 36 sold with expansion only permitted if a new manufacturer enters the sport.

NASCAR in June banned the display of the Confederate Flag at its events behind the urging of Black driver Bubba Wallace. The move was polarizing for a portion of the fanbase that has long embraced NASCAR's southern roots.

A plane has pulled a Confederate Flag banner over several race tracks since the ban and at Talladega Superspeedway in Alabama some fans paraded past the front entrance waving the flags.

Many fans have claimed they've stopped watching NASCAR because the sport got involved in social issues — Wallace also drove a car with a Black Lives Matter paint scheme this season — but Phelps said NASCAR's mission is to create an inclusive environment.