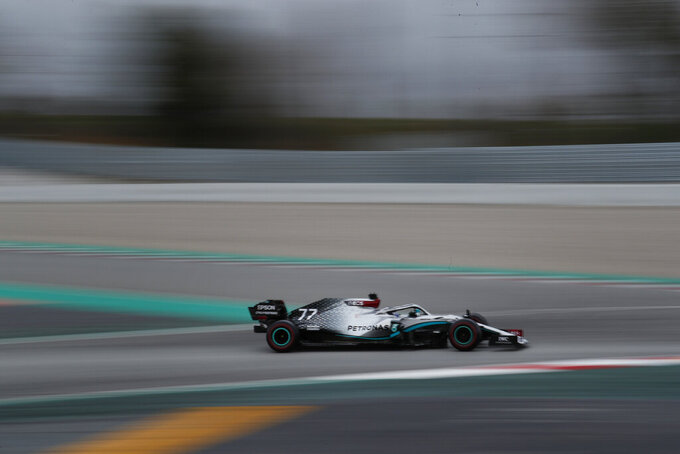 MONTMELÓ, Spain (AP) — Valtteri Bottas set the fastest lap time on the final day of Formula One testing on Friday, as Mercedes maintained its status of title favorite heading toward the new season.

Red Bull's Max Verstappen and Renault's Daniel Ricciardo were right behind the Finnish driver within one tenth of a second on the Barcelona-Catalunya Circuit.

Last week, Bottas recorded the fastest time of any driver in the six-day preseason.

Charles Leclerc of Ferrari and defending champion Lewis Hamilton put in the fourth and fifth best times, respectively, on Friday.

Leclerc was the busiest driver with 177 laps completed while teammate Sebastian Vettel rested.

Ferrari team principal Mattia Binotto had to acknowledge that Mercedes looked to be way ahead.

“I said I was not optimistic as I was last year, and I think I can confirm it,” Binotto said. “We are certainly not the fastest car in testing.”

Last year at this time, Ferrari had high hopes after setting faster lap times than Mercedes in testing, only for the pair of Hamilton and Bottas to blow them away once the racing began.

The final day of the tests went smoothly for most drivers with no major incidents or red flags.

Alex Albon of Red Bull and Kimi Raikkonen of Alfa Romeo spun off the track in the morning half of the session, but both were able to get back going.

Mercedes fixed the oil pressure problem that brought Hamilton’s car to a stop on Thursday, limiting the six-time champion to just 14 laps. On Friday he put in 90 error-free laps before handing it over to Bottas.

The absence of major changes to the rules for this season appears to give an even bigger advantage to Mercedes, which can just improve on its already dominant car from 2019.

Still, Hamilton said that reliability may be their weak spot.

“We're on our third engine already, so it's definitely not an easy or relaxed scenario for us,” Hamilton said. “The engine is actually very good, and an improvement from last year. It's just not quite where we want it to be reliability-wise.