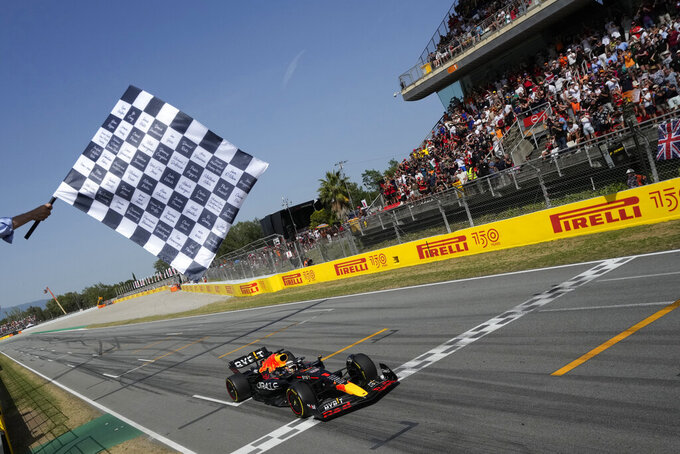 Red Bull driver Max Verstappen of the Netherlands receives the checkered flag as he crosses the finish line to win the Spanish Formula One Grand Prix at the Barcelona Catalunya racetrack in Montmelo, Spain, Sunday, May 22, 2022. (AP Photo/Pool/Manu Fernandez)

MONACO (AP) — Charles Leclerc has a problem to solve this weekend at his home track.

After losing the Formula One championship lead last week, Leclerc is determined to claim it back from world champion Max Verstappen at the Monaco Grand Prix on Sunday.

The problem? Leclerc has never finished an F1 race on the famed street circuit in the tiny Principality.

That's even more frustrating given that he grew up in an apartment overlooking the circuit and actually learned to swim on part of it.

“It’s not been the luckiest track for me overall, but it’s part of motorsport and sometimes things just don’t go your way. Hopefully this year they will,” Leclerc told reporters on Thursday. “I love it here and obviously it's a very special event for me, having grown up here, and these roads I know so well."

Leclerc has a unique bond with the street circuit, which passes by a swimming pool.

“My favorite part of the track is definitely the Piscine, which is the corner combination of two esses by the swimming pool,” he said. “It just feels amazing, I really enjoy driving there. It’s also where I learned how to swim as a child, so I have an emotional attachment to it, making it even more meaningful.”

He was in pole position when he crashed his Ferrari on his final timed lap in qualifying, with Verstappen pressuring his leading time. The team worked hard to fix his car overnight but he pulled out just before the start of the race with a gearbox problem.

The crash moved Verstappen up to pole, and he won to claim the lead from Lewis Hamilton and top the leaderboard for the first time in his career.

Leclerc first raced here for Sauber in 2018, crashing into the back of another car late in the race. Then in his first season with Ferrari in 2019, Leclerc retired early because of damage to the car’s floor. All engines were off in 2020 when the race was canceled due to the coronavirus pandemic.

Leclerc has four F1 wins among his 17 podium finishes and desperately wants to add Monaco to the list. The late Ayrton Senna experienced difficulties at his home Grand Prix in Brazil, winning it only at the eighth attempt.

“I'd like to win (here) as soon as possible," Leclerc said. "Ayrton was my idol and I've often seen his on-board (cameras) here in Monaco, which were super impressive.”

Leclerc’s retirement last Sunday in Spain due to engine failure, when he was coasting in front for Ferrari, allowed Verstappen a win and moved the Red Bull driver six points ahead — having trailed Leclerc by 46 points after just three races.

But a 52-point swing has turned momentum Verstappen's way.

“Of course when you look at it, losing 52 points isn't great. But once again, what I look at in the difficult moments was that the performance was there," Leclerc said. "We'd got on top of things more with the tires and in qualifying. The championship is still long, and I'm sure we'll have our chances to make up for it.”

Verstappen's already up to 24 career wins at the age of 24. By comparison, seven-time F1 champion Lewis Hamilton's 24th win came when he was 29.

Verstappen's hitting a groove and the Dutch driver has four wins from his four finishes, having retired the Red Bull car twice in the first three races. Leclerc has won the other two races this season, and Spain was his first retirement.

Leclerc is confident it was a blip.

“I think the team knows where it’s coming from so this gives me the confidence it won’t happen again,” he said. “I know the performance is in the car for us to do a great result this weekend.”

Leclerc leads with four pole positions this year, to Verstappen's one, highlighting his one-lap speed. It was a different story last year, when Leclerc took an unexpected pole for Ferrari when the car was not as fast. Then came that crash.

“Last year’s incident was just trying to push too much and I clipped the inside wheel," Leclerc said. “There’s no track that comes close to the adrenalin we get in Monaco. For me it’s part of F1’s history."

For Hamilton, meanwhile, the wait goes on.

The veteran British driver is seven races without a victory since winning the penultimate race of last season at the Saudi Arabian GP. He has one podium for the struggling Mercedes and is sixth overall, 64 points behind Verstappen and 28 points behind his teammate George Russell, who is fourth.

Leclerc tips Mercedes to bounce back.

“There’s no question for me that they will be back very soon,” he said. “I hope they can join us to fight for wins because it should be exciting for Formula One to have a three-team battle, and to have George and Lewis also fighting for wins.”