Larson grateful for 2nd chance in NASCAR after racial slur 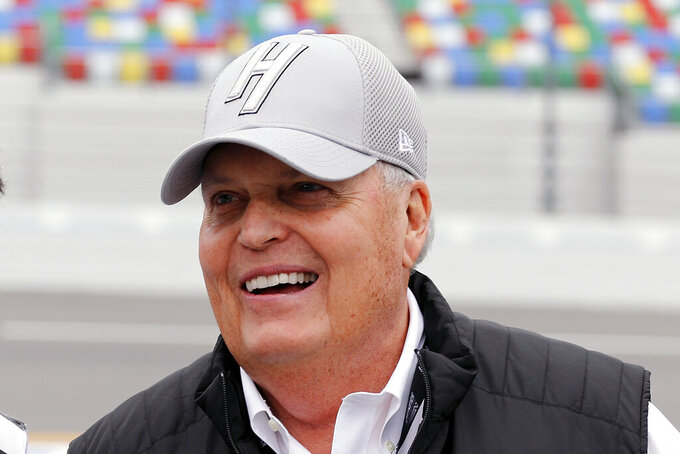 FILE - In this Feb. 10, 2019, file photo, team owner Rick Hendrick laughs on pit road during qualifying for the Daytona 500 auto race at Daytona International Speedway, in Daytona Beach, Fla. Kyle Larson was banished from NASCAR for all but the first month of his last season, his punishment for using a racial slur while racing online. Rick Hendrick felt the driver paid his penalty and deserved a second chance, one that begins with the season-opening Daytona 500. (AP Photo/Terry Renna, File)

DAYTONA BEACH, Fla. (AP) — Kyle Larson loaded his motorhome and drove to Daytona International Speedway by himself, alone for some seven hours to prepare for his return to NASCAR competition.

The excitement of a new season settled his nerves and he felt optimistic about his future.

After serving a six-month suspension for his use of a racial slur that nearly cost him his career, Larson was just appreciative of the opportunity ahead.

“I feel extremely grateful because, you know, I really never thought I would get another chance to race in NASCAR and I kind of accepted that,” Larson said Monday as he waited for the Daytona infield to open.

“I hope to do a good job on and off the track and really take advantage of a second chance.”

Larson's career imploded early in the pandemic during a night of virtual racing. He used the N-word to address his spotter over the livestream and it was heard by everyone following online.

The clip quickly spread and the fallout was swift: Larson was dropped by nearly every sponsor and fired by Chip Ganassi Racing within a day. He'd been headed into free agency, poised to sign the most lucrative contract of his life, and suddenly found himself unemployable at 27 years old.

He began a path to redemption that went far beyond the sensitivity course NASCAR ordered him to take during his suspension. Larson took it upon himself without publicizing his actions to pursue a hands-on education in racial inequality and injustice.

Larson volunteered with a Minneapolis foundation focused on youth development and empowerment, visited with former Olympian Jackie Joyner-Kersee and resumed work with a Philadelphia nonprofit that helps minorities advance in motorsports. Although he's half-Japanese and advanced through NASCAR's diversity program, Larson had his eyes opened to his childhood of privilege coming from a middle-class, two-parent household.

NASCAR reinstated Larson late last year and he found a soft landing with Hendrick Motorsports, one of the top teams in motorsports. Rick Hendrick wanted to offer Larson that second chance and his support has been unwavering — he's willing to fund the No. 5 Chevrolet out of pocket if needed and the sponsor for Sunday's season-opening Daytona 500 is a Hendrick automotive company.

Larson spent most of 2020 rebuilding his image and is ready to prove his character in and out of a race car.

“A lot of people do things and they just say ‘I’m sorry' and go right on running their life. And that’s all they have to do and people say ‘OK, we’ll give you another shot,'" Hendrick said. "This guy did 10 times that. He’s created an image and (done) things in that community that people really respect.

"It was Kyle’s heart and Kyle’s desire that got him back.”

Hendrick is confident that sponsorship of Larson will develop once Larson is back on track. The team so far has signed two sponsors to cover four of this year’s 36 Cup races and Larson spoke to executives with both companies to close the deals.

Once he gets in Hendrick equipment, though, Larson is expected to be a title contender. He won only six times in 223 races driving for Ganassi but Hendrick is at a different level. Chase Elliott last year gave Hendrick its record-extending 13th Cup title and the organization opens 2021 only six wins away from Richard Petty Motorsports' all-time mark of 273 victories.

Hendrick doesn't worry about the reception Larson might receive in the grandstands or the garage — “fans love him, he drives the wheels off the cars,” he said — and he believes Larson returns to NASCAR with emotional depth.

Larson made amends with fellow driver Bubba Wallace, NASCAR's only Black full-time driver. Wallace has been at the front of NASCAR's inclusion efforts and successfully pushed the sport to ban the Confederate flag at its tracks.

When asked about his relationship with Wallace, Larson chuckled and said the two had been texting earlier Monday about gaming consoles and golf. Like Larson, Wallace has moved into better cars in 2021, and Larson believes they each have platforms to help NASCAR's diversity push.

“Everything is fine with Bubba and I, and I’m excited to get on track with him,” Larson said. "We’re each in really good equipment and I’m sure we’ll be battling each other a lot. I think the two of us look forward to leading NASCAR in this transformation.”