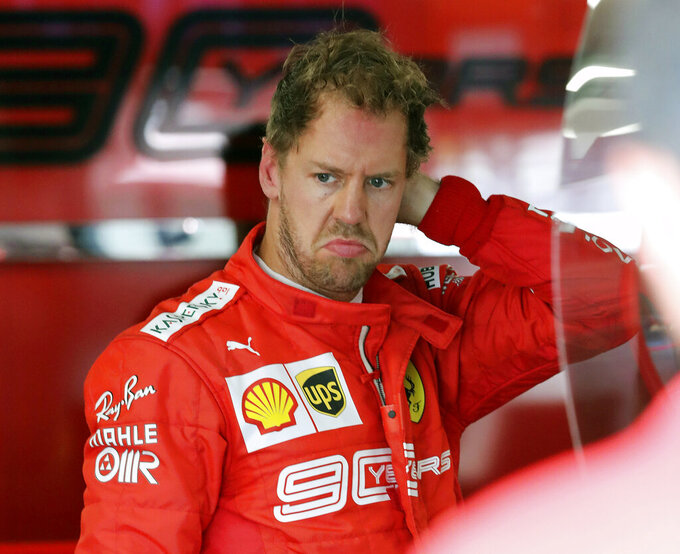 Ferrari is looking for its first victory of the season after six races, all won by Lewis Hamilton or Valtteri Bottas of Mercedes.

"It has been a positive day," said Leclerc, the first-year Ferrari driver. "The steps we took from FP1 (free practice) to FP2 have been very good. Now we need to do the same into qualifying. The car felt better but we need another step to challenge Mercedes tomorrow. I still believe that Mercedes is quicker than us. Today doesn't give the full picture."

Leclerc, the Monaco driver who was forced to retire from his hometown race two weeks ago, led the way in the afternoon practice at 1 minute, 12.177 seconds while his German teammate was second at 1:12.251.

Finnish driver Bottas was not far behind, posting the third-best time of 1:12.311.

"At the moment I think we still need to improve a little bit," said Vettel, the defending Canadian GP champion. "But it's not like something dramatic or anything, just fine tuning."

Five-time world champion Hamilton was leading when he punctured his right rear tire. The British driver rode the curb on turn eight, slid across the track and crashed into the wall. Hamilton apologized for the mistake on the team radio. Mercedes had the fastest lap times in the early practice session, led by Hamilton at 1:12.767.

"If you are quick in the straights, you will struggle a bit more in the corners," said Leclerc. "At the moment, that's our compromise. That's how we work the best. We'll see tomorrow if that's enough."

McLaren's Carlos Sainz of Spain was fourth in the afternoon session at 1:12.553 while Haas driver Kevin Magnussen of Denmark was fifth in 1:12.935, just ahead of Hamilton.

The Red Bulls of Pierre Gasly and Max Verstappen had a disappointing afternoon. They finished 12th and 13th, respectively. Verstappen was fourth earlier in the day.

A third practice session is on Saturday followed by qualifying. The race is on Sunday.