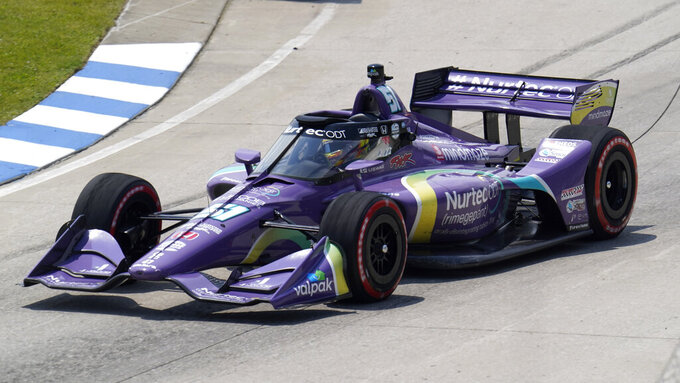 ELKHART LAKE, Wis. (AP) — Romain Grosjean paced IndyCar's opening practice at Road America and immediately wished he was not at the top of the board.

“I don’t like topping free practice,” the Frenchman said after Friday's session.

Grosjean went 1 minute, 47.6781 seconds in his Dale Coyne Racing with RWR Honda on the 14-turn, 4.014-mile road course, where he tested two weeks ago. The former Formula One driver must now try to maintain the pace through Sunday's race.

Ryan Hunter-Reay was second fastest in practice and followed by Josef Newgarden.

IndyCar has another practice scheduled Saturday ahead of qualifying and the three fastest drivers in the first session all lobbied for IndyCar to return to a more traditional schedule. The series this year has eliminated Friday morning practices in a cost-saving measure.

“What is a normal schedule?” asked rookie Grosjean.

Hunter-Reay explained to him that IndyCar up until this season held two Friday practices, one Saturday morning practice and then qualifying — the same format used in F1.

“The teams apparently are saving money on doing the shortened schedule because it’s one less day in hotels, things like that. There’s a bigger subject on the economics of the whole thing,” Hunter-Reay said. “As for a racing driver and fans, it would be better to have the Friday, Saturday, Sunday back again.”

Newgarden said all of his Team Penske teammates want the old schedule back. The four Penske drivers are winless through the first eight races of the season.

Kevin Magnussen, meanwhile, turned his first laps in an Indy car in the practice session as the replacement driver for Felix Rosenqvist, who was injured in a crash last week at Detroit. He was Grosjean's teammate at Haas in F1 until both were dumped at the end of last season and the Danish driver has since looked for work in the United States.

His full-time job is driving the IMSA sports car for Chip Ganassi Racing, but the team gave him permission to race for Arrow McLaren SP this weekend. Magnussen's father, Jan, subbed for an injured Emerson Fittipaldi 25 years ago at Road America and is an F1 veteran and sports car standout who made 11 starts when IndyCar was called CART.

“It’s never been a secret that IndyCar is something that I am pretty passionate about,” Magnussen said. “It’s nothing new. My dad raced Indy cars in the mid-90s when I was only a small little kid, and I can remember back then that I was thinking, ‘I’ve got to do that one day.’”

He's joined in the field this weekend by Cody Shane Ware, who races mostly in NASCAR this year and will make his debut as Grosjean's teammate. Ware was 22nd on the speed chart, sandwiched between seven-time NASCAR champion Jimmie Johnson and Magnussen.

Oliver Askew also returned to the field for the second consecutive race as a substitute. He filled in for Rosenqvist at Detroit but was grabbed by Ed Carpenter Racing for this weekend after Rinus VeeKay broke his collarbone when he fell off his bike during a training ride.

Askew was ninth fastest in Friday practice and said returning to a car — he was let go at the end of last season by Arrow McLaren and has no ride this year — “was just like riding a bike, right?” He was immediately mortified and insisted he wasn't making fun of VeeKay, his former rival in the Road to Indy ladder system.

VeeKay, who fist-bumped Askew after the practice session, took the pun in stride.

“I’ll tell you, riding a bike isn’t that easy,” he wrote to Askew on social media.