Gragson breaks through with Phoenix win in dominant showing 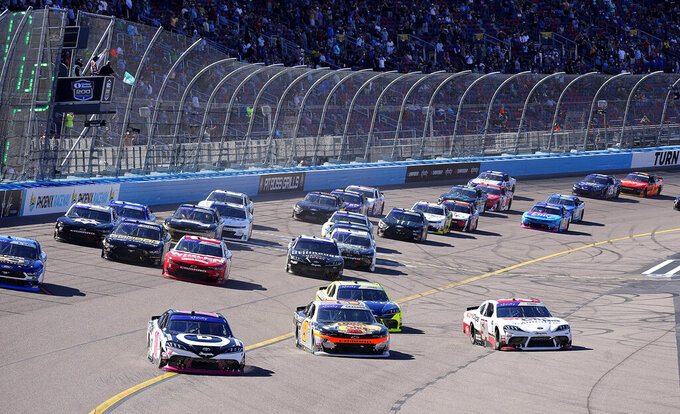 AVONDALE, Ariz. (AP) — Noah Gragson shook off some frustrating finishes over the past few weeks to race to his first victory of the season Saturday in a dominant performance in the Xfinity Series at Phoenix Raceway.

Gragson passed Brandon Jones with 14 laps left and pulled away for his sixth career Xfinity victory. The 23-year-old has had a fast car all year, finishing third at Daytona and second at both Fontana and Las Vegas before breaking through for the victory.

“This team's been on a roll so far this year,” Gragson said. “All top-three finishes in the first four races. I can't thank everyone enough for their hard work and we'll try to keep it going.”

There wasn't much drama in this race with Gragson running far up front for the clean win. He led 114 of the 200 laps and his JR Motorsports Chevrolet was obviously the fastest car in the field. The only time he trailed during the last half of the race was when he had to make a green-flag pit stop with 32 laps to go.

Jones had easily his best race of the season by finishing second. Josh Berry was third, Trevor Bayne was fourth and John Hunter Nemechek finished fifth.

“This is exactly what the 19 team needed to turn the season around,” Jones said.

Gragson celebrated his victory with a burnout in front of pit road, shredding his back tires in the process. He and his team continued the celebration by warming their hands over a hunk of burning tire on the track.

Ty Gibbs — who won last week in Las Vegas — started in Row 2 but was shuffled to the back of the field after spinning out following contact with Berry. He rallied to finish sixth. Toyota cars earned four of the top six spots.

Justin Allgaier started 36th but charged up to third place by midway through the race. The two-time winner in Phoenix settled for a 10th-place finish.

Bayne was the pole-sitter but had a pre-race scare when he couldn't get his car off pit road because of a steering wheel issue. His team frantically fixed the issue before the green flag dropped and the 31-year-old was allowed to stay in the top position because NASCAR determined the steering wheel switch was a safety issue.

Bayne's Toyota won the first stage after beating Gragson back to the finish line by 0.06 seconds. Gragson recovered to easily win the second stage, foreshadowing his dominance down the stretch.

Only 10 cars finished on the lead lap. There were no cautions in the final 100 laps of the race.