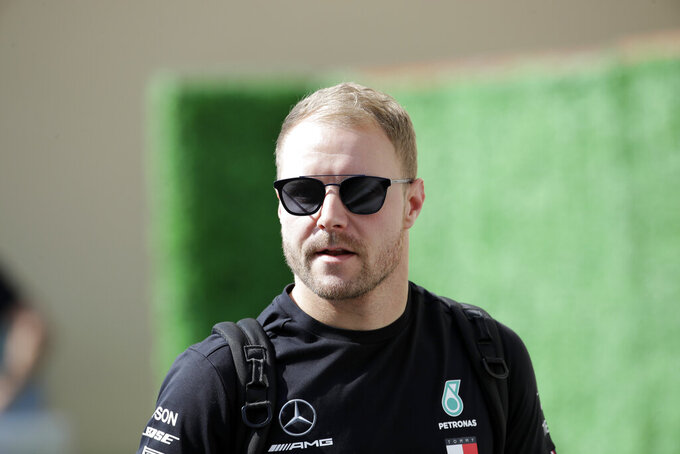 ABU DHABI, United Arab Emirates (AP) — Charles Leclerc pledges to behave better at the Abu Dhabi Grand Prix this weekend, vowing there will be no repeat of the crash which sent both Ferraris spinning out of the last race.

Leclerc wants to end an impressive first season with Ferrari on a high in the last race, but knows he simply can’t chase a victory at all costs given what happened two weeks ago at the Brazilian GP.

He made a stunningly bold but clean move to overtake on the inside of Ferrari teammate Sebastian Vettel nearing the end of the race at Interlagos. The veteran German driver, perhaps feeling usurped by his far younger teammate, then moved back across Leclerc as he sought to regain position through a narrow gap down the right.

They collided fighting for only fourth place, and ended up scoring no points in an embarrassing outcome for the proud Italian manufacturer which has once again finished considerably behind Mercedes in the Formula One drivers’ and constructors’ championships.

Matters have not been helped by the track tussle between Vettel and Leclerc for supremacy within Ferrari.

“We should try to be a little bit less aggressive with each other. It’s not good for the team,” Leclerc said on Thursday at the Abu Dhabi GP. “The consequences were huge in the last race (even though) the contact was very small. I’m pretty sure it won’t happen again.”

Leclerc has impressed with seven pole positions — including four straight — and two wins compared to Vettel’s one win and two poles.

It has raised issues as to who should be Ferarri’s No. 1 driver: Rising star Leclerc or four-time world champion Vettel.

He is vastly more experienced yet, at times, has been beaten for pure speed by Leclerc, who was fast-tracked into the Ferrari hot seat after just one season in F1 with Sauber.

The hierarchy remains unclear and tension has spilled over on a few occasions. The drivers had talks to clear the air following the incident in São Paulo, and team principal Mattia Binotto said both understood the crash was “not acceptable.”

“Seb and I are very competitive, but we need to find the right compromise. Give a little more space for these things not to happen again. We try to understand our situation,” Leclerc said. “Seb probably shouldn't have gone to the left and he knows it, and I could have done a better job of avoiding him. What is important is everything is clear now and we move forward.”

Leclerc is keen to learn from the setback.

Mercedes also had a disappointing time in Brazil, however, with neither world champion Lewis Hamilton or Valtteri Bottas getting on the podium — a rarity for the all-conquering German manufacturer which has secured a record sixth straight driver-constructor double.

Hamilton finished third but was demoted to seventh spot following a time penalty for causing Red Bull’s Alexander Albon to spin near the end. It was only the fourth time in 20 races Hamilton has been off the podium, in a season where he clinched a sixth world title with 10 wins.

“Brazil was definitely not a great one,” Hamilton said on Thursday. “I don’t want another weekend like that, so I’ll put things right this weekend.”

Bottas’ race was ended by an oil leak. The Finnish driver, who has won a career best four races this year, will start on Sunday from the back because of a grid penalty since the leak caused him to require a new engine.

Bottas attended his media briefing at the Mercedes motorhome, having earlier posted a message on Twitter announcing his divorce from wife Emilia (née Pikkarainen), a Finnish swimmer who competed at the past three Olympic Games. They were married three years ago.

“Our ways have split because of the challenges my career and life situation bring, and we think this is the best for us and our future lives, so we are separating as friends,” Bottas wrote on Twitter. “I will be forever thankful for all the sacrifices she had to make for me.”

“You’re just away for crazy amounts of time,” he said. “That’s probably an additional weight load that makes it really, really tough to hold down good relationships.”