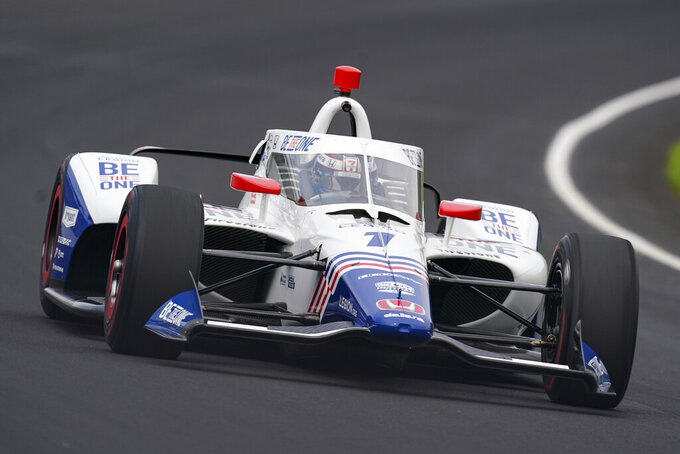 Tony Kanaan, of Brazil, drives through the first turn during qualifications for the Indianapolis 500 auto race at Indianapolis Motor Speedway in Indianapolis, Saturday, May 21, 2022. (AP Photo/Michael Conroy)

INDIANAPOLIS (AP) — IndyCar this month is working to decrease the stigma around mental health conversations, both in the racing community and beyond. The series started by gathering a group of drivers for a wide-ranging conversation about their own mental health and ways they’ve worked to deal with the stresses they’ve faced as professional drivers.

Tony Kanaan on Sunday will make his 21st start in the Indianapolis 500, the most of any driver in the field. He won the race in 2013 in his 12th attempt. The Brazilian will be driving the No. 1 Chip Ganassi car in honor of the “Be The One” campaign, which encourages Americans to provide emotional support to veterans returning from active duty.

Below is an essay Kanaan wrote for The Associated Press on mental health:

In racing, numbers swirl around at about the same rate as stock prices on Wall Street. But when the green flag is waved, there’s only one number that truly matters, and it’s just that: the number one, or um, if we’re racing in my native Brazil. The goal is clear: finish first, pop the champagne and point your index finger to the sky atop the podium.

Our Chip Ganassi Racing team keeps a constant focus on each minor detail so we can enjoy these blissful moments after the final lap. It is quite difficult to describe the feeling of driving the car to victory lane, with your family and teammates waiting to celebrate. But those moments don’t come by chance, and they certainly don’t come as often as I would like.

And that’s OK. I’ve learned to appreciate them.

After flirting with victory in my first 12 starts in “The Greatest Spectacle in Racing,” I broke through and kissed the bricks in 2013 at the Indianapolis 500. But while the hundreds of thousands of fans cheered me on in that moment, I wasn’t thinking about the lead changes, our lap times or our fuel mileage. I was thinking about my loved ones and all the peaks and valleys that went along with my journey.

Professional athletes are often held to higher standards and praised for their strength – but what’s not shown on camera are the personal moments of adversity. Even after I accomplished my life’s mission, I faced the question of, “What now?” It’s no secret that life does continue, and those personal and professional peaks and valleys continue, too. I’ve learned to lean on my wife, Lauren, as someone who I can be open with and who can understand what I am going through.

I’m reminded of these realities during the most important month in racing, which coincides with Mental Health Awareness Month. I’ll have the honor of driving the No. 1 car this Memorial Day weekend under the banner of The American Legion. Working with them, I’ve met countless veterans from across the nation, and I can’t help but pick up on parallels with their stories.

While my personal adversities absolutely pale in comparison to these resilient men and women, I see the challenges they face and empathize with what they’re going through. They’ve returned home after accomplishing their own missions, asking “What’s next?” This really hit home for me when I learned of the harsh reality that an average of 17 veterans take their lives each day. This absolutely must change.

I am proud to say that we kicked off the “Be The One” campaign with the unveiling of my car earlier this year alongside Indiana Gov. Eric Holcomb. This initiative’s goal is to change the conversation from how many we lose to how many we can save. If you could do one thing today to save one veteran, would you? Members of our military, past and present, are our heroes. They are expected to be strong, which makes it difficult for them to ask for help. But let’s change that and be proactive ourselves. Let’s be the one to reach out. Be the one to let them know it is OK to ask for help. We can’t ignore this matter anymore.

What I believe is a certainty is that no one’s personal journey comes easy. No matter your situation, life will bring difficulty and moments of reflection. But what we can control and learn to appreciate is asking others for support.

Jim Cornelison will soon belt out “Back Home Again in Indiana,” and I’ll again look out on the inconceivable number of fans in attendance at the Indianapolis 500. I’ll do so knowing I am just one individual reflecting on their own journey, but I am not alone.

So, let’s all remember to take that deep breath on this race weekend and reflect on the journey that got us to this exact moment. And no matter what happens after the checkered flag is waved and the commotion fades, remember to respect each individual journey, check in with those in your life and spread the word that it is OK to ask for help.