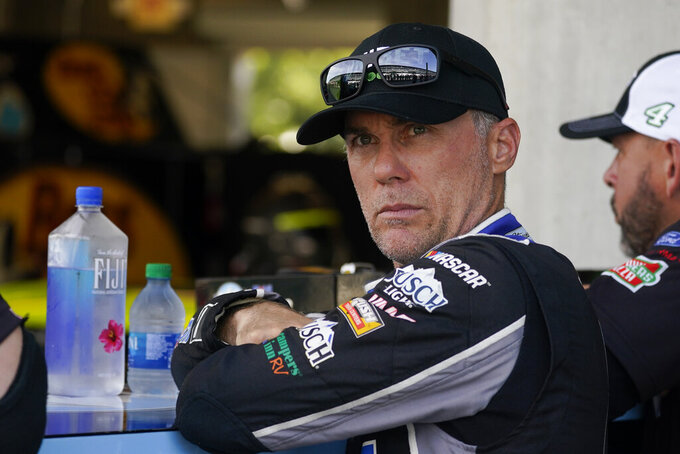 FILE - In this Saturday, Aug. 14, 2021, file photo, Kevin Harvick waits in his garage before practice for a NASCAR Cup Series auto race at Indianapolis Motor Speedway, in Indianapolis. Chase Elliott, according to Harvick, doesn't race very smart. In fact, moving forward in NASCAR's playoffs, Harvick plans to run all over the reigning Cup champion. Those were the angry words Harvick had for Elliott after the race at Bristol Motor Speedway, Saturday, Sept. 18, where a feud no one saw coming took center stage. (AP Photo/Darron Cummings, File)

Those were the angry words Harvick had for Elliott after Saturday night's race at Bristol Motor Speedway, where a feud no one saw coming took center stage.

Elliott is NASCAR's most popular driver and the defending Cup champion doesn't really make waves on the racetrack. He's had his arguments with rival drivers before, but the 25-year-old entered new territory when he decided at Bristol that he'd had enough of Harvick's perceived bullying.

Harvick has never backed down from anyone, on or off the track, and his early career was marked by explosive confrontations that occasionally became physical. Because he is known as a master manipulator who can mentally derail the toughest competitors, most drivers make a genuine attempt not to land in Harvick's crosshairs.

But when an aggressive sequence for the lead — and probably the race win — resulted in a flat tire for Elliott, he made sure to exact his revenge. If Elliott wasn't going to win the playoff race, then Harvick wasn't going to victory lane either.

“I don’t care who he is or how long he’s been doing it, I’m going to stand up for myself and my team and we’re going down the road," Elliott fumed.

To ruin Harvick's race, as well as Harvick's bid to end a yearlong losing streak, Elliott returned to the track after changing his flat tire and deliberately slowed in front of Harvick. By acting as a rolling chicane, Elliott allowed teammate Kyle Larson to catch Harvick and finally, with four laps remaining, pass Harvick for Larson's sixth win of the season.

“Chase was obviously upset with the contact, was just making things kind of tough on him. It kept me in the game,” Larson said after collecting the checkered flag.

He was celebrating as Harvick and Elliott jawed with each other on pit road, Elliott wagging his finger in Harvick's helmet-protected face. The discussion spilled into the garage area, where reporters picked up Harvick's promise to run Elliott over moving forward, before the drivers continued their dispute in private.

“Obviously Kevin felt like it cost him the win, which it very well may have. He’s going to be upset,” Larson said.

He accused Elliott of throwing a temper tantrum over what should have been a standard racing incident.

“We were racing for the frickin’ win at Bristol, we’re three-wide in the middle,” Harvick said of the sequence.

But Elliott indicated it's a pattern with Harvick that he's tired of tolerating.

“It’s something he does all the time. He runs into your left side constantly at other tracks. Sometimes it does cut down your left side, other times it doesn’t," Elliott said. “Did it to me in Darlington a few weeks ago because he was tired of racing me. Whether he did it on purpose doesn’t matter. At some point you have to draw a line."

Harvick has now gone 36 races without a victory, a full year since his win at Bristol in last year's playoffs. It was the last of his nine victories in a season that fell frustratingly short of a second Cup championship.

Now he's labored through a tough season at Stewart-Haas Racing, where teammate Aric Almirola has the organization's only win and was eliminated from the playoffs at Bristol. Harvick is 12th in the standings headed into the start of the second round of the playoffs, a three-race round in which the field will be trimmed to eight.

He said before the playoffs began that he didn't need victories to win the championship, citing Matt Crafton's 2019 Truck Series title in a winless season as evidence. But that's certainly not the way Harvick wants to roll through the final seven races of the season, and that victory he was denied at Bristol cost him valuable points he knows he needs.

His frustration was real at Bristol and perhaps a fuse has been lit in Harvick that had dimmed since he was eliminated from the playoffs last year. If Harvick has it out for Elliott moving forward, then he's most likely going to deliver some payback.

But Harvick might wait weeks to mess with Elliott on the track, a tactic that could rattle the champion if he's always wondering what Harvick has planned.

Maybe that's a flawed strategy, though. In standing up for himself, Elliott took an important step in his growth as the face of NASCAR. He's had issues before with Denny Hamlin, Joey Logano and Kyle Busch, but Elliott never actually did anything about it the way he messed with Harvick's race at Bristol.

Larson plans to sit back as a spectator for whatever lays ahead these final seven weeks.