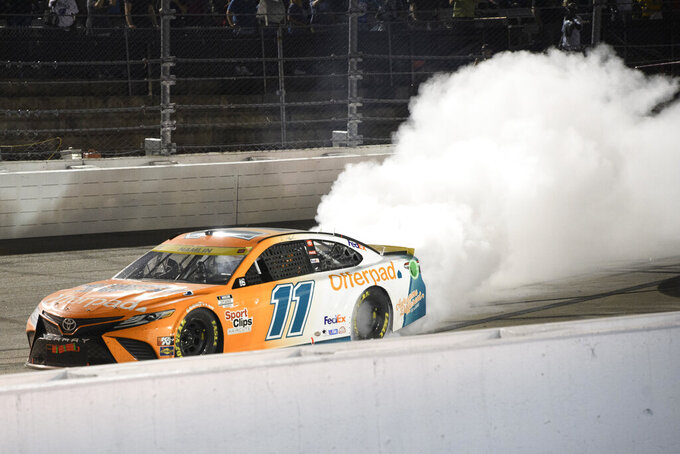 DARLINGTON, S.C. (AP) — Denny Hamlin shook off a difficult week in the best way possible — ending his season-long winless drought with a victory at the Southern 500 to open the NASCAR Cup Series playoffs.

The week's problems included some personal issues and continued at the track Saturday when Hamlin was in line to win the Xfinity event here until a pit penalty dropped him back.

This time Hamlin had to hold off the season's top playoff seed in Kyle Larson, who closed to Hamlin's bumper racing to the finish line Sunday night.

“It's certainly significant,” Hamlin said. “This one's big for us and our team and our momentum."

And it moved him into the second round without having to scrape for points with close finishes as he did to qualify seventh for the playoffs this season.

“It wasn't a perfect night,” Hamlin's crew chief Chris Gabehart said. “It is hard to be perfect at the Southern 500. But it was good enough.” Series playoffs.

Hamlin won for the first time this season after entering the week seeded seventh in the 16-driver postseason field and vowing if he kept running strongly up front, he'd reach Victory Lane before the year ended.

“It’s as good a time as any right?” Hamlin said in victory lane. “My favorite race of the year.”

He looked like a comfortable winner before the top-seeded Larson charged up on his back bumper on the final turn, smoke pouring out of Larson's car. But Hamlin held firm up near the wall to take the checkered flag

“He was going to have to go through me,” Hamlin said.

Hamlin's personal life became a topic earlier this week, with the mother of his two daughters seeming to use social media this week to end their relationship. Her account has since been deactivated.

Hamlin, when asked about any distractions, said, “I'm a professional and do my job the best I can and today I thought we did as good as we could.”

Hamlin came out second to Joe Gibbs Racing teammate Martin Truex Jr. during a caution with 45 laps to go, and moved in front when Truex was penalized for going too fast in the pits.

Hamlin broke out ahead of Larson on the restart 36 laps from the end.

The win was Hamlin's fourth at Darlington Raceway and moved him into the round of 12 in the knockout format in a grueling race where several playoff contenders struggled at the track “Too Tough To Tame.”

The past two series champions, Kyle Busch in 2019 and Chase Elliott last year, were in the garage before the race ended. Busch slammed the wall — to the delight of large crowd back at Darlington — and drove straight to his hauler.

Elliott was caught in a three-wide sandwich where he was next to the wall. He came away with tire and brake problems.

Larson was second for the third straight time racing at Darlington. He led the most laps, 156 out of 367.

He made it crazy at the end.

“I didn't want to wreck him. I just wanted to get to his outside,” Larson said. “He did a great job, not really making any mistakes on that last run.”

Ross Chastain finished third, the only non-playoff driver among the top eight.

Chastain ran among the playoff cars most of the night. He was asked what he needed to breakthrough here. “A better driver,” he chuckled. “I can go fast, I just can't quite race with them.”

Chastain will drive the No. 1 car for Trackhouse Racing in 2022.

Plenty of drivers with high playoff hopes left Darlington with problems, including two-time series champion Busch. Soon after the start of stage two, the fourth-seeded Busch was racing close with Austin Dillon when he hit the outside wall in turn two, slid into the inside wall and drove straight to garage. Busch even plowed through some safety cones as he left the track.

Busch blamed his Toyota Camry, dropping a couple of expletives about the bad run. “We were running terrible and we got wrecked,” said Busch, who finished 35th.

Earlier, Daytona 500 winner Mike McDowell hit the wall on the backstretch on lap 30 and was done for the day. McDowell came in seeded 13th and finished dead last in 37th.

William Byron, the eighth seed, couldn't avoid Hendrick Motorsports teammate Alex Bowman early on after the No. 48 hit the wall. On the 199th lap, Byron slammed hard into the wall entering turn one and ended his run. Byron was 34th.

And defending champion Elliott saw his race end when he hit the wall on a three-wide run and left with a flat tire and brake problems 42 laps from the end. Elliott was 31st.

The NASCAR Cup series playoffs continue at Richmond, Virginia, on Saturday. Brad Keselowski won there in Sept. 2020 while Alex Bowman won there this past April.