Column: Herta's profile elevated as he rolls into Indy 500 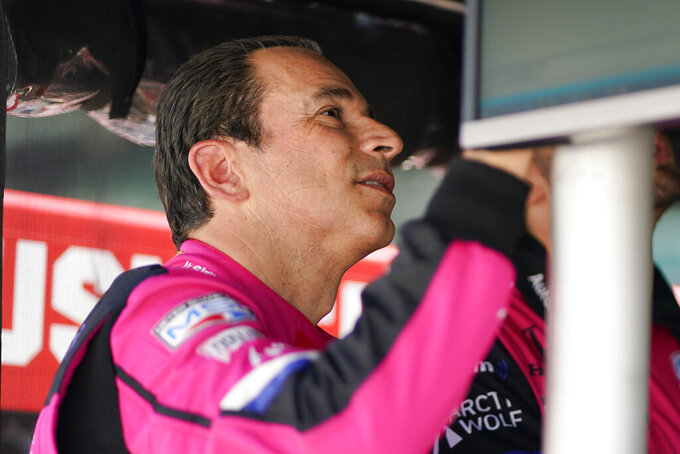 Helio Castroneves, of Brazil, looks at the results from practice for the IndyCar auto race at Indianapolis Motor Speedway, Friday, May 13, 2022, in Indianapolis. (AP Photo/Darron Cummings)

INDIANAPOLIS (AP) — The stage now belongs to Colton Herta, the young American driver who through both patience and persistence has forced his way into international conversations.

Herta effortlessly navigated his way through three days embedded with McLaren at Formula One's Miami Grand Prix, where he got an invitation-only closeup of his upcoming opportunities. He will test for McLaren at some point this season, and Herta just might be the one to end the seven-year drought of an American driver on the F1 grid.

He still has his current job, of course, and on Saturday picked up his first win of the IndyCar season with an entertaining drive through the rain on the road course inside Indianapolis Motor Speedway.

Now it's time for the main event, the Indianapolis 500, a race that really could fast-track Herta's hopes of landing an F1 seat. Indianapolis Motor Speedway opens Tuesday for practice and the buildup to “The Greatest Spectacle in Racing” on May 29.

“It’s nice for momentum,” Herta said after his seventh career victory. “For the team and for me to be on a high note going into the month of May, it feels great. Hopefully we can reap some of the benefits of that, turn that into some speed and everyone is going to be working that much harder to be back (in victory lane) in two week’s time.”

Herta chased his F1 dreams early in his career when he moved to England alone as a teenager and tried to work his way through the ladder system. His path stalled and he returned to the United States ahead of the 2017 season.

Now he's the star driver at Andretti Autosport seeking a career-changing Indy 500 victory. F1 has gained massive traction in North America and American companies have been lining up to join the action. As Herta tries to leapfrog Dalton Sargeant (a Floridian competing in F2) and Jak Crawford (a Charlotte native competing in F3) as F1's next American, he can use the Indy 500 to attract the sponsorship that could get him into the global series sooner rather than later.

Alexander Rossi, Herta's current teammate at Andretti, was the last American driver to start an F1 race in 2015.

Herta was spectacular at Indy in the rain on Saturday and the in-car camera angles of the 22-year-old Californian manhandling his steering wheel — and saving a slide on the wet track from a disastrous spin — were breathtaking.

But the 500 is an entirely different beast, which Herta learned firsthand last year with a strong leadup to race day. He qualified second, started on the front row and led 13 laps before strategy backfired and he faded to a disappointing 16th-place finish.

The field this year is as competitive as ever and headlined by defending Indy 500 winner Helio Castroneves, who will seek a record fifth victory. Will Power has quietly put together one of the best season starts of his career, and although he's the only Team Penske driver without a win through five races this season, he's yet to finish lower than fourth and moved into the IndyCar points lead over the weekend.

Reigning champion Alex Palou finished runner-up to Castroneves in the 500 a year ago and was fixated on what he did wrong to lose the race. Juan Pablo Montoya returns for a second-consecutive season as he tries to win for the Indy 500 for a third time and he's again teamed with Arrow McLaren SP and Pato O'Ward, the popular young Mexican driver Herta is trying to beat to F1.

O'Ward tested for McLaren in December in Abu Dhabi. But when McLaren offered Herta and O'Ward identical testing contracts for 2022, only Herta signed immediately. O'Ward has since agreed on principle to a contract extension with McLaren; it is not clear if he will test in F1 this year.

Herta, O'Ward, Palou and Rinus VeeKay were the four fresh IndyCar faces last May as all four had won races ahead of the 500 in a rapidly changing youth movement in the series. The series has since added rookies Kyle Kirkwood, the Indy Lights champion, and Callum Illot and Christian Lundgaard have moved to IndyCar from F1 feeder series. Illot was also in Miami a week ago as the Alfa Romeo test driver.

And then there are the two big stars, both making their Indy 500 debuts.

Romain Grosjean will run the 500 for the first time now that he's added ovals to his schedule. As a teammate to Herta and Rossi at Andretti, he should have a fast car.

Seven-time NASCAR champion Jimmie Johnson skipped the ovals last season but now looks forward, at age 46, to his Indy 500 debut. He won the Brickyard 400 four times on Indy's oval in a stock car and was sixth in March at Texas in his first race on that oval in an Indy car.

None other than Mario Andretti has declared Johnson a legitimate contender. Andretti and A.J. Foyt are the only two drivers in history to win both the Daytona 500 and the Indy 500; Johnson is a two-time winner at Daytona.

“Come the 500, he’s gonna be a force to be reckoned with,” Andretti said. "He knows enough about the car. He’s definitely a dark horse.”