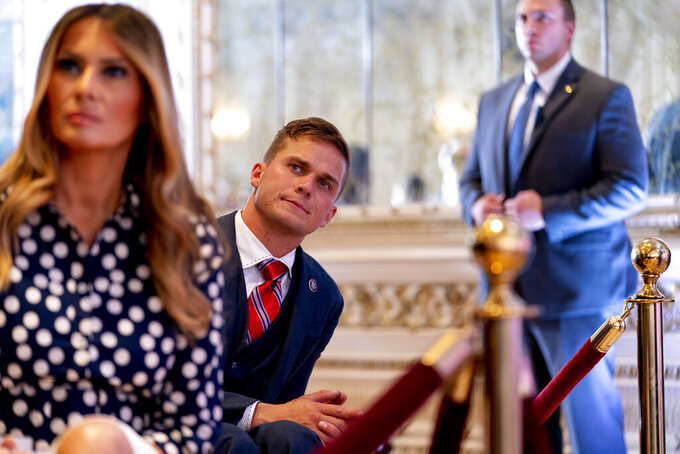 RALEIGH, N.C. (AP) — Departing U.S. Rep. Madison Cawthorn of North Carolina has been told to pay over $14,000 to charity after the House Ethics Committee found he financially benefited while purchasing a cryptocurrency that he was promoting and violated conflict of interest rules.

The committee found Cawthorn, who lost his reelection bid in May's primary, “acted in a manner that did not reflect creditably upon the House” based on his total conduct, according to the panel’s report and admonishment released Tuesday. That conduct, the report found, included “his repeated and knowing promotion of a cryptocurrency in which he held a financial interest.”

“While cryptocurrency promotion, particularly of a ‘meme coin,’ may be a novel issue before the committee, whether a member may promote an asset in which that member has a financial interest is not a novel question,” the report said. Cawthorn also was told to pay $1,000 in late fees on reports filed for his cryptocurrency transactions.

The committee also accepted other findings and recommendations from a investigative subcommittee — led by committee chairwoman Rep. Veronica Escobar, D-Texas, ranking member Rep. Michael Guest, R-Miss. — that located no evidence Cawthorn had an improper relationship with a staff member.

Committee leaders announced an investigation of Cawthorn on the matters a week after his primary defeat to state Sen. Chuck Edwards, who went on to win the general election for a western North Carolina seat last month. Cawthorn, who was a strong supporter of President Donald Trump, was seen as a rising star by many conservatives when at age 25 he won the seat vacated by Mark Meadows, Trump’s then-chief of staff.

His term in office has been marked by a series of unforced political and personal errors, including stops by police while driving; being caught with guns at airport checkpoints; calling Ukrainian President Volodymyr Zelenskyy a “thug;” and the release of videos showing him in sexually suggestive poses.

Cawthorn “is pleased to note that the committee fully exonerated him of the false, malicious, and stupendously idiotic allegations of an improper relationship with staff members,” spokesperson Micah Bock said in an emailed statement. Cawthorn plans to make donations to a gun-rights group and a spinal cord and paralysis treatment center, Bock said.

The subcommittee’s report found that in December 2021 Cawthorn provided a $150,000 check for 180 billion LGB Coin.

But the actual value of the amount of LGB Coin at the time he received it was more than what he had paid, according to the report, which called it an improper gift. That prompted the committee to direct Cawthorn to give $14,237.49 to charity.

The transaction occurred just before LGB Coin announced it would sponsor NASCAR driver Brandon Brown in 2022, but NASCAR soon withdrew its approval in early January. Cawthorn sold nearly all of the “meme” coin in three batches in December 2021 and January 2022, the committee said, but the congressman didn’t disclose either the purchase or sales until the investigative subcommittee was announced.

Cawthorn also had been in photographs and videos encouraging people to purchase LGB Coin. The subcommittee said it didn’t reach a consensus on whether Cawthorn intended to profit personally from those promotions. And while the subcommittee found he violated ethics law by failing to disclose timely his investment, it decided the failure wasn’t knowing or willful, declaring he was misinformed about relatively new requirements related to cryptocurrency.

As for the investigation into Cawthorn's relationship with a staff member, the staffer at issue told investigators that he is Cawthorn's second cousin. House rules or law related to nepotism apply to first cousins, the report said. The staffer was hired as Cawthorn’s scheduler and assisted him with his disability. Cawthorn uses a wheelchair after being partially paralyzed from a car accident as a teenager.

The investigation followed the release in the spring of photographs and videos depicting Cawthorn and the staffer “engaging in explicit and sexually suggestive comments and conduct.” At the time, Cawthorn described a video as “just stupid locker room talk between two cousins that grew up like brothers, taken long before I served in Congress.”