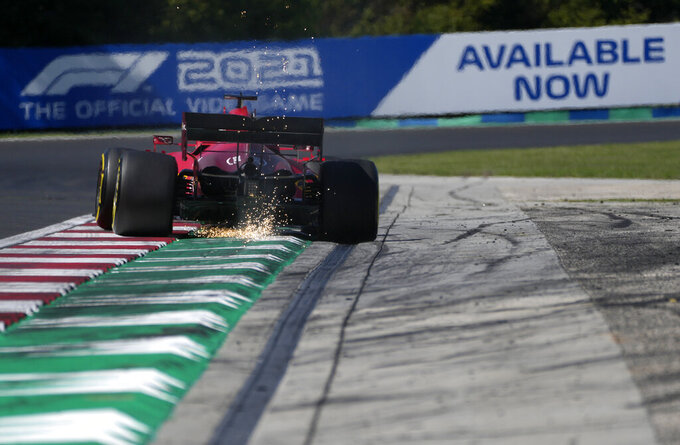 Ferrari driver Charles Leclerc of Monaco steers his car during the second free practice at the Hungaroring racetrack in Mogyorod, Hungary, Friday, July 30, 2021. The Hungarian Formula One Grand Prix will be held on Sunday. (AP Photo/Darko Bandic)

BUDAPEST, Hungary (AP) — Valtteri Bottas likened the sweltering heat in his Formula One car to taking a sauna back home in Finland after completing the fastest second practice ahead of Mercedes teammate Lewis Hamilton at the Hungarian Grand Prix on Friday.

Championship leader Max Verstappen was third, having led the two Mercedes in the first practice.

Bottas was a narrow .027 seconds ahead of Hamilton and .298 clear of Verstappen, who leads Hamilton by eight points overall after 10 races.

Mid-afternoon air temperatures reached 36 Celsius (97 F) at a Hungaroring circuit drenched in sunlight. With a racing suit and helmet on, and with heat rebounding off the track, it felt far hotter.

“It felt like being in a Finnish sauna, it’s way more than 60 degrees (140 F) in the cockpit,” Bottas said. “It makes it tricky with the tires overheating.”

The heat might even have got to Hamilton, with the seven-time world champion making a rare mistake when he misjudged a turn and went off track.

“It was roasting today, I’ve probably lost three kilos (seven pounds) out there and the tires were melting,” he said. “To see Valtteri and I at the top of the timesheets is pleasing.”

Verstappen, who had some issues with the front wing late on, had some radio exchanges with his team during a tricky afternoon session.

“We had a few adjustments that we were working on, that we need to look into,” Verstappen said. “There are a lot of things to analyze this evening but there’s nothing too big to overcome. The track was very hot today, but it looks like there’s a bit of rain coming so that should make things interesting.”

French driver Esteban Ocon was an encouraging fourth for the French-owned Alpine team.

But Ferrari struggled for pace with Charles Leclerc 11th and Carlos Sainz Jr. in 12th.

There is a third and final practice on Saturday followed by qualifying in the afternoon.

Getting pole position could prove crucial in the race.

The sinewy and tight Hungaroring is arguably the hardest track to overtake on after Monaco — where Ferrari's Charles Leclerc took pole position this season for the ninth of his career.

Leclerc's younger brother, Arthur Leclerc, took the first pole of his career at the Hungaroring on Friday, in F3.

In the first practice, Verstappen beat Bottas and Hamilton.

He went to the top of the board with about 10 minutes left, pipping Bottas by .061 and defending champion Hamilton by .167.

Tensions between Hamilton and Verstappen have been running high since last Sunday's British GP, where Hamilton won after Verstappen crashed following contact with his Mercedes on Lap 1. Verstappen was upset with Hamilton's jubilant celebrations while he was having checks in hospital.

Red Bull's appeal of the incident was rejected by governing body FIA on Thursday and no further action was taken against Hamilton, who won at Silverstone despite being handed a 10-second time penalty.

In a remarkable near-miss during practice, Verstappen and Hamilton almost collided in the pit lane as they exited their garages.

Sainz Jr. was fourth ahead of AlphaTauri's Pierre Gasly.

The hour-long session was briefly held up with about 20 minutes left after Japanese driver Yuki Tsunoda's AlphaTauri hit a wall. He was unhurt.

Verstappen leads Hamilton 5-4 for wins, with Red Bull's Sergio Perez the only other driver to win.

There is a four-week summer break after Sunday's race, where Hamilton will look to win in Hungary for a record-extending ninth time and fourth straight.