Alonso and McLaren miss Indy 500 on first day of qualifying 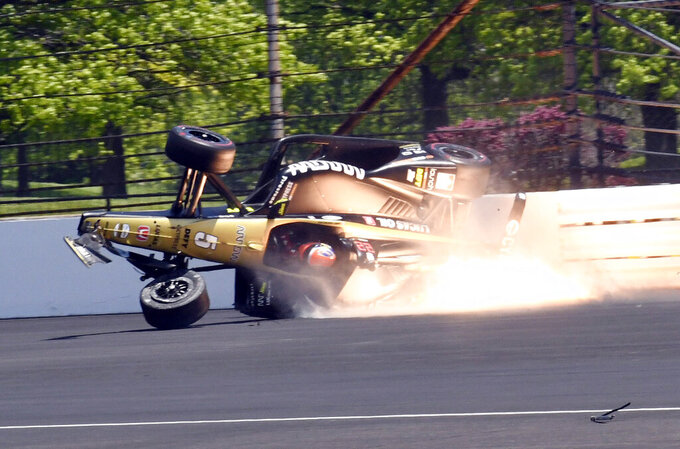 James Hinchcliffe, of Canada, slides into the backstretch after hitting the wall along the second turn during qualifications for the Indianapolis 500 IndyCar auto race at Indianapolis Motor Speedway, Saturday, May 18, 2019, in Indianapolis. (AP Photo/Greg Huey)

INDIANAPOLIS (AP) — McLaren's return to the Indianapolis 500 neared a total collapse after Fernando Alonso failed to lock himself into the field on the first day of qualifying.

The two-day qualifying process guaranteed a spot in the May 26 race for the fastest 30 cars in Saturday qualifying. It took Alonso four attempts just to crack the benchmark, but he was knocked out by Graham Rahal, the final driver to make his run as the pistol was fired to signal the end of the session.

The two-time Formula One world champion watched Rahal knock him into Sunday's last-gasp group, hopped from his car and briskly walked down pit lane. He stopped briefly to sign a handful of autographs but seemed frustrated with McLaren's weeklong struggle at Indy.

"We didn't have the speed," the Spaniard said. "If we don't make it, it is because we don't deserve it."

McLaren returned to the Indy 500 this year for the first time since the 1970s as an expected rehearsal for a fulltime IndyCar entrant. Alonso needs only to win the Indy 500 to complete motorsports' version of the Triple Crown, but no one expected the proud McLaren organization to struggle so much on each day the track has been open.

The car had an electrical problem during last month's testing and was plagued with similar issues on opening day. The alternator and wiring loom needed to be replaced, then Alonso crashed and hit the wall three times Wednesday. McLaren missed nearly two days on track trying to ready a backup car, which finally got out Friday.

And it was slow.

And it was still slow when qualifying began Saturday.

"(It's) kind of a frantic situation trying to get the car comfortable for him and he's doing all he can do," said driver coach Johnny Rutherford, a two-time Indy 500 winner for McLaren.

Alonso's first run was spoiled by a cut tire, his next two just weren't up to an acceptable speed. He finally cracked the top-30 on his fourth run but knew it might not hold, so he waited inside his car in case he got a final shot to avoid the "Last Row Shootout" on Sunday. Six drivers will get one qualifying attempt for the final three spots in the field.

"At the moment, all we can try to do is the four laps, clean, no mistakes, flat on the floor," Alonso said. "Then, if it's enough to be in the top three of six, we'll take it and we'll try to go race. If it is not enough, if we are the fourth, fifth or sixth, it is what we deserve. There were three cars quicker than us and there's nothing we (will be able to) do more than that."

If Alonso and McLaren don't make the race, it would be one of the biggest failures in Indy 500 history. Roger Penske missed the show with Al Unser Jr. and Emerson Fittipaldi in 1995, a year after dominating the race. Reigning CART champion Bobby Rahal missed it in 1993, and two-time Indy winner Rodger Ward never got up to speed 1965 to make the field.

Alonso will be racing against James Hinchcliffe, who last year was bumped out of the race when qualifying was just one day. Hinchcliffe crashed on his first qualifying attempt Saturday and couldn't get his backup to the speed needed.

Hinchcliffe has a rocky history with Indianapolis Motor Speedway and was nearly killed in a 2015 crash in which a part punctured an artery and he nearly bled to death en route to emergency surgery.

The other four drivers racing in the "Last Row Shootout" are Kyle Kaiser and Patricio O'Ward, who both crashed this week and are in backup cars, as well Sage Karam and Max Chilton. Hinchcliffe and Chilton are full-time IndyCar entrants and there's been debate this year over guaranteeing spots in the field to the teams that compete in every event.

Kaiser crashed Friday and his Juncos Racing team worked through the night to prepare his car, which lost both its primary sponsors earlier this week. Karam has been spooked somewhat at Indy this year and struggled to push the limits in qualifying. O'Ward's backup car is specifically built for road courses, not the Indy oval.

As the bottom six was finalized with Rahal's run, it was a massive relief for Pippa Mann, the second driver along with Hinchcliffe bumped from last year's race. She cemented her spot when Rahal knocked Alonso out of the top 30 and the only woman in the field was in tears when Rahal crossed the line.

Spencer Pigot of Ed Carpenter Racing led a Chevrolet sweep at the front of the field and posted a four-lap average of 230.083 mph to top the speed chart. The Team Penske contingent of Will Power, Simon Pagenaud and Josef Newgarden followed.

Colton Herta, a rookie with one series victory already this year, cracked the top nine on his first qualifying attempt but wasn't satisfied and made a second run later in the day. It was risky because he could have dropped outside the Fast 9, but he instead jumped to fifth with the fastest Honda.

The rest of the Fast 9 is Pigot's teammates Ed Jones and Ed Carpenter in Chevys, then Alexander Rossi and Sebastien Bourdais in Hondas.

Indianapolis is supposed to be hit by a lengthy day of rain Sunday, and if cars can't get on track, the field will be set by the current speeds and Pigot will be the pole-sitter for "The Greatest Spectacle In Racing."

Should the slowest six not get a chance to qualify, IndyCar will run the shootout for the last row Monday.