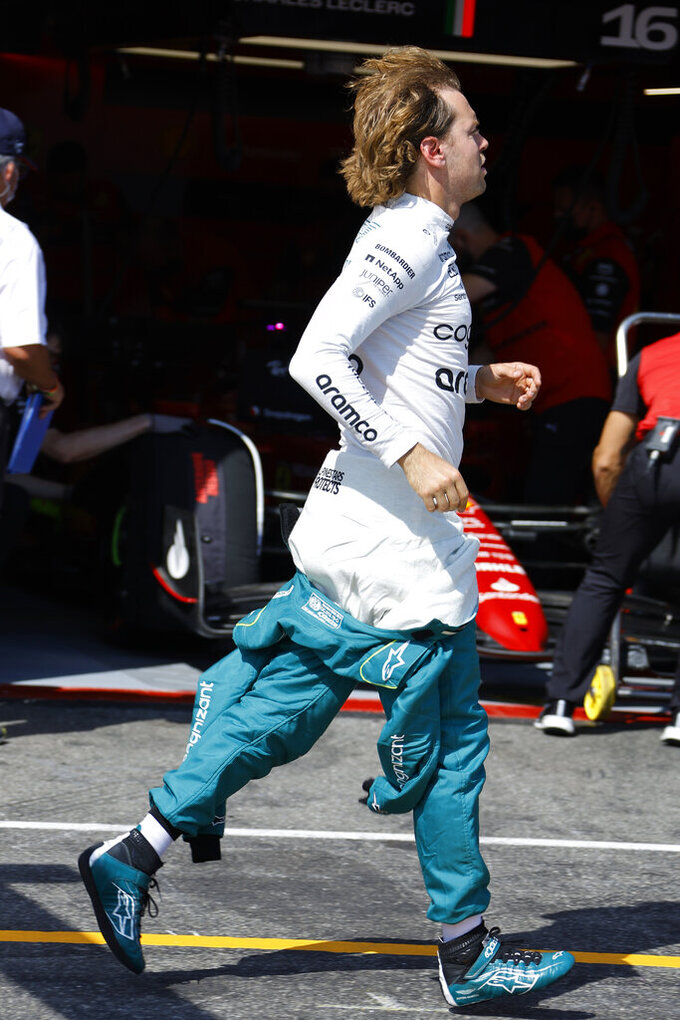 BUDAPEST, Hungary (AP) — Sebastian Vettel considered retiring from Formula One for quite some time before finally announcing Thursday this season will be his last.

The German, who joined Instagram on Wednesday, used the platform one day later to announce he plans to spend more time with his family and work on causes close to his heart.

Vettel won his four F1 titles from 2010 to 2013 with Red Bull, but his last victory was with Ferrari in 2019. His best finish this season with Aston Martin is sixth.

“I feel that obviously this decision has been in my head for so long now, and has taken so much energy to be honest, and maybe even at times distracted me," he said Thursday. "There was a lot of thought leading into this. I think it’s the right time for me to do other things.

“So much dedication means also a lot of time spent in your head, in your thoughts, but also physically away from home, from kids, family," added the 35-year-old. “I’ve grown other things, other than the children who are growing, it’s other interests and views. I can’t ignore these voices."

He has been increasingly outspoken on environmental issues.

“It's one of the one of the factors that definitely played a role,” he added. “I understand that part of my passion, my job is coming with things that I’m not a fan of, obviously, travelling the world, racing cars, burning resources. Once you see these things, and once you’re aware, then I don’t think you can really unsee."

Vettel's title bids with Ferrari were unsuccessful after promising starts were undone by driver errors. He led the standings at the midway point in 2017 and was in contention the following year, only to lose both championships to Hamilton. He crashed from pole at the Singapore Grand Prix in 2017 and swerved off track into the barriers when comfortably leading the rain-soaked German Grand Prix the following year.

He was stunned when Ferrari did not renew his contract after he struggled to compete alongside newcomer Charles Leclerc in 2019, and again in 2020.

“It’s sad. Obviously it’s going to be strange not to see Seb in the paddock," Leclerc said. “I arrived the first year and I was probably very weird to him because I was just shy and didn’t know what to say. Now he’s a friend and he always texts me."

Along with Hamilton, Vettel has also been increasingly vocal about human rights conditions in countries where F1 races.

“I am tolerant and feel we all have the same rights to love, no matter what we look like, where we come from and who we love,” he said.

His stance on protecting the environment has also escalated. At the Austrian GP in Spielberg three weeks ago, he wore a T-shirt with “Save the Bees” written on it. At the Canadian GP in June he had the message, “Stop mining tar sands. Canada’s climate crime,” written on his race helmet.

“I feel we live in very decisive times and how we all shape these next years will determine our lives. My passion comes with certain aspects that I have learned to dislike," Vettel said. "They might be solved in the future but the will to apply that change has to grow much, much stronger and has to be leading to action.”

“It's extremely personal. It's how you feel and what you want to do," the 32-year-old Mexican driver said. “You put other priorities in place and you are not willing to pay the price of being an F1 driver.”

“You're losing a bit of a legend of the sport," Ricciardo said.

“Everyone in the paddock loves him and you will hear anything saying a bad word about Seb,” Sainz said. "I hope we will see him back helping the sport in some of the ways he’s been very vocal about.”

Russell called Vettel “such an inspiration” and will miss the meetings when Vettel spoke up for drivers.

“You do learn how much general knowledge he has, how much F1 knowledge," Russell said. "It is quite inspiring to see. Above all he’s just a great bloke, a great human being."

“It grew back magically,” Verstappen said. “I wish I had that.”