Verstappen to start at back of grid for Russian Grand Prix 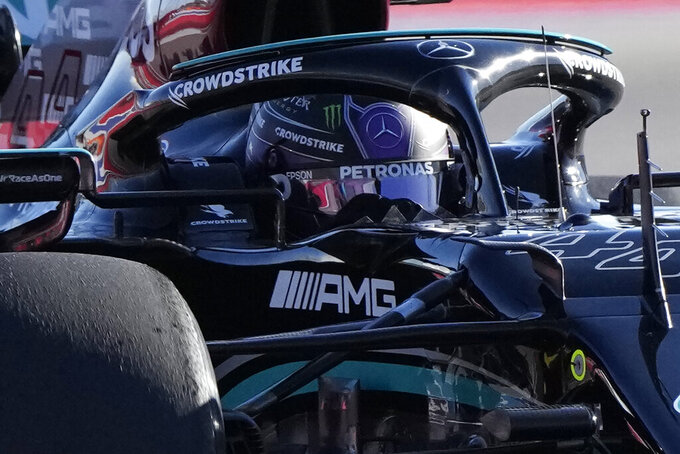 Mercedes driver Lewis Hamilton of Britain steers his car during the second practice session at the Sochi Autodrom circuit, in Sochi, Russia, Friday, Sept. 24, 2021. The Russian Formula One Grand Prix will be held on Sunday. (AP Photo/Sergei Grits)

SOCHI, Russia (AP) — Formula One leader Max Verstappen will start at the back of the grid at the Russian Grand Prix after the team confirmed Friday he would use a new engine and accept the resulting penalty.

Verstappen had to go over his allocation of engines for the season because one was damaged when he crashed after making contact with Lewis Hamilton at the British Grand Prix in July.

Verstappen said he would have needed a new engine at some point before the end of the season.

“We had to take the penalty at some point so if we didn't take it here, we would have taken it somewhere else,” he said. “We are trying to make the best possible race car for this weekend despite starting from the back of the grid. I hope it's going to work out and we will try to make the best of it during the race on Sunday.”

The Dutchman finished third in the opening practice session for the race behind Mercedes teammates Valtteri Bottas and Hamilton, and sixth in the second session.

Bottas' best time of 1 minute, 33.593 seconds came in the second session and was .044 faster than Hamilton. Pierre Gasly was third-fastest for AlphaTauri in that session.

Bottas and Hamilton went 1-2 in the opening practice as well.

Ferrari driver Charles Leclerc will also start at the back in Russia because of an engine change.

Verstappen holds a slim five-point lead over Hamilton in the F1 standings. He already had a three-place grid penalty for the race in Russia because of his role in another crash with Hamilton at the last race in Italy. That will essentially be canceled out by his much larger penalty for the engine switch.

Verstappen said the rain forecast for qualifying Saturday played a part in Red Bull's decision. The rain might shake up the starting order at a circuit where Mercedes has won all seven F1 races, with four wins for Hamilton.

Mercedes team principal Toto Wolff said Hamilton would no longer back down when fighting Verstappen through a corner.

“These two are racing for a driver championship and you can’t expect them to have velvet gloves on. And that’s why we are going to see harsh moments like this, I believe,” Wolff said Friday.

“They also race each other very close now, which wasn’t the case in the past, and we are discussing these things in detail as well. And I think the change of approach is that Lewis pretty much decided not to bail out any more when he thinks that the corner is his. Now it needs two to tango, it needs two to understand each other on track when when a collision can be avoided."

“Max is a no-quarter kind of guy. Lewis has demonstrated that he doesn’t want to give anything either, and when you get two racers of that mentality, you get incidents,” Horner said.

Heavy rain is forecast for the weekend and organizers are already making backup plans in case qualifying can't be held on Saturday as scheduled. A Formula Three race has already been moved from Saturday to Friday to leave more space in the timetable.

Times from the second practice session could be used to determine the grid in the unlikely event that no qualifying session can be held before the race on Sunday.