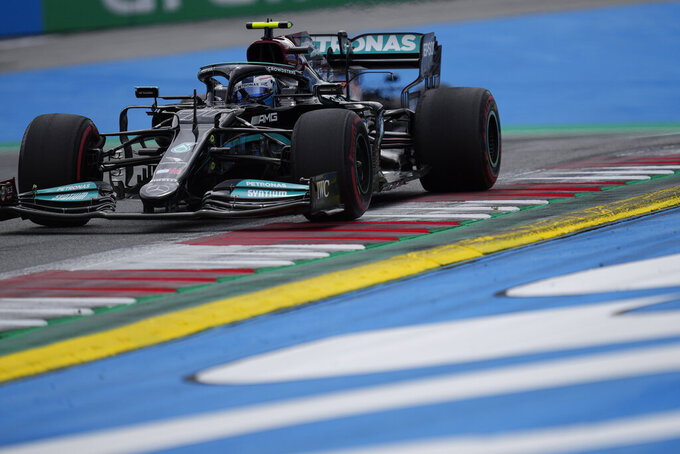 Mercedes driver Valtteri Bottas of Finland steers his car during the second practice at the Red Bull Ring racetrack in Spielberg, Austria, Friday, June 25, 2021. The Styrian Formula One Grand Prix will be held on Sunday, June 27, 2021. (AP Photo/Darko Vojinovic)

SPIELBERG, Austria (AP) — Formula One leader Max Verstappen was fastest in both practices at the Styrian Grand Prix on Friday, with defending champion Lewis Hamilton finishing nearly four-tenths of a second off the pace in fourth place.

Hamilton’s teammate, Valtteri Bottas, was punished with a three-place grid penalty at Sunday's race and two penalty points for “dangerous driving in the pit lane” after his involvement in a rare incident in the second practice.

His Mercedes spun shortly after its release following a tire change and Bottas just avoided colliding into McLaren mechanics in the next box.

According to the FIA, Bottas said in the hearing with stewards "that in the past they have been losing time in the pit departure. So they tried something new, which was to leave in second gear. As a result, the wheel spin was much higher and the result unexpected.”

Bottas didn’t return to the track and finished P2 in 12th.

Practice took place in a drizzle, though the track was not slippery.

Verstappen shaved 0.5 seconds off his leading P1 time in the afternoon session.

“Although there are a few things to look into, which is very normal for a Friday, I am quite happy with where the car is at the moment,” Verstappen said.

“In the second practice, Lewis had a faster lap time that was deleted so it looks a bit different to what is shown at the moment on the timesheets but we expect to see both teams at the top.”

Hamilton's lap, .077 faster, was invalid as the seven-time world champion exceeded the track limit in one of the turns. He was third in the first practice.

McLaren’s Daniel Ricciardo and Renault’s Esteban Ocon were over three-tenths of a second behind in second and third places respectively.

AlphaTauri’s Pierre Gasly, who posted the second fastest time in P1, sat out the afternoon session while team mechanics were working on his car. Team principal Franz Tost said data from the first practice showed irregularities, indicating an unknown issue with the power unit.

Both Ferraris failed to make the top 10.

The third practice is scheduled for Saturday, followed by qualifying.

Hamilton and Bottas won the two races held on the track in the Austrian Alps last year, while Verstappen triumphed in 2018 and 2019.

Verstappen leads overall with 131 points, followed by Hamilton on 119, and Sergio Perez third on 84.

Perez clocked only the 13th and ninth fastest times, respectively.

Red Bull arrives at its home track on the back of a three-race winning streak, the team’s first since the introduction of the hybrid power units in 2014.

For its engine supplier Honda, three wins in a row is its first time since 1991 when Ayrton Senna won the opening four races.