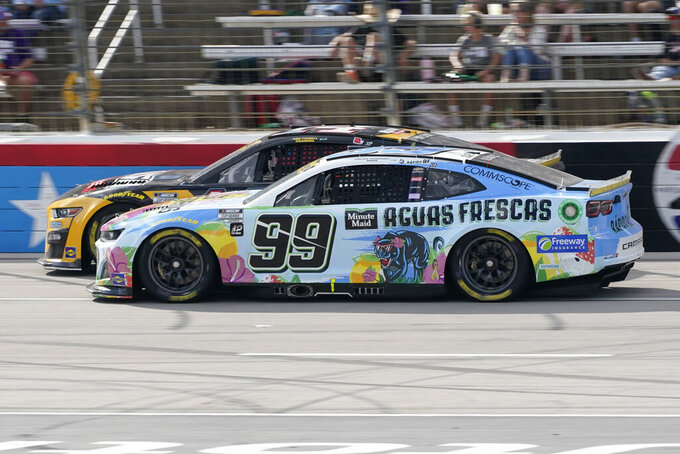 CONCORD, N.C. (AP) — The first racing book Justin Marks ever read was called “The Unfair Advantage,” written during a one-year sabbatical by the late Mark Donohue about his boss Roger Penske.

Marks grew up in admiration of Penske, Rick Hendrick and Joe Gibbs, the top owners in American motorsports. When he was 15, Marks got his picture taken with Gibbs at the 1996 Daytona 500. He wanted to be a racecar driver and made it happen with 80 starts across NASCAR's three national series.

He never ran a full season, won only one career race and eventually switched to his entrepreneurial efforts, which included entering NASCAR ownership. He started Trackhouse Racing one season ago.

On Sunday, the organization enters its 100th race poised to advance both its drivers into the round of eight.

The 41-year-old is beyond humbled at what he's accomplished and how quickly the team has become a legitimate challenger to NASCAR's big dogs.

“These guys were my heroes and they represent what the true top of the sport is, a sport that I’m so passionate about," Marks said. "Just to have an opportunity to walk through the garage as colleagues is incredibly humbling. Then for us to be in the playoffs and in position to compete against them this deep is just humbling and a testament to how talented everyone is in this building and how hard they are working.”

Ross Chastain and Daniel Suárez have combined this season to give Trackhouse its first three wins in team history. Chastain heads into Sunday's playoff race on The Roval at Charlotte Motor Speedway ranked third in the standings, needing to finish ninth or better to automatically advance into the next round. Suárez is seventh in the standings, 12 points above the cutline needing a finish in the top eight to guarantee he advances.

The field will be trimmed from 12 to eight but really only three drivers will be dropped: Alex Bowman is sidelined for a second consecutive week with a concussion and will be eliminated.

Suárez believes he and Chastain can both contend for the race win on Charlotte's hybrid road course that uses part of the oval. Chastain scored his first career Cup win on the COTA road course in Texas and Suarez's only Cup win came on the Sonoma Raceway road course.

“We have a very good road course program at Trackhouse Racing. Both Ross and I have won races and been strong in each race," Suárez said. "It’s a great feeling as a driver to know you have a strong chance to win every time you race.”

Marks launched the team last season around Suárez, the only Mexican driver in NASCAR's top level, on a leased charter because the demand to buy the guaranteed spots in the field was too high. When he found through negotiations last year that the charter price was only rising — 23XI paid a record $13.5 million last season for its second one — Marks took a different route.

He cold-called Chip Ganassi and asked whether Ganassi was interested in selling him his NASCAR team. Ganassi listened to the pitch and in November turned over the keys to his race shop, the contracts for his employees and his two charters. Chastain was retained from the Ganassi lineup and the team has been the surprise of the season.

Marks credits NASCAR's new Next Gen car for some of Trackhouse's success. Although the car is currently under intense scrutiny because three full-time drivers will miss Sunday's race with injuries suffered in crashes, Marks firmly believes the car has delivered on its promise of leveling the playing field and improving competition.

NASCAR heads into Charlotte with a record-tying 19 different winners of points-paying races, while Brad Keselowski and Ryan Blaney won non-points races to make it 21 different drivers in victory lane this season.

“I am a huge believer this car is going to be successful by cultivating a great – and I sound super redundant because I say it all the time – is building a great culture where people are really excited about coming to work here,” Marks said. "The work that we do on these race cars, now that where in such a tight window and you can’t engineer a piece of equipment that is superior to another team’s piece of equipment, it’s the pride that you take in the work that you do in assembling that piece of equipment.

"That is what has given us the opportunity to do what we’re doing.”

Joey Logano won the pole for Sunday's race on The Roval at Charlotte Motor Speedway with a lap of 103.424 mph to earn the top starting spot for the third time this season.

William Byron, who earned 25 points back from an appeals committee this week that keep him in the championship race, qualified second and was followed by Daniel Suárez as playoff drivers took the top three spots.

Tyler Reddick and Austin Cindric, who is below the cutline and in danger of elimination on Sunday, completed the top five. Playoff driver Ross Chastain veered off course during the final round of qualifying and damaged his Chevrolet, which was being repaired so he would not need a backup car.

The No. 78 Live Fast Motorsports Ford for Josh Williams was not permitted to qualify after three failures in pre-qualifying inspection. IndyCar driver Conor Daly's Cup debut got off to a rough start when the No. 50 The Money Team Racing Chevrolet failed inspection twice and Daly brushed the wall in practice.

Chase Elliott, who has already clinched his spot in the round of eight, is the FanDuel favorite. Elliott has won two of his four starts on The Roval. ... Rick Hendrick this week sent a bouquet of flowers to the Petty GMS Racing shop in Statesville to congratulate the team on Erik Jones' win at Darlington and thank them for Jones pushing Elliott to the win at Talladega last week. ... The four drivers below the cut line in danger of elimination are Chase Briscoe of Stewart-Haas Racing, Cindric of Team Penske, Christopher Bell of Joe Gibbs Racing, and Bowman of Hendrick Motorsports. Noah Gragson is replacing Bowman for a second consecutive week.