Steiner to Ricciardo: "Call me up" if he wants seat at Haas 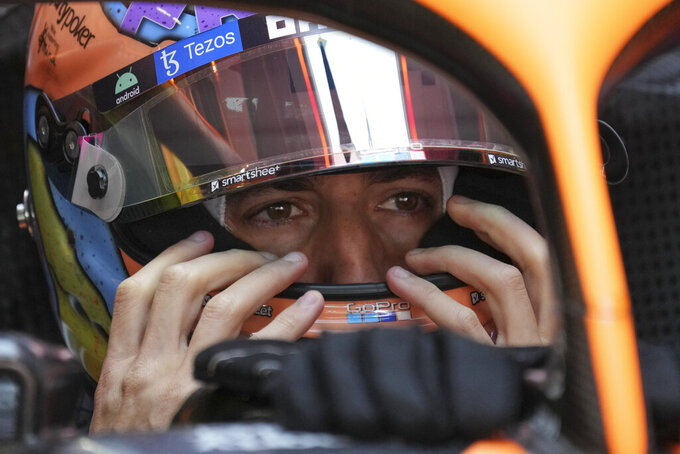 McLaren driver Daniel Ricciardo of Australia arranges his helmet at the practice session 3 during the Japanese Formula One Grand Prix at the Suzuka Circuit in Suzuka, central Japan, Saturday, Oct. 8, 2022. (AP Photo/Eugene Hoshiko)

Daniel Ricciardo must decide what he wants to do with his Formula One future. If he wants to race next season, the bosses at Haas said it is up to the driver to call the team.

McLaren bought out the final season of Ricciardo's contract after two underwhelming seasons. The popular Australian is currently jobless for 2023.

“If he’s interested in us, he’s not shy to call me up. I am not going to chase him down," Guenther Steiner, team principal at Haas, told The Associated Press on Monday.

F1 makes its second stop of the season in the United States this weekend, at Circuit of the Americas in Texas, and the only American-owned team is one of only two with seats open for next season.

Team owner Gene Haas has given Mick Schumacher the remaining four races to prove he deserves a third year in the seat. If Schumacher is not retained, Haas would join Williams as the only teams with seats still open for 2023.

A crazy summer of free agency moves only included Ricciardo because McLaren wanted him out of his seat. Since he accepted the buyout, several other drivers have either received contract extensions or have made other 2023 plans.

Steiner said no driver has been signed yet for the Haas seat alongside Kevin Magnussen, and that he's had little contact with Ricciardo since he sent the driver a friendly text during the height of summer speculation about Ricciardo's job. Gene Haas acknowledged to the AP on Sunday the organization has had conversations with other drivers about Schumacher's seat.

Ricciardo is not one of them.

“I want him to decide what he wants to do for himself, first, before being talked into something,” Steiner told the AP. “I think he's a good driver and I don't know how he got in the situation he's in now, but I think he needs to come clean with himself and decide what he's going to do.”

Steiner finds Ricciardo's last two seasons perplexing. Although he did score a win last season, Ricciardo has been a tremendous disappointment at McLaren and is consistently outrun by teammate Lando Norris and next year is being replaced by countryman Oscar Piastri, a rookie.

As for the open seat at Williams, where Nicholas Latifi is not returning, American Logan Sargeant will make his F1 debut on Friday when he participates in the first practice session. He will be the first American on track during an F1 session since Alexander Rossi in 2015.

Sargeant is a Williams Academy driver currently competing in F2. The Florida native is hoping to fill the Williams seat and become the first American since Rossi in an F1 race.