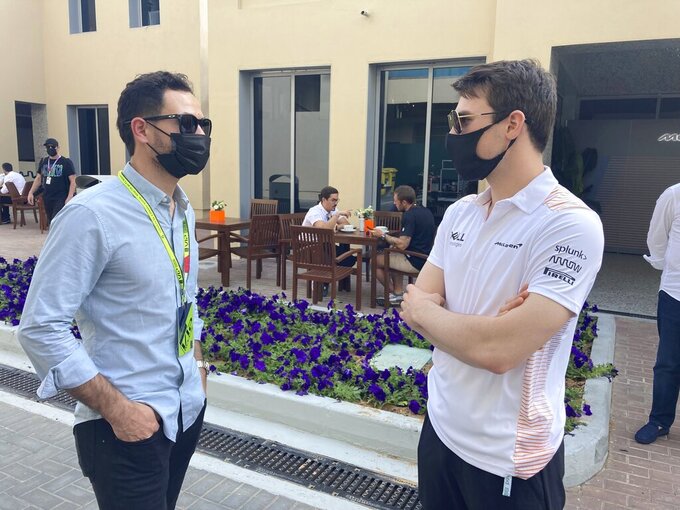 NASCAR champion Kyle Larson talks to IndyCar driver Pato O’Ward on Sunday, Dec. 12, 2021 at Yas Marina Circuit before the Formula One season-ending Abu Dhabi Grand Prix. Larson attended his first ever F1 race and O’Ward drove him around the track in a McLaren. The visit was part of his weeklong visit to Dubai and Abu Dhabi during a vacation following his Cup championship win. (AP Photo/Jenna Fryer)

ABU DHABI, United Arab Emirates (AP) — Pato O'Ward finally achieved his career-long quest to drive a Formula One car on Tuesday when McLaren put the IndyCar driver in a seat for the young driver test at Yas Marina Circuit.

The test was O'Ward's reward from McLaren boss Zak Brown for winning his first career IndyCar race this season. Brown predicted ahead of the F1 season-ending Abu Dhabi Grand Prix that the test would only make O'Ward want more and he wasn't wrong after O'Ward drove a car he said “bends the laws of physics.”

“I'm at a loss of words,” O'Ward said. “The experience and the opportunity is rare, once in a lifetime, and wow, wow, these cars are ridiculous. I was expecting crazy and insane, and this is crazy and insane times 10. I thought the Indy car was fast, and my eyes, man, it was just crazy.

“This is the best experience I've ever had in a race car in my life. I don't think anything has come close, in terms of driving.”

The Mexican driver has desperately wanted to be an F1 driver but his path ended in 2019 when Red Bull cut him from its program after six months. Red Bull had wanted O'Ward to move up the F1 ladder and he raced a Formula 2 car and in Japan's Super Formula category.

He suffered a setback in his pursuit of the super license needed to enter the world championship when the FIA reduced the number of points O'Ward had earned for winning the 2018 Indy Lights championship because of how few cars competed that season. Red Bull let him go and Brown immediately snagged him to drive for Arrow McLaren SP in IndyCar.

He has spent two full seasons in IndyCar now, and this year won a pair of races and was in the championship fight all the way to the finale. He finished third in the standings.

O'Ward's performance bonus was his long-awaited test in the McLaren and he completed 92 trips around Yas Marina Circuit. He was on the track with other young drivers, including Logan Sargeant, a 20-year-old American who tested for Williams.

“We’ve been very impressed with Pato’s speed, his attitude and how rapidly he’s learned,” said Andrea Stella, executive director of racing for McLaren.

O'Ward called the car a “rocket ship" and marveled at the grip. His neck was aching by the end of the day, though, from the G forces and loads in the car.

“My neck is destroyed,” he said after making a qualifying run. “As soon as we put those softs (tires) on and we went through the fast corners ... the issue was for me, I know where I lost some time, the corners where you are limited by your neck strength, which I knew was going to be a problem at the end of the day because this is completely different. It's nuts compared to anything else that is available to drive out there."

O'Ward tested alongside McLaren regular driver Daniel Ricciardo with Lando Norris watching. Norris, who has become friends with O'Ward, tests Wednesday and was eager to see how the IndyCar driver did.

“I think IndyCar and Formula One are extremely different end points and F1 is another level compared to IndyCar, basically everything in terms of speed, in terms of grip, downforce, technicality, everything,” Norris told The Associated Press. "I know how good of a driver he is, but I also know he's an aggressive little driver, that's not necessarily the thing you want when you get to Formula One.

“He might have to adjust his driving a bit, and whether that's going to be good for him or bad for him, I'm not really sure,” Norris said. "One thing I know is he likes to be on the edge a lot of the time in life, especially with driving, and that's not always the best thing.”

O'Ward does not have a super license, and both Ricciardo and Norris have contracts with McLaren. Brown said O'Ward will be in IndyCar for now.

“He's very fast, he's exceptionally talented. Formula One is a different world with the level of technology, so what I am most interested in is less about can he drive a Formula One car fast, I don't have any doubts about that,” Brown told AP. "But how does he take in the information and all the simulation that you have to do in the race runs and the qualifying because a Formula One car, there's a lot more for the driver to do than just drive.

“He's definitely in IndyCar next year and is with us for the long term, so we're going to take it one step at a time. But I can't imagine it's not going to whet his appetite to say I'd like to do that again.”

Yes, O'Ward wants to do it again — “I told Zak, you are going to be spoiling me and I'm going to be annoying you after the test and I didn't prove myself wrong,” — and he desperately did not want Tuesday to end.

But he won't leave McLaren or change his present trajectory in an effort to get F1.

“I'm very happy where I am right now in IndyCar, I am going to be an IndyCar driver next year with Arrow McLaren,” O'Ward said. “If I do make a move over here, it's going to be straight from IndyCar, I don't plan to go to any junior (categories). It would be a move straight from IndyCar and I don't think I would have an issue with it, I ended up (feeling) very at home (in the car)."