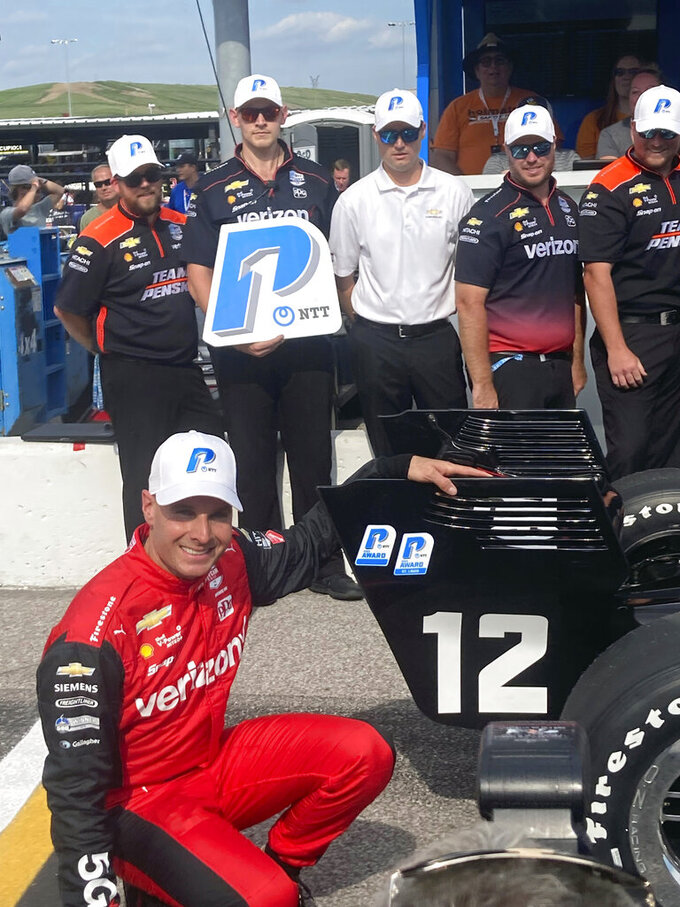 IndyCar points leader Will Power, of Australia, poses by his car after qualifying on the pole for Saturday night's IndyCar auto race, Friday, Aug. 19, 2022 at World Wide Technology Raceway in Madison, Ill. It was the 67th pole of Power's career to tie him with Mario Andretti for most all-time in IndyCar. (AP Photo/Jenna Fryer)

PORTLAND, Ore. (AP) — As IndyCar speeds into the final two races of its season and the tightest championship race in nearly two decades, a top contender has taken an early hit.

Josef Newgarden was penalized six spots Friday on the starting grid because Team Penske changed his engine ahead of the Portland Grand Prix. At a circuit that is difficult to pass, the penalty has put the two-time IndyCar champion in a quick deficit.

Newgarden remained optimistic he can overcome the setback and leave Sunday's race still in the running for a third IndyCar title.

“I wouldn't say it's ideal, but I don't know that it is make-or-break,” Newgarden said Friday. “Hopefully it's not a huge negative and I don't think it will be.”

Will Power holds the IndyCar points lead with two races remaining — this Sunday at Portland and next Sunday at Laguna Seca in California. But his lead has been sliced to just three points by Newgarden, his Team Penske teammate who raced to his fifth victory of the season in IndyCar's last outing to pull right into Power's rearview mirror.

But there's no breathing room at all in this title fight: Scott Dixon, the six-time champion, trails Power by 14 points as a trio of Chip Ganassi Racing drivers are challenging the Penske teammates. Indianapolis 500 winner Marcus Ericsson is 17 points out, while reigning IndyCar champion Alex Palou is fifth in the standings, 54 points back.

The contenders actually includes Scott McLaughlin and Pato O'Ward at sixth and seventh in the standings because both remain mathematically eligible to win the title. Any driver who trails the points leader by 54 points or more after Sunday's race will be eliminated and O'Ward is currently 58 points behind Power.

This intense championship fight has seen seven lead changes this season between Power, Newgarden, Palou, Ericsson and McLaughlin and the three points that separate Penske teammates Power and Newgarden is the closest margin with two races remaining since 2008. The 43 points separating the top five drivers in the championship is the tightest title chase since 2003, when 41 points separated the top five.

The Ganassi goal is clear: Chip Ganassi has told his three contenders he wants them to finish 1-2-3 in the title race and his drivers should race each other clean through the checkered flag next weekend in Laguna Seca.

“Rule No. 1 is don't take your teammate out,” Dixon said. “Everybody obviously races to win, but there's some respect required when racing your teammates.”

Dixon also noted that Penske driver McLaughlin seemed to deliberately move out of Newgarden's way two weeks ago at Gateway to help Newgarden win the race. McLaughlin was the leader on the final restart, controlled it and pulled out to a nice lead before Newgarden easily reeled him in and won his fifth race of the season.

Asked by The Associated Press after the race at Gateway how Newgarden caught him so quickly, McLaughlin credited “the slipstream effect. I did all I could to try and break away as much as I could.”

But when asked by AP why it seemed McLaughlin was standing still as Newgarden rocketed past, he demurred.

Power said that team owner Roger Penske gave his drivers a briefing ahead of Gateway and cautioned them against needlessly racing one another and costing the overall team effort. But Newgarden's interpretation of the boss' orders seemed to be that winning is the ultimate goal.

“When it's time to go, it's time to go, and Roger understands that. But he wants us to do it in the best way possible. Race hard, but race fair and don't take each other out. But things sometimes happen. All you can do is try to make it as fair as possible.”

IndyCar rookie Callum Ilott has settled comfortably into the series with an active role at Juncos Hollinger Racing. He agreed in July to a contract extension to return next year to what Ilott is expecting to be an expanded two-car team.

Although he has no control over who the team hires for a second seat, he's been vocal with Ricardo Juncos on possible hires. At the top of his list? Current Arrow McLaren SP driver Felix Rosenqvist.

Rosenqvist will be pushed out of his IndyCar seat with McLaren if Palou is freed from his contract with Ganassi, a process that is both currently in arbitration and winding itself through the courts. McLaren wants to move Rosenqvist to its new Formula E team, but the Swede wants to remain in IndyCar.

“Felix, I would love to have him and I think he would be one of the best options we can get,” Ilott told AP. “I would open my arms for him. Out of everything, I think that would be the best situation for who we could get because he's got the most experience and he's a great guy as well.”

Ilott came from the European system and although he's technically still a member of the Ferrari Driver Academy, he said he's disconnected from the F1 world right now and has no real remaining responsibilities. It's made IndyCar his full focus, and he's not sure if other young European drivers who have financial backing but can't break into F1 will follow Ilott and fellow rookie Christian Lundgaard to the United States.

He said JHR isn't actively searching for a driver who brings a budget to help with the expansion, but that the team would consider someone making the jump from Europe.

“I know how difficult it was for my side as an F2 guy coming over to IndyCar, I think it was a challenge and there will be a lot they would have to learn from me,” Ilott said. “Is it developing us as a team? Probably not as quickly as Felix would.”

Ilott then hinted that JHR could be interested in a current Indy Lights driver — Linus Lundqvist could wrap up the Lights title on Sunday — or even a veteran. Ryan Hunter-Reay, who has sat out of IndyCar this season, is under a sports car contract with Chip Ganassi Racing but has also been mentioned for several 2023 IndyCar openings.

“Do you take someone from Lights who knows the tracks but doesn't necessarily know the Indy car? That's probably easier than (an F2 driver) in some ways,” Ilott said. “Or do you take someone who has maybe been in IndyCar but hasn't been in the series the last one or two years? There's a lot of possibilities out there.”

Seven-time NASCAR champion Jimmie Johnson said he's still in talks with sponsors on a third IndyCar season and said Friday that Carvana is still in the mix.

“They've not told me ‘No' yet,” said Johnson, who remains focused on putting together a full IndyCar season for 2023.

But he's also hoping to run the 24 Hours of Le Mans next season in the NASCAR joint project with Hendrick Motorsports and Chevrolet, and Johnson said he remains open to even running a Cup race next year.

Jeff Gordon, his former NASCAR teammate, is coming out of retirement this weekend to race the IMSA-sanctioned Porsche Carrera Cup North America at Indianapolis Motor Speedway. Although it's a specific project with former crew chief Ray Evernham, many believe it could be a trial to see if Gordon wants to be part of the Le Mans effort and Johnson said “man, I'd love to do that race with him.”

“I feel like I'm on the short-list for going there, but it's really a matter of waiting for the IndyCar schedule and seeing if I'm even available,” Johnson said. “I think IndyCar is tired of me asking them for next year's schedule."