NASCAR drivers feeling the hits more in Next Gen car 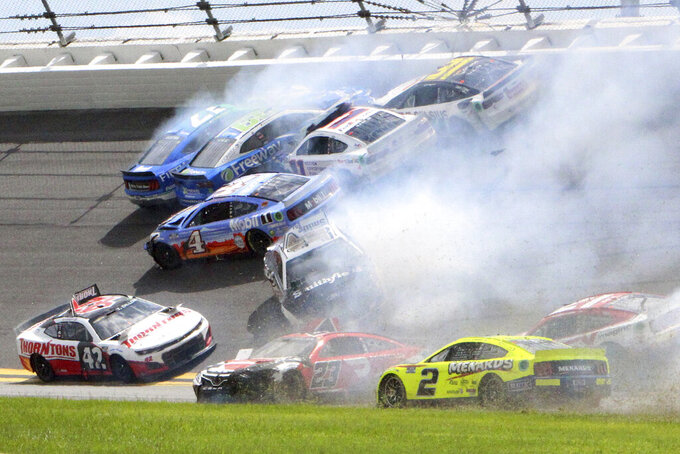 CHARLOTTE, N.C. (AP) — The jolts are more jarring, the impacts feel harder and the pain hangs on longer for NASCAR drivers in the first season of the Next Gen car.

Stories of sore backs, headaches and damaged ribs that don't heal as quickly as they did in the past are more common heading into the opener of the NASCAR Cup Series playoffs on Sunday at Darlington Raceway.

Just ask Denny Hamlin, part of massive wreck late at Daytona a week ago. He pulled out of the Xfinity event Saturday at Darlington due to continuing soreness in his neck, ribs and back.

“It feels like I got beat up in a bar and someone was kicking me in the ribs while I was on the ground,” Hamlin said of the wreck Thursday. “The whole right side, it just felt smashed.”

The issue of driver safety has taken center stage since Kurt Busch's qualifying crash at Pocono. He suffered a concussion and missed the final six regular-season races.

Busch's condition led him to surrender his playoff spot, and his 23XI co-owner Hamlin is unsure when he will return. Hamlin said Busch had “plateaued" in his recovery.

“He got to about 80% (recovered) and stayed there,” Hamlin said. “I think the rest is going to take a little bit of time.”

The Next Gen car was rolled out this season to provide a durable, competitive car that can hold down costs and bring more excitement to the track by looking like something consumers could buy at a dealership. It has certainly brought parity with 16 winners this year, including first-timers Chase Briscoe, Austin Cindric, Ross Chastain and Daniel Suarez.

Still, the buzz among the haulers and in team meetings is the average hits and accompanying pain don't feel so average anymore.

“It seems like a recurring topic,” said Chase Elliott, the 2020 Cup Series champion and top playoff seed. “And I don't necessarily think that something everybody is just making up, right?”

More evidence came in Hamlin's radio exchange with his team moments after the accident. He is heard moaning, telling them he “hurts” preceded by an expletive.

“Certainly, from my standpoint body-wise, it took a much harder hit than what I've had in the past in any other wreck,” Hamlin said.

NASCAR's ongoing crash analysis agrees with drivers: The hits are harder than in the past.

“We've heard similar things about their experiences in the car that it crashes harder or the crashes are worst,” said Dr. John Patalak, managing director of safety engineering.

“The really short answer is yes, the drivers are experiencing more severe crashes than in the past,” he continued. “But there's more to it than that.”

Patalak said analysis shows some drivers at high speeds are hitting the wall at steeper angles. While cars in the past would hit at angles of about 14 to 16 degrees, some Next Gen crashes are registering in the high teens or low 20s.

“When you look at it on paper, you think, ‘Well, what’s the big deal, 14's really close to 19?'” he said. “But it's a massive difference with the amount of energy that's going into the wall, not parallel to it.”

Two-time series champ Kyle Busch is skeptical. “The wrecks don't look as bad because the drivers are carrying the brunt of it and the car isn't,” the Joe Gibbs racer said.

“You never want to take a step backward,” Elliott said. "It's been great conversations (with NASCAR) and I think it will end up making a difference."

The car, Patalak said, was never designed as a final draft. There already have been modifications in the safety foam surrounding the driver's head. More analytics could lead to additional changes.

“Here's the bottom line, safety is expensive,” he said. “I hate saying that, but it's true.”

Logano, too, has felt the hits more this season than others. He and others have said the car is too rigid. But it's not all bad. “In some ways, it's safer than the old car,” he said.

Logano is confident the car won't cave in on the cockpit on a significant accident or rollover crash. “It's the everyday hits that are more severe than they used to be," he said. "It depends on how you want to look at it.”