McLaren plucks away Ganassi sponsor and Kanaan for Indy 500 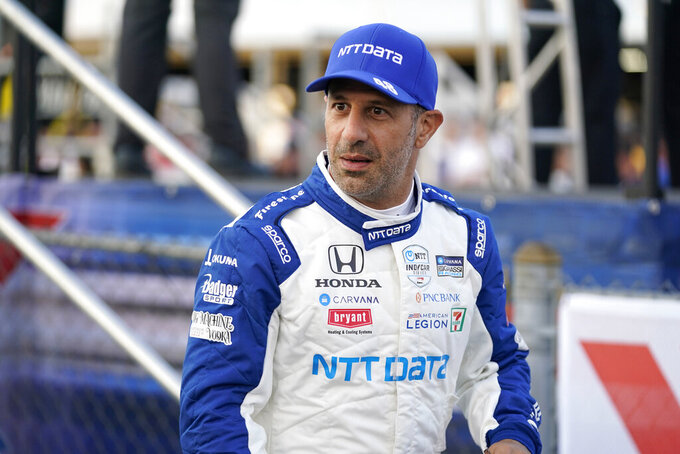 FILE - Tony Kanaan is shown before the start an IndyCar auto race at World Wide Technology Raceway on Saturday, Aug. 21, 2021, in Madison, Ill. The tit-for-tat war between Zak Brown and Chip Ganassi took another turn Tuesday, Nov. 1, 2022, when Arrow McLaren SP announced it had signed both a Ganassi sponsor and Tony Kanaan to drive the Indianapolis 500. (AP Photo/Jeff Roberson, File)

The tit-for-tat war between Zak Brown and Chip Ganassi took another turn Tuesday when Arrow McLaren SP announced it had signed both a Ganassi sponsor and Tony Kanaan to drive the Indianapolis 500.

Kanaan spent four seasons driving for Chip Ganassi Racing and the last two Indianapolis 500s. The 2003 winner finished third this past May at Indy.

Kanaan will be sponsored by NTT DATA for his 22nd Indy 500, and the technology and business solutions provider will also be the primary sponsor for Felix Rosenqvist for 10 races on the No. 6 Chevrolet.

NTT Data had been a Ganassi sponsor since 2013 and was the primary sponsor for 2020 champion Alex Palou, who spent most of the IndyCar season locked in a battle to move from Ganassi to McLaren in 2023.

Mediation led to a resolution in which Palou would finish the remaining year on his Ganassi contract and can test for McLaren's Formula One team. But Palou's sponsor is headed to McLaren early; Palou can't drive an Indy car for McLaren before he makes his official move in 2024.

“We welcome the opportunity to partner with McLaren, a long-term and valued client, and to demonstrate how sponsorships simultaneously build awareness and enhance business-to-business relationships," said Bob Pryor, CEO of NTT Data Services.

Brown and Ganassi have feuded for years but it reached a new height when Palou in July rebuked a Ganassi announcement that the option on his contract for 2023 had been picked up. He said he instead was moving to McLaren, which led to several civil court filings and the ultimate resolution for Palou to complete his Ganassi contract.

Also, McLaren team president Taylor Keil has left the organization and is expected to be announced as a Ganassi executive as soon as his non-compete clause expires. Keil is the stepson of longtime Ganassi managing director Mike Hull.

Kanaan, who spent four of the final six years of full-time IndyCar competition with Ganassi, is slowly moving toward retirement. His third-place finish at Indy in May made the Brazilian eager to return again in 2023 at age 48.

“I feel extremely lucky to get another shot racing in the Indy 500," said Kanaan, who will be part of McLaren's first four-car Indy 500 lineup alongside Rosenqvist, Pato O'Ward and 2015 winner Alexander Rossi.

“I’m excited to work with Pato, Felix and Alexander and race with the Arrow McLaren SP team. My biggest battle in last year’s race was against these three drivers so working with them and driving with them will be exciting for all of us,” Kanaan said.

Rosenqvist started his IndyCar career with Ganassi and drove the No. 10 sponsored by NTT Data for two seasons. Rosenqvist moved to McLaren ahead of the 2021 season, the first year of NTT Data's last Ganassi contact extension, and Palou replaced Rosenqvist as the driver in the No. 10.

“I look forward to representing NTT DATA once again," Rosenqvist said. “They’re a great partner and are committed to the series.”