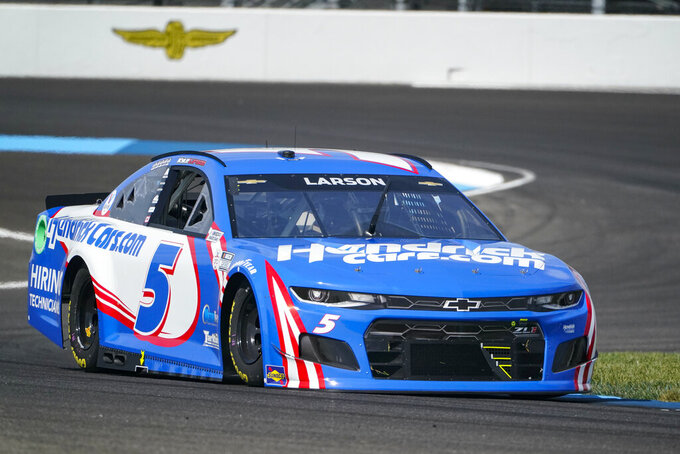 Other drivers didn't seem to mind the switch.

“I really enjoyed it," Kyle Larson said after posting the third-fastest lap in practice at 97.445 mph. “I thought it was flowing and there were some hard-braking zones. I seemed to adapt to it pretty quickly, so I was definitely pleased."

That's not good news for the rest of the field.

Larson is this season's points leader after adding his series-high fifth victory last week on the road course at Watkins Glen. The only drivers who went faster Saturday were Martin Truex Jr. at 98.021 and William Byron at 97.487.

Many wonder if the series' best drivers should even be competing on the road course. Declining attendance and complaints about passing on the 2.5-mile oval have had race organizers searching for ways to inject excitement into Brickyard weekend for years. They seemed to inadvertently find a solution last year when the Indianapolis Grand Prix was postponed because of last year's COVID-19 pandemic. IndyCar officials rescheduled it as part of a rare crossover weekend with the top two NASCAR series.

And when Chase Briscoe outdueled AJ Allmendinger and Austin Cindric in the final laps to win the Xfinity race, organizers thought it might be a preview of how it would work with the Cup cars.

This year, they brought back the three-series, three-race weekend — putting all three on the 14-turn, 2.439-mile road course for the first time while cutting the Brickyard distance in half.

The reviews have been mixed.

“It’s definitely not the same Indianapolis," said Harvick, the defending Brickyard winner. “This place is built on the history of its oval. For me growing up, as a kid this is where I wanted to race, and to come here and race on the road course is a little degrading, I guess you could say.”

It's not just the venue that's been disappointing.

After Busch's car rolled off the truck and into a sub-par practice session, the two-time series champ and two-time Brickyard winner called the course a "parking lot."

All they can do now is wait until Sunday's race to determine if NASCAR made the right call.

Brad Keselowski has known since mid-July that Sunday’s race would be his final trip to Indianapolis with Team Penske.

“Good-byes are tough and they don’t get easier,” he said Saturday. “This is a longer good-bye, which gives me time to transition. I’m trying to savor the moment.”

Dale Earnhardt Jr. has watched races from all sorts of vantage points. On Sunday, he'll be staked out in a new spot — a scissors left.

The former Cup star is expected to help call the race with NBC from the seventh turn, just a short walk from where he's staying. And it's not a spot he's completely comfortable with.

“I've never been on a scissors left in my life, so I’ll be checking the wind the next couple days," Earnhardt said Friday.

Elliott is a 9-5 favorite to win the Brickyard, according to FanDuel Sportsbook. He's finished first or second in eight of the last nine road races. ... Larson acknowledged that he has not spoken with Christopher Bell since the two tangled last weekend at Watkins Glen. After spinning Bell, Larson won the race. Bell finished seventh. ...NASCAR is running road races on back-to-back weeks for the first time since 1964. The last time it happened was the 1963 season finale at Riverside and and the 1964 season opener at Augusta. ... A.J. Foyt, the four-time Indianapolis 500 winner and 1972 Daytona 500 winner, isn't sticking around for Sunday's race. He plans to fly home to Houston before the green flag waves. ... Cup officials have had only seven weekends with practice, qualifying and races scheduled. Only one more remains on the schedule.