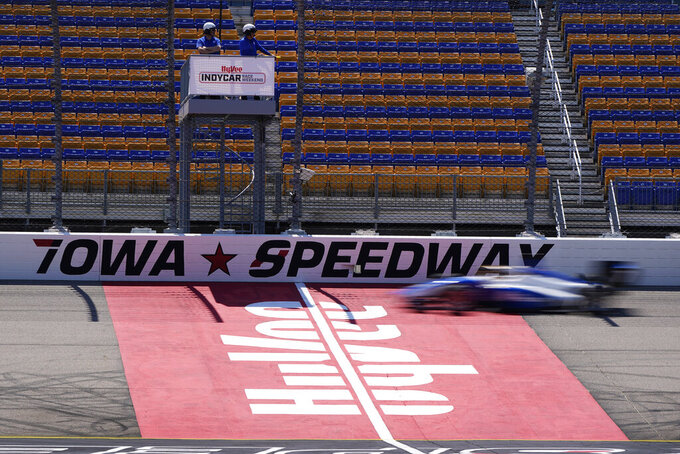 NEWTON, Iowa (AP) — The longtime premise in Iowa of “If you build it, he will come” originates with the 1989 “Field of Dreams” movie.

A twist on the slogan could be used this weekend at Iowa Speedway, where sponsor Hy-Vee has taken an “if you promote it, they will come” approach to the star-studded IndyCar doubleheader.

The grocery chain headquartered in West Des Moines has spent approximately $10 million to rejuvenate the 7/8-mile (1.4 km) paved oval built in 2006 to recruit top musical acts to perform Saturday and Sunday and stage family-friendly events all over the Iowa Speedway facility.

“I think this is a big, big deal for the city, and I don't say this in a disparaging way, but if you look at a lot of these small towns in Iowa, these small towns are struggling and they need a boost,” Hy-Vee CEO Randy Edeker said. “We feel like Hy-Vee should be investing in small-town Iowa right now. We should be out helping them grow, finding something that we can be proud of and put together three or four days that will be great for the city.”

Hy-Vee opened Iowa Speedway for free to fans for Friday's practices and expects about 40,000 spectators a day for the Saturday and Sunday races. The grocer wrote checks to sign Tim McGraw, Gwen Stefani, Blake Shelton and Florida Georgia Line for pre- and postrace concerts, and there's a competition among food trucks located across the property.

It's the kind of push that could turn Iowa Speedway into a destination IndyCar race the way its current street-course stops in St. Petersburg, Long Beach, Nashville, Toronto and next year Detroit are celebrated. Those weekends are part IndyCar race, part street festival and all-day family fun.

The race is being promoted in Hy-Vee stores across Iowa with ample signage and life-size cutouts of IndyCar driver Jack Harvey, who is in his first season sponsored by Hy-Vee at Rahal Letterman Lanigan. The British driver hails from a small English town nearly 4,000 miles away and Hy-Vee has made Iowa Speedway feel like Harvey's home race.

He said he gets stopped all over the Des Moines area — unfathomable to a Brit who has made his U.S. home in northside Indianapolis.

“I really hadn’t spent too much time in Iowa before, and I live in Indy and I’m from the U.K., and this feels like a home race for me," Harvey said. "The amount of people that stop us to wish us good luck or say so on social media is just beyond anything I’ve ever experienced. You even walk into a Hy-Vee Fast and Fresh and you still can’t really escape us, which is hilarious in so many ways, just to see my face everywhere.”

NASCAR owns Iowa Speedway but the track is leased by Penske Entertainment for the IndyCar races, and Penske has full rights to transform the facility with the massive red Hy-Vee banners and open-air temporary suites located in Turn 1.

Harvey said he's feeling the pressure to perform both Saturday and Sunday at Iowa, where Graham Rahal's third-place run in 2020 with Hy-Vee on the car helped launch the team relationship with the grocer.

But ovals have been a struggle this year for RLL: Rahal in 14th was the highest finisher at the Indianapolis 500 among the three Honda entries. Harvey, meanwhile, missed the race on the oval at Texas because of a concussion and is 20th in points. His best finishes this year are 13th, three different times, on road and street courses.

He is looking for a breakthrough in both Iowa races, and Rahal is coming off a fourth-place finish last week in Toronto.

“Globally as a team, we’ve been showing more pace, and you get the sense the season is starting to turn for us," Harvey said. "I wish I’d been better this year. Obviously, you want to have a good race because it’s a home race, but with the way the season’s gone, at this point, you just want to get a good result, so wherever you can get that positivity or that rejuvenation, I don’t care where that comes from. I’ll take it.”

Drivers are working overtime to prep for two days of racing in temperatures expected to be the hottest of the year.

The forecast calls for 100-degree Fahrenheit (38 degrees Celsius) temps for the Saturday afternoon race, and many drivers have been vocal in their wish the 250-lap event would instead be run at night under the lights.

“It's going to be really hot and really hard to recover to come back for Sunday's race,” Rinus VeeKay said. “The heat on Saturday is going to be a struggle.”

Pato O'Ward said he suspects many drivers will take ice baths Saturday night to cool down and prepare for 300 laps on Sunday, when it is expected to be about 15 degrees cooler.