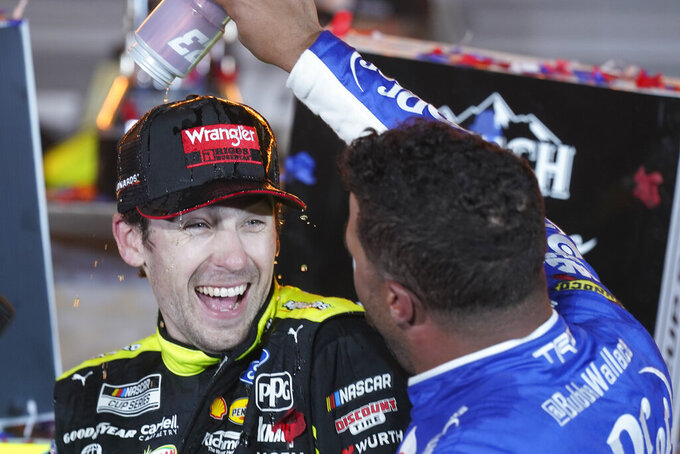 CONCORD, N.C. (AP) — NASCAR is very much still a hot ticket in its Charlotte hub.

Charlotte Motor Speedway announced a sellout for the Coca-Cola 600 on Sunday, meaning approximately 100,000 fans are expected to attend NASCAR’s longest race of the season.

Grandstand seats sold out earlier this week, and officials announced Saturday that all premium, reserved and standing-room-only seats have all been purchased as well. It will be the largest crowd for the Coca-Cola 600 since 2017.

“This being Memorial Day weekend, it is the biggest weekend in motorsports,” Marcus Smith, president and chief operating officer for Speedway Motorsports, told The Associated Press on Saturday.

“And we love being the grand finale to the greatest day in motorsports, starting in Monaco and then Indianapolis and then Charlotte with the Coke 600.”

NASCAR the past few years has made multiple tweaks to its traditional schedule but the 600 has remained untouched. It's 100 miles longer than any other event on the Cup schedule and tests teams from day-to-night during challenging changing track conditions.

“One of my goals is for our events, in particular the Coca-Cola 600, not to grow old, but to grow legendary," Smith said. "And anybody who loves to go to events, you want to go to some of those legendary events that have been around for a long time.

"It's been 63 years now, and the Coke 600 is now on our fourth generation of NASCAR fans. People have been coming to Charlotte Motor Speedway with their fathers and grandfathers and are now bringing their own kids. I think that is a really special thing for us.”

CMS track officials asked a vendor on a neighboring property to take down the Confederate flag he was flying this week — and the person agreed.

NASCAR banned Confederate flag at all events in 2020, saying it “runs contrary to our commitment to providing a welcoming and inclusive environment for all fans, our competitors and our industry.”

Smith said when fans at tracks owned by Speedway Motorsports have flown the Confederate flag they have asked them the remove them and haven't had any issues.

“People might think this is a big fight to keep it up, but it is really hasn't been," Smith said. "That says a lot about NASCAR fans and who our fan base is. ... When race fans come to a NASCAR race, we are all just NASCAR fans. We are not part of a political party or an agenda of any kind. It's just enjoying a good time with family and friends and racing.”

Goodyear has been dealing with a spate of flat tires in recent weeks, and the manufacturer said it stems from higher rear loads on the Next Gen car than what teams saw in previous Cup Series iterations.

“The balance of the Next Gen car is definitely shifted towards the rear of the car," said Greg Stucker, Goodyear’s director of racing.

Teams will utilize the same tire package seen at Darlington Raceway earlier this month and the right-side tire that has been used at Fontana, Las Vegas Motor Speedway, Kansas Speedway and Texas Motor Speedway.

Teams will have 13 sets of tires for the Cup race, including 12 sets of stickers and one set of scuffs from qualifying.

“I will be rooting for Jimmie because it will be really special for him,” Blaney said. "Talking to him, he has been having a lot of fun up there and doing a pretty good job. I always make sure I watch to see how those guys are doing. ... I know he will appreciate that he gets to do that and he is very deserving to get to run the 500.”

Tyler Reddick's results have been inconsistent this season, but he's still one to watch this weekend.

The driver of the No. 8 Chevrolet has posted top-10 finishes in both of his Coca-Cola 600 starts and has increased his overall speed this year. He has two runner-up finishes in his last five outings, but also three finishes of 30th or worse.

Keeping with tradition, drivers will feature the names of a fallen soldier on the front of their car's windshield for the Coca-Cola 600 as part of the Memorial Day weekend celebration.

“To race on Memorial Day and put a name on the windshield, I never quite feel fulfilled enough and that we’re doing enough,” said Ross Chastain, driver of the No. 1 Chevy. "We give their families just a few hours to watch auto racing and enjoy it. If it takes them away from their everyday life and the real world, that’s great that we can do that for them.”

Larson is the 5-1 favorite to repeat at the Coca-Cola 600, according to FanDuel Sportsbook.