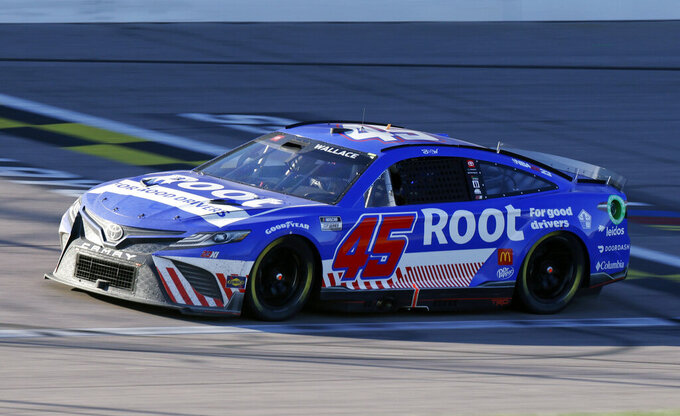 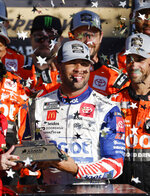 KANSAS CITY, Kan. (AP) — Denny Hamlin the driver finds himself in the most enviable of positions heading into Saturday night's race at Bristol, his second-place run at Kansas Speedway over the weekend nearly ensuring his spot in the next round of the playoffs.

The car he was chasing down in the waning laps of Sunday's race happened to be the No. 45 driven by Bubba Wallace for 23XI Racing, which is owned by Hamlin and Hall of Fame basketball star Michael Jordan. The victory pushed the team into the next round in the race for the owner's championship, the somewhat lesser-known NASCAR Cup Series title.

“I couldn't imagine a team that started from scratch — literally from scratch, we had nothing two years ago — to now have three race wins,” said Hamlin, whose team got its first with Wallace in a rain-shortened race last year at Talladega, the second when Kurt Busch piloted the No. 45 to victory lane in the spring race at Kansas.

“I can't tell you how hard it is to win in this series,” Hamlin said. “And with this five-year plan to get to a championship-contending organization, I'm the realist in the group, knowing we have a ton of ground to cover, but we're starting to get the results. This hard work is paying off. And in a few years, hopefully, you'll talk about us winning on a more regular basis.”

Well, folks are certainly talking about the team this week.

Wallace narrowly missed out on competing for the mainstream driver's championship in the No. 23 car, finishing second in the Daytona 500 and again at Michigan, when a victory at either would have guaranteed his spot in the 16-driver field.

Busch got in with his victory at Kansas, but a crash during qualifying at Pocono in July left him feeling long-term effects of a concussion. He decided to bow out of playoff consideration before the final regular-season race, but with the car still eligible for the owner's title, Hamlin and the 23XI team decided to move Wallace into the No. 45 seat.

Wallace, who has a penchant for getting flustered come crunch time, remained calm and cool while cruising around Kansas Speedway with a comfortable lead. And even when Hamlin began to nip tenths of a second off it down the stretch, Wallace kept making solid laps, keeping his boss at bay and ultimately taking the checkered flag.

In a matter of seconds, Busch was already tweeting Wallace and the No. 45 team his congratulations.

“Hate the scenario we're in with him,” Wallace said, “but he's been nothing but an advocate and leader for us. When we get back to Monday morning meetings, he's giving us insight in how to be better, and I appreciate him for that. It's taught me to be better on the racetrack, let alone off the track. He's talked about believing in self and he's always believed in me.”

When Hamlin and Jordan expanded 23XI Racing from a single car last year to two, their intent was to create an organization with multiple cars acting in concert, rather than a team where each crew blazed its own trail. And that shop synergy is a big reason why Wallace has been able to step so seamlessly into the No. 45 car.

He finished ninth in the postseason opener at Darlington before his winning ride at Kansas.

“We were trying to mesh this into where we can switch pit crew guys at any moment. When one team wins, the other crew gets bonuses as well,” Hamlin said. “We're trying to instill a very positive, one-team mentality. Having that and having the eligibility in the owner's championship, we were able to pick apart and put the best pieces in our race team to go out and compete at our best. Bubba was an easy choice for us, especially given his results the last few months.”

Wallace has certainly had detractors over the years, though, and he threw a little shade at them when he hopped out of his car on the front stretch Sunday. But it's going to be hard to find any detractors when it comes to 23XI Racing, which at least for now is looking over its shoulder at powerful Joe Gibbs Racing, Hendrick Motorsports and Team Penske.

“We know how good we are. We knew,” said Wallace’s crew chief, Bootie Barker. “And I knew how good Bubba was, how good he was all year. So I feel very happy for him, and the fact that we took it to ’em. What are you going to say now? What can you throw rocks at us about this time? I’m just happy for our whole organization.”