Ganassi wins in Canada for 4th IMSA victory of season 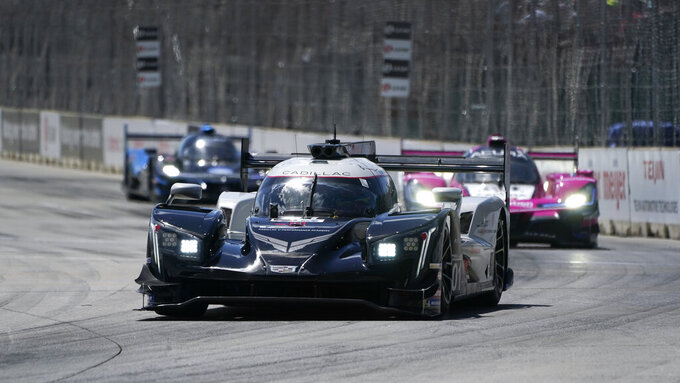 It was the fourth win of the season for Ganassi in the Daytona Prototype class, and IMSA's first weekend racing in Canada since 2019 because of a two-year pandemic pause.

Despite power steering issues, van der Zande drove the No. 01 Cadillac into a battle with Oliver Jarvis of Meyer Shank Racing in the closing minutes of the 2-hour, 40-minute race. Jarvis in an Acura was slowed by lapped traffic shortly after the race’s final restart and van der Zande pounced and slid his Cadillac in between the two cars and into the race lead.

“I knew it was time to go when we had the first few laps, and I was screaming on the radio to get traffic,” van der Zande said. “I needed traffic to get by. To be honest, it’s maximum attack, full risk. That’s what you do when you’re behind in the championship."

Van der Zande pulled away to win by 3.509 seconds for his 18th career IMSA win — and the 10th for co-driver Sebastien Bourdais. The duo also won at Long Beach and Detroit, and teammates Earl Bamber and Alex Lynn drove the No. 02 to victory at Sebring.

“We had massive power steering issues,” Bourdais said. “Honestly, I was barely hanging on. I have no idea how he did it to just put that thing up there and fight the guys around the outside with the thing going in and out, because it was just atrocious. Like, super difficult. Almost dangerous to drive. It’s all him.”

Jarvis and co-driver Tom Blomqvist finished second for the fifth consecutive race this season. But they moved into the lead in the DPi standings by 56 points over Filipe Albuquerque and Ricky Taylor of Wayne Taylor Racing.

A collision between Taylor and the No. 02 Cadillac driven by Bamber with 34 minutes to go dropped the Wayne Taylor entry from contention and to an eventual sixth-place finish.