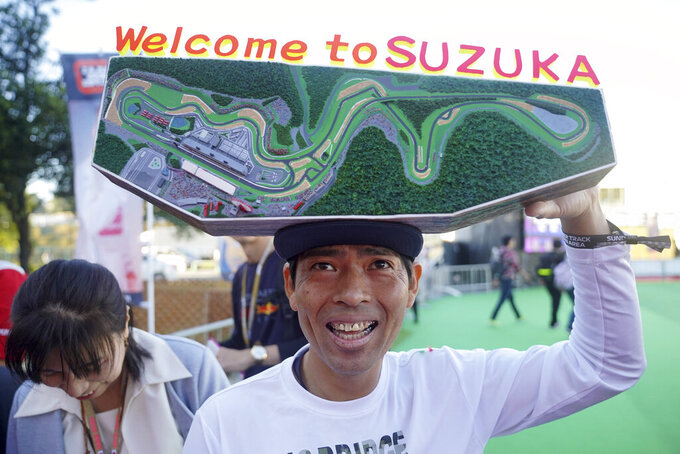 A fan with a decoration of Suzuka Circuit waits for drivers in front of the gate of the paddock ahead of the Japanese Formula One Grand Prix in Suzuka, central Japan, Sunday, Oct. 13, 2019. (AP Photo/Toru Hanai)

SUZUKA, Japan (AP) — Ferrari driver Sebastian Vettel grabbed pole position at the Japanese Grand Prix on Sunday in a windy qualifying session that was moved to race day because of the powerful typhoon that hit Japan on Saturday.

Vettel secured his first pole position since the Canadian GP in June with a lap of 1 minute, 27.064 seconds, 0.189 seconds ahead of teammate Charles Leclerc.

"It was not easy, the conditions were very different from Friday and we didn't expect to be on the front row," Vettel said. "What we had was unbelievable, the car felt light and there was a headwind which is what you like."

Mercedes drivers Valtteri Bottas and Lewis Hamilton were third and fourth, respectively, followed by the Red Bulls of Max Verstappen in fifth and Alexander Albon in sixth.

"We seemed quite strong, but we always knew Ferrari might have something in reserve," Bottas said. "In Q3 they looked untouchable."

Organizers canceled Saturday's qualifying session with Typhoon Hagibis set to hit Japan's main island. At least seven people have died while 15 are missing after the massive typhoon lashed a wide area of the country.

While the track was dry Sunday morning, lingering winds from the typhoon resulted in several crashes early in the morning session.

The Williams of Robert Kubica crashed into the wall just two minutes into qualifying bringing out the red flag.

Hamilton, who has a commanding 73-point lead over Bottas with five races left, has won here in four of the last five races.

If Hamilton is able to win here, he will equal Michael Schumacher's record for the highest number of wins at the Japanese GP with six. Hamilton won with McLaren in 2007 and with Mercedes in 2014, 2015, 2017 and last year.

Vettel has also had success here, winning four times between 2009 and 2013.