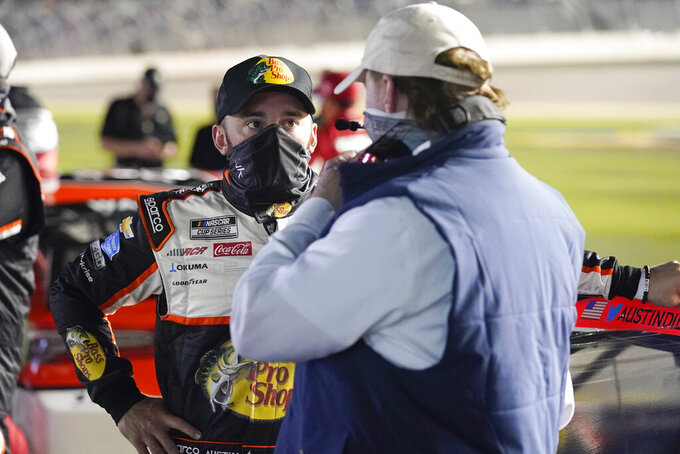 DAYTONA BEACH, Fla. (AP) — Denny Hamlin, considered perhaps the best NASCAR driver without a Cup Series championship, can look past that hole on his record. He instead points to a pair of Southern 500 trophies, a Bristol night race victory, three road course wins, six at Pocono and the big daddy of them all, the Daytona 500.

Hamlin has won NASCAR's crown jewel, the one race that can define a driver's career, three different times and the last two years. On Sunday, he will attempt to become the first to win three consecutive Daytona 500s, a feat that would forever dull the disappointment of his championship failures.

“This is something that no one’s ever done before,” Hamlin said. "Other guys have won championships, obviously. I would want to do something no one else has done.”

Hamlin is the 8-1 betting favorite but the Daytona 500 can be a crapshoot, particularly in NASCAR's condensed new schedule forced by the pandemic. Speedweeks at Daytona International Speedway for decades spanned nearly two weeks but this year was cut to just six days.

With only three practice sessions and the 150-mile Duel qualifying races, there is no clear indication who has cars capable of winning the Daytona 500.

Hendrick Motorsports swept the front row in qualifying with Alex Bowman and William Byron, but Byron crashed in the qualifying race and will fall to the back in a backup car at the start of the 500. Bowman had an engine problem that will cost him the pole if the motor needs to be replaced.

Chase Elliott is the reigning series champion but hasn't had enough time to show if he's a contender for his first Daytona 500 victory. It's also unclear how Kyle Larson, new to the Hendrick stable this season after last year's NASCAR suspension for using a racial slur, is adapting to his new team.

Kevin Harvick is looking to rebound after falling short of the series title in last year's nine-win season. He tweeted “She's bad fast” about his Ford, though it was Stewart-Haas Racing teammate Aric Almirola who won the first qualifying race and said his car is strong for Sunday.

Austin Dillon won the second duel, setting him up for a possible second Daytona 500 victory on the 20th anniversary of Dale Earnhardt's death. Dillon drives Earnhardt's famed No. 3 on grandfather Richard Childress' team and understands how emotional a victory would be in that Chevrolet.

"It would be amazing and huge for the company, RCR and all the 3 fans out there," Dillon said.

Dillon beat Bubba Wallace to win his qualifying race in a dramatic finish that showed Wallace might finally have the equipment he needs to be competitive. Wallace is the only Black racer at NASCAR's top level and gained a national platform last season for his outspokenness on social justice issues.

He landed multiple sponsors through his activism and Wallace brought that funding to Michael Jordan and Hamlin for the launch of 23XI Racing. Jordan and Wallace are the only Black majority owner and driver combination in the sport, and this team has the sponsorship and support that could finally give Wallace a chance at his first Cup Series victory.

“He wants winning race cars, he wants a winning race driver and he took an opportunity to invest in me and he has seen something that sparked his interest,” Wallace said. “We’re just going to go out and do what I know how to do, not change up anything, not try too hard because of MJ or because of Denny or because of the opportunity.”

Pitbull is another celebrity new to NASCAR team ownership. The entertainer signed on with Justin Marks to field Trackhouse Racing this year for Daniel Suarez, the only full-time Mexican driver in NASCAR.

Pitbull views his newest endeavor as an opportunity to promote multiple initiatives, most importantly his message of unity.

“If there’s anything we need in these times right now it is something that unites people, not divides people,” Pitbull said. “It’s about utilizing the culture, creating the culture through NASCAR to bring people together.”

Live Fast Racing, the third new team and one co-owned by former driver Matt Tifft and B.J. McLeod, will make its debut in the 500 with McLeod as the driver. Derrike Cope, the 1990 Daytona 500 winner, is back for what he says will be his final race and even at 62 — the oldest driver in the field — Cope believes he's got a shot.

The race will have a noticeably empty feeling because pandemic restrictions have limited attendance to roughly 30,000 spectators in the grandstands. Daytona was at capacity with 101,000 in the grandstands a year ago, several thousand more camping in the infield.

But everything has been scaled down this year and there's a heavy presence of fencing and gates to keep the competition bubble contained. Movement inside the speedway is restricted to the point Hamlin was stymied taking his usual route to victory lane.

“I felt like a mouse trying to find the cheese,” Hamlin said of trying to get to to the traditional ring ceremony for last year's Daytona 500 victory.

Hamlin, now 40 and beginning his 16th season with Joe Gibbs Racing, has made significant strides to leave his mark on NASCAR. His 44 career victories tie him with Bill Elliott, the Hall of Fame driver and Hamlin's childhood idol, and those statement victories have qualified him as one of the best of his generation.

Hamlin has grown off the track as well. He became a leader in improving communications between drivers and NASCAR, then helped organize the iRacing virtual series NASCAR used to remain relevant at the start of the pandemic.

He sought to solidify his future in the sport by moving into team ownership, a winding road full of obstacles that could have prevented Hamlin from earning a seat at the same table with Roger Penske, Rick Hendrick, Jack Roush, Gibbs, Childress and others. He pulled it off and spent the offseason building a race team.

When Wallace got that No. 23 on the track at Daytona, Hamlin shed tears.

“I know how much hard work it took to get to this point,” he said. “Seeing them push the car down the grid, everyone in uniform, car’s looking great, everything looks first class — that to me is just a huge, proud moment.”

Hamlin will be competing against his own race car Sunday, but 23XI is part of the Toyota group and aligned with Gibbs. Hamlin and Wallace will likely work together over the course of 500 miles, but when it's time to go, Hamlin will be thinking only of his own spot in history.

Hamlin last November came up short in the winner-take-all season finale for the fourth time in his career — but has nothing to prove to anyone.

“Anybody sitting on the precipice of three consecutive Daytona 500 wins, that's akin to what Tom Brady seems to do," said David Wilson, President of Toyota Racing Development. “It's a bigger story than just Denny. It's a sporting story, and for NASCAR, for Toyota, it would be huge.”